No. 4 Jersey Mike’s Subs — It’s a long way from Point Pleasant, N.J., to Portland, Ore., but that’s how far Jersey Mike’s Subs has spread during the last 57 years—ever since CEO Peter Cancro took over a small sandwich operation on the Jersey Shore in 1975 and started franchising in 1987, changing the name from “Mike’s” to “Jersey Mike’s.” For his efforts to push the brand west from the Atlantic to the Pacific, the founder of Jersey Mike’s Franchise Systems was named Entrepreneur of the Year by the International Franchise Association earlier this year for his guidance of the top franchise. 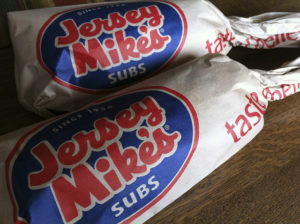 The selection should come as no surprise. Jersey Mike’s experienced steady growth in 2012, opening 92 new restaurants throughout the country, a 33 percent increase in new store growth over 2011. Today, the franchise system operates more than 600 units in 33 states, having opened its first restaurant in Oregon earlier this year. The company hopes to open 150 new units annually during the next five years to reach a goal of 1,000 units.

Reported sales for 2011 were $255 million, an increase of 16.7 percent over the previous year, making it No. 1 in system-wide sales growth in the sandwich segment, according to one publication.

With more than 5 percent of total segment sales, the company differentiates itself with an “East Coast-style” sensibility, marketing itself as a maker of high-quality “authentic subs” created from private-label meats and cheeses freshly sliced, and cheese steaks made from meats grilled in the store. Cancro has said he doesn’t consider other sandwich shops to be competition.

“Our market research has shown that our customers, if they are not coming to us, they are going to places like Chipotle or Panera, not other sub chains.”