No. 5 Schlotzsky’s — It could end up becoming one of the greatest comebacks in franchising. Less than a decade ago, Schlotzsky’s, a brand that has been around since 1971, was in bankruptcy and shuttering company-owned stores. But a change of ownership that took the publicly traded company private, brought in new executive leadership, and launched a re-branding initiative has meant a turnaround for the chain known for its oven-toasted sandwiches prepared on round rolls. 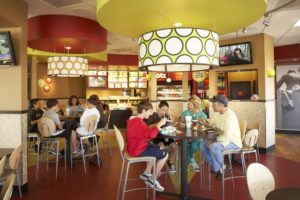 Consistent growth in recent years culminated in an announcement earlier this year of a 170-unit franchise agreement with one partner to cover a territory that includes Ventura, Los Angeles, and Riverside counties in California, stretching from just south of Santa Barbara to the Nevada/Arizona borders.

Schlotzsky’s President Kelly Roddy is credited with much of the recent success. Under his watch, a re-branding effort began at the end of 2011 with circle-themed store interiors featuring new colors and signage. The menu, with at least 15 sandwiches per store and 25 system-wide, also includes pizza and soups with the recent addition of fresh-tossed salads.

But perhaps the biggest change for franchisees is Schlotzsky’s plan for moving forward. FOCUS Brands is tri-branding Schlotzsky’s with two of its other brands—Cinnabon and Carvel Ice Cream—with all three existing under the same roof at every new Schlotzsky’s that opens.

Initial investment costs of opening a Schlotzsky’s franchised business with a Cinnabon Express and a Carvel Express inside ranges from $182,098 to $773,141. While the agreements involve greater expenses for the franchisee, the arrangement also translates into increased revenue potential for the combined business.

Schlotzsky’s has returned to top franchise status with a goal of having upwards of 700 locations by 2016, which would bring it back to where it was in 2001 before bankruptcy.