Charleys Philly Steaks decided in 2011 to return to its roots and is currently in the midst of freshening its brand, a process that includes phasing in a new logo, new designs of its restaurants, introduction of new menu items (signature lemonades and gourmet fries) and, most importantly, an emphasis on its most popular item that launched the chain nearly 25 years ago: a Philly steak sandwich made from 100 percent USDA choice steak. 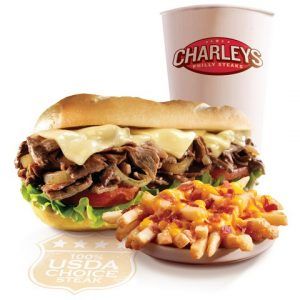 The transition from Charley’s Grilled Subs to Charleys Philly Steaks began early in 2012 and will continue over the next three years, as outlets across the country adopt the new signage and look of the stores.

Basing its decision on proprietary research and market testing, the company is taking a very prudent approach to the change in order to avoid any customer confusion or concern among its franchisees.

Charleys Philly Steaks is touting use of fresh meats, such as beef steak and all-white chicken breast without fillers, to differentiate itself from other top franchises. Plus, it grills the meat in the open, making fresh-to-order sandwiches right in front of the customers.

With more than 500 locations in 43 states and 18 countries, it continues to expand domestically and globally and recently began experimenting with stand-alone stores in Ohio and Illinois with drive-through windows and fast-casual interiors.

As it makes the leap from downplaying subs and promoting steaks, the company is making effective use of social media to successfully promote limited-time offerings and build brand awareness. And it’s involving its franchisees by establishing a worldwide competition for them to create new sandwiches for the menu. The first winner, the Hot Hawaiian Chicken Sandwich with a pineapple habanero sauce, is expected to debut on the menu this year.

To guide what could be seen as a re-branding effort, Charleys Philly Steaks has brought on a new marketing director who has experience with Fortune 500 companies such as IBM and Ford Motor Company. Its marketing strategies include increasing limited-time offerings regularly to keep customers engaged.


To read about the next franchise on our list of Top 10 Sandwich Franchises for 2013, please click here.

Next post: French Fry Heaven: An Intriguing New Franchise That Puts a Unique Twist on the Beloved Fries