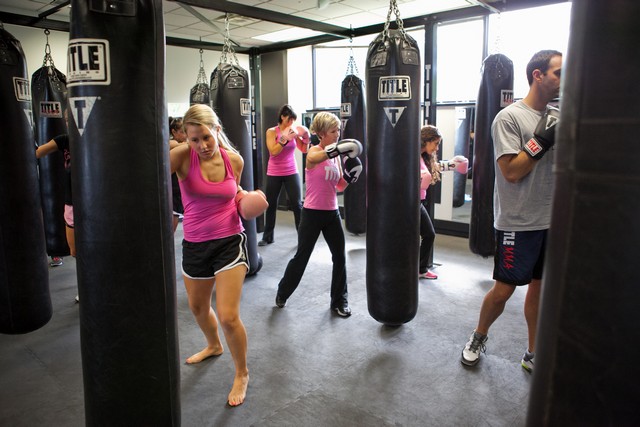 1.  At the start of August, TITLE Boxing Club announced that it had partnered with boxing legend Oscar De La Hoya and Golden Boy Productions to produce gear designed by boxers for boxers. One of the first items that TITLE and De La Hoya will be releasing are boxing gloves commemorating the 25th anniversary of De La Hoya’s gold medal winning bout at the 1992 Olympics.

2.  The rest of the Oscar De La Hoya Signature line, featuring training gloves, punch mitts, and novelty items; and the Golden Boy line, featuring professional fight gloves, protective gear, and apparel will be released throughout the fall and winter of 2017.

3.  In mid-July, TITLE Boxing Club announced that it had expanded its senior leadership team to further aid in the nationwide expansion of the brand by hiring Marty Mazer as the new Vice President of Franchise Development for TITLE Boxing Club.

4.  Prior to joining TITLE, Mazer served as the President of Opportunity Tax and Service. Mazer has also been responsible for identifying and developing franchise sales and lead generation channels for multiple high-level organizations.


5.  In his new role at TITLE Boxing Club, Mazer will be tasked with providing strategic leadership and direction for the franchise sales division in addition to putting systems in place that will improve the overall franchise sales process. Mazer wants to improve the prospecting process for franchisees and streamline the company’s lead generation strategy.

6.  Mazer also hopes to bring in successful franchisees to the brand in an effort to expand to 500 to 700 clubs within the next three years.

Plans for Expansion Into Portland and Las Vegas

7.  Following its success in 2016, TITLE Boxing Club announced that it was seeking qualified multi-unit franchisees to add five to seven new clubs in the Portland, Oregon market over the next three years. TITLE is also looking for franchisees to open five to six new locations in the Las Vegas, Nevada market.

8.  TITLE has already opened 18 new boxing clubs so far in 2017, but has plans to open at least 40 to 50 locations by the end of the year. In addition to Portland and Las Vegas, TITLE Boxing Club is targeting New York City; Long Island, New York; Philadelphia, Pennsylvania; Baltimore, Maryland; Washington, D.C.; Houston and Austin, Texas; Denver, Colorado; Atlanta, Georgia; and Chicago, Illinois for development within the next three years.

9.  TITLE Boxing Club was founded in 2008 by former boxer Danny Campbell, together with Tom Lyons, David Hanson, and Tony Carbajo, in Overland Park, Kansas, a suburb of Kansas City. The fitness club franchise was named after Title Boxing LLC, the boxing, kickboxing, and mixed martial arts (MMA) equipment company, which is owned by Hanson and Carbajo and which is also headquartered in the Kansas City area.

10.  The group opened a second location later in 2008 and a third in 2009. After seeing the success of the first three clubs, the business partners started franchising TITLE Boxing Club. Today, there are over 150 TITLE Boxing Club locations across the U.S. and one in Canada.

Part 1 – 2016 Pricing, Revenue, and EBITDA for Locations with Premium Pricing

Previous post: FDD Talk 2017: What You Need to Know About the Chick-fil-A Franchise Opportunity (Financial Performance Analysis, Costs and Fees)

Next post: FDD Talk 2017: What You Need to Know About the Charleys Philly Steaks Franchise Opportunity (Financial Performance Analysis, Costs and Fees)