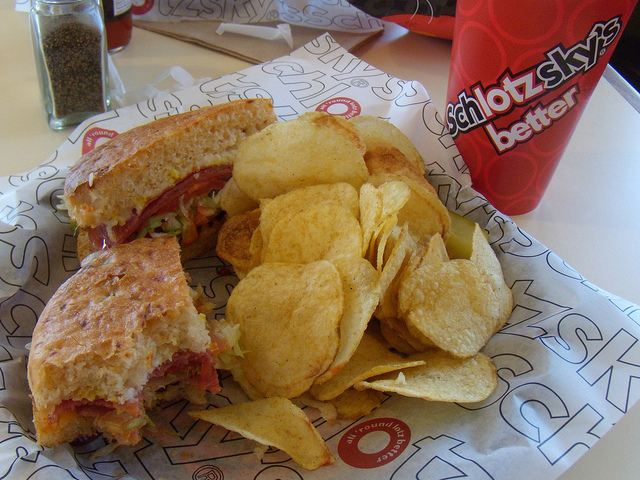 27 Things You Need to Know About the Schlotzsky’s Franchise


1.  In early January 2021, Schlotzsky’s reported that it was testing two new store prototypes in response to the COVID-19 pandemic. Numerous brands have repositioned themselves during the pandemic, but Schlotzsky’s had a head start. Before most of the country even knew what COVID was, Schlotzsky’s was reducing slow menu items and concentrating on core pizza and sandwich offerings, or as COO Tory Bartlett calls it, “focusing on doing a few things great.” Operations were streamlined to improve speed of service and accuracy.

2.  Schlotzsky’s used Delphi Display Systems’ drive-thru timers to see from an enterprise level how stores were performing and to find opportunities throughout the customer journey. In addition, drive-thru menu boards were adjusted to suggestively sell items that would perform well and that could be produced quickly.

3.  The targeted efficiencies have meshed well with a system that already leans heavily into off-premises. Eighty-five percent of stores have a drive-thru, and nearly 100 percent participate in third-party delivery. Curbside pickup, which wasn’t available prior to COVID, is also available through the mobile app. When those are thrown into a bowl and mixed with mass closure of dining rooms, dollar signs begin to appear.

4.  Bartlett said, “So it was almost like we had a crystal ball because we got the franchise system working on [efficiencies], and it really helped us. So obviously with most of our dining rooms closed pretty much right away – and even today, we have some of them still closed – the business really shifted to the drive-thru and our other channels quickly. So the brand is doing really, really well.”

5.  Schlotzsky’s push toward drive-thru – a channel that’s grown 40 percent during COVID – is quite serious. It’s so significant that the brand had been working on prototypes for more than a year, even before the pandemic instructed it to do so. The COVID crisis simply reshaped the approach.


6.  “We started looking at the business and the trends and just realized that here’s a great opportunity for just really leaning into drive-thru,” Bartlett said. “Prior, the brand’s been building larger prototypes and larger restaurants. You see a lot of brands struggling to position themselves with real estate across a lot of different markets. And the markets that we were looking at, everybody is looking for an acre with ingress, regress. We just realized there’s an opportunity to build something smaller and maybe be able to take advantage of some of these partials that were leftovers, but are still really good real estate – 0.6, 0.7 of an acre.”

7.  The first prototype is a 1,000-square-foot drive-thru only concept that has pickup windows on two sides. One side is a traditional drive-thru with a six-car stack. The other side is flexible enough to be used as a second drive-thru, curbside pickup area, or for third-party delivery staging. The other prototype is 1,800 square feet with a traditional drive-thru and 35 seats. Bartlett said that with this layout, designers placed much thought into the guest journey as they come through the restaurant, including a view of freshly baked bread as customers walk inside.

8.  A company store in Oklahoma will open a prototype in late spring or early summer. Additionally, Midwest franchisee JJ Ramsey – who operates locations across Arkansas, Missouri, and Kansas – signed a deal to open four prototypes.

9.  Bartlett added, “By redesigning the building and setting the line up differently, we’re able to do what we do with less people, which is obviously important in today’s environment, but still be able to deliver the speed and the accuracy that the consumers demand.”

10.  Going forward, Schlotzsky’s expects 99 percent of new restaurants to have a drive-thru. Bartlett notes that current stores won’t be retrofitted because the 15 percent of stores that are non-drive-thru are usually in-line or constrained by real estate in some manner. Drive-thru restaurant visits grew by 26 percent in April, May, and June 2020, and represented more than 40 percent of visits in that three-month span, according to the NPD Group. Even after dining rooms reopened, drive-thru occasions grew by 13 percent in July, which was the highest growth among on-premises, carryout, and delivery channels.


11.  Because of that industry-wide growth, Schlotzsky’s isn’t alone in betting on the future of drive-thru. Major players like Chipotle, Shake Shack, and Qdoba are increasing their investment on the channel. With higher demand for land with drive-thru capabilities, flexibility will become crucial, Bartlett notes.

12.  “You’re going out and competing with not just restaurant space – I mean banks and all these others – for these hard corners and one-acre parcels,” Bartlett said. “And as developers come in and they develop these properties, there’s a lot of opportunity for these 0.6, 0.7-point acres. I wouldn’t even call them leftovers, but they’re hard-to-use spaces. That’s where our model sits in. Because if you have good visibility, you still have good ingress and regress, and can have your drive-thru, it could be a really nice addition to the developments where their main focus is selling these larger parcels.”

13.  The emphasis on drive-thru fits into Schlotzsky’s overall goal to reach 400 stores by the end of 2023. Bartlett said the brand is focused on the Midwest, Southeast, and Southwest and will look to fill in white space with both current and new franchisees. Bartlett said he isn’t sure the restaurant industry will ever return to normal. There will be some adjustments, but for the most part, he believes consumers have gotten used to the idea of convenience. Schlotzsky’s is simply preparing for that future.

14.  On a final note, Bartlett said, “That’s why we’re leaning pretty hard into these models. And obviously there’s still going to be a demand for consumers that want to come in and sit in and enjoy their meal at the table, and we’ll have that for them. But for our system to be successful, we have to recognize and understand that consumers are going to consume our food outside of our locations more than likely the majority of the time.”

15.  At the end of April 2021, Schlotzsky’s announced its partnership with Pro Football Hall of Famer (and no stranger to training) Terry Bradshaw to develop and demonstrate a line of mouth muscle moving exercises, just in time for its new, meatier sandwiches that recently launched.

16.  According to Schlotzsky’s, the stress of the COVID-19 pandemic has caused many people to clench their jaws, which has increased jaw pain. The “Train for a Mouthful” routine consists of three exercises – The Breadlift, The Chew Chew, and The Stacks on Deck – all to help you prepare for a mouthful of sandwich:

17.  Terry Bradshaw said, “It’s no secret that I always have a mouthful to say, so when the opportunity came up to help Schlotzsky’s fans train their mouths, I couldn’t say no. My family and I have been eating Schlotzsky’s sandwiches for years, so any workout where I can enjoy my go-to – The Original with jalapenos – is a workout made just for me.”

18.  Tory Bartlett, chief brand officer of Schlotzsky’s, added, “It’s been a stressful year, and we can all use a little bit of fun these days. That is why we’re excited to team up with sports legend Terry Bradshaw to create the Train for a Mouthful regimen. We are providing customers with an engaging way to prepare for and enjoy Schlotzsky’s new, meatier sandwiches. With even more protein piled high atop freshly baked sourdough bread, our sandwiches are a delicious mouthful that guests have been enjoying for 50 years.”

20.  Schlotzsky’s also recently launched their first-ever national integrated campaign “It’s a Mouthful.” The campaign unveiled larger, meatier sandwiches at all Schlotzsky’s restaurants across the country and nods to its beloved name that alone is a mouthful. The hero of the campaign is the abundant and flavorful sandwich that started it all in 1971, The Original. The Original has 13 unique ingredients including lean smoked ham with Genoa & cotto salamis, cheddar, mozzarella & parmesan cheeses, black olives, red onion, lettuce, tomato, mustard, and Schlotzsky’s signature sauce – all served on Schlotzsky’s toasted house-made sourdough bun.

21.  Schlotzsky’s was founded in 1971 by Don and Dolores Dissman in Austin, Texas. The Dissmans initially only offered one product, an 8-inch Muffuletta stuffed with three meats, cheeses, lettuce, tomato, olives, and dressing served on hot freshly-made sourdough bread. The couple had first come across the Muffuletta sandwich in an Italian grocery store in New Orleans. The sandwich was so unique to Austin that Schlotzsky’s was a hit with locals.

22.  After a few years, the Dissmans began franchising Schlotzsky’s in 1977. By 1981, the company had grown to 100 locations. That same year, the Dissmans retired and sold Schlotzsky’s to Austin real estate investors John and Jeff Wooley and Gary Bradley. Less than a year later, Bradley left the company and the Wooleys continued to run the business.

23.  Under the leadership of the Wooleys, Schlotzsky’s expanded its menu to include specialty pizzas, toasted wraps, freshly tossed salads, gourmet soups, Panini, and other items. In 1988, Schlotzsky’s opened its first international stores in Canada.

26.  Today, there are Schlotzsky’s locations primarily around the Southern and Southwestern United States, but the brand has been expanding into other regions of the country.