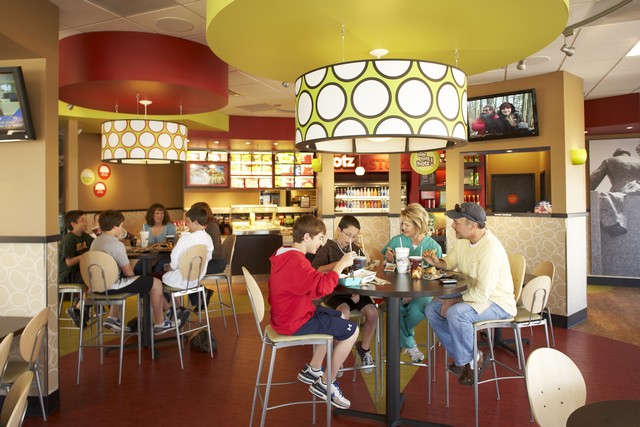 20 Things You Need to Know About the Schlotzsky’s Franchise


1.  In mid-April 2019, Schlotzsky’s said that it was continuing its transformation into the Schlotzsky’s Austin Eatery brand by rolling out the rebrand in all of its restaurants across the nation. Starting with Atlanta on April 27, Schlotzsky’s will bring its hometown tagline, “Keep Austin Weird,” to life in markets across the country.

2.  The transition marks an exciting evolution of the brand and will feature new handcrafted food and beverage offerings, an eclectic, purposeful design, and a unique dining experience. Select Schlotzsky’s Austin Eatery locations will also carry craft beer and wine selections and feature happy hours throughout the week.

3.  Schlotzsky’s Austin Eatery locations are a place that customers can enjoy for lunch, happy hour, or dinner with family and friends, featuring mouthwatering food options, comfortable décor, unique music, and attention to service. The updated menu is a combination of beloved Schlotzsky’s classics and new menu items such as made-to-order sliders, tacos, and tins – all made by layering bold and unexpected flavors and curated by executive chef Jason Moore.

4.  Kelly Roddy, then-president of Schlotzsky’s, said, “The concept is a natural evolution of the brand, tapping into our 47-year heritage while accommodating the ever-changing consumer. With the new Schlotzsky’s Austin Eatery concept, we’ve combined elements from [quick service], fast casual and casual to create a level of quality and guest experience that says, ‘We’re glad you’re here.’”

5.  To celebrate each market’s official transition, every Schlotzsky’s restaurant in the city will host a grand re-opening event complete with samples, BOGO offers, and contests. Select locations will pay tribute to the brand’s baked-fresh-from-scratch sourdough and host bread artist events featuring demonstrations, samples, and more.

6.  At the beginning of February 2019, Schlotzsky’s Austin Eatery (formerly just Schlotzsky’s) announced the signing of a 10-unit franchise development agreement that will expand its footprint in key target markets. The signed deal marks the brand’s single largest agreement since evolving to the Austin Eatery concept in late 2016.

7.  Driving Schlotzsky’s expansion are seasoned multi-unit franchisees Jordan and Terry Giles and Scott Lay of LG2 Restaurant Group. The Giles have been with Dairy Queen for more than 20 years, operating 15 locations in and around Tyler, Texas. Their partner Scott Lay has more than 20 years of experience in the commercial real estate industry, with a concentration on design and construction for quick-service restaurants. Lay has been a Dairy Queen franchisee for the past four years.

8.  Jordan Giles said, “We were actively searching for a smart investment and selected Schlotzsky’s Austin Eatery as our first foray into quick-service sandwich concepts because of the unparalleled support system and excellent leadership at the corporate level. The communication with Brand President Kelly Roddy and Franchise Sales Director James McFeeters has been top-notch throughout the entire process. We could not be more excited to kick off our partnership with Schlotzsky’s and look forward to bringing the Austin Eatery concept to select markets in Arkansas, Texas and Oklahoma in 2019.”

9.  Under the FOCUS Brands Inc. umbrella, Schlotzsky’s is actively evolving all deli locations to the Austin Eatery concept with plans to convert the entire system mid-year. The newest rendition embraces the brand’s origins with new menu items that are inspired by Austin’s food truck culture, as well as craft beers and wine, providing an environment for casual dining and socializing.


10.  The design of the restaurant has also been updated, incorporating elements of recycled wood and corrugated metal. These changes have boosted the brand into the fast casual or “fast-fine” category.

11.  Kelly Roddy, then-president of Schlotzsky’s, said, “We’re thrilled to kick off the New Year with such exciting development news. We’re grateful to have experienced operators join our brand and are eager to welcome Jordan, Scott and Terry into our growing Schlotzsky’s family.”

12.  In late August 2019, Schlotzsky’s announced that Beto Guajardo had been appointed as the brand’s new president, following the departure of Kelly Roddy, who who took the chief executive role at fast-casual Saladworks.

13.  Guajardo arrives from Starbucks, where he held the title of senior vice president of global strategy. He focused on technology, personalization, and delivery initiatives during his five and a half years with the java giant. Before Starbucks, Guajardo served in leadership roles at Levi’s Strauss & Co. and Avon Cosmetics.

14.  Schlotzsky’s was founded in 1971 by Don and Dolores Dissman in Austin, Texas. Initially, the menu only had one sandwich, “The Original,” which featured three meats, cheeses, lettuce, tomato, olives, and herb dressing on a sourdough bun. The Original was modeled after the Muffuletta sandwiches that the Dissmans ate in an Italian grocery store in the French Quarter of New Orleans.

16.  By 1981, Schlotzsky’s had 100 stores and the Dissmans decided to sell the company to real estate investors John and Jeff Wooley and Gary Bradley for $3 million. The following year, Bradley split from the Wooleys, with Bradley taking the real estate business while the Wooleys kept Schlotzsky’s.

17.  Under the Wooleys’ leadership, Schlotzsky’s expanded its menu to include specialty pizzas, toasted wraps, salads, soups, and other items. Over the next decade, Schlotzsky’s continued to grow and at the company’s peak in 2001, the company had 759 stores open and over $400 million in sales. However, within a few years, sales began to decline and the Wooleys resigned from the board in July 2004.