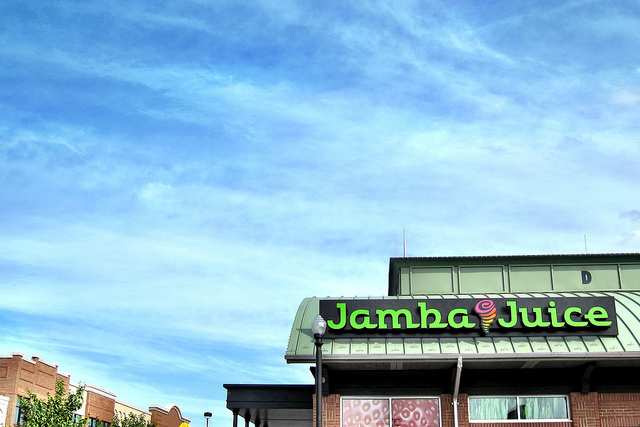 18 Things You Need to Know About the Jamba Juice Franchise

1.  In early August 2018, Focus Brands, Inc. (FBI) and Jamba, Inc. announced that the companies had entered into a definitive merger agreement under which FBI will acquire Jamba for $13 per share in cash, in a transaction valued at approximately $200 million. Under the terms of the agreement, a subsidiary of FBI will commence a tender offer to purchase all of the outstanding shares of Jamba common stock for $13 per share in cash.

2.  The tender offer is subject to customary conditions, including antitrust clearance and the tender of a majority of the outstanding shares of Jamba common stock. Following successful completion of the tender offer, FBI would acquire all remaining shares not tendered in the offer through a merger at the same price as in the tender offer. The deal was completed in early September and Jamba Juice is now a wholly-owned subsidiary of FBI.

3.  Dave Pace, chief executive officer of Jamba, Inc., said, “We are delighted to have reached this agreement with Focus Brands and are confident that it will result in a positive outcome for our guests, our franchisees and our employees. Over the last few years, we have worked hard to strengthen our foundation and reposition this iconic brand for the future. Partnering with Focus Brands will allow us to build on this work and further accelerate the Company’s growth.”

4.  After the deal was completed, Steve DeSutter, CEO of FBI, said, “We are excited to officially welcome Jamba, a leader in the smoothie and juice category with strong franchise operators and an iconic heritage, into our family of well-known and highly loved ‘fan favorite’ brands. We look forward to what lies ahead for this great brand, especially the continued growth that will benefit Jamba guests, franchisees, and employees. The addition of Jamba to the Focus portfolio of brands adds a premium beverage and lifestyle concept to our family of snack and restaurant brands. We look forward to growing this business with existing Jamba franchisees, sharing with our current roster of great franchisees, and introducing the Jamba brand to a new group of entrepreneurs.”

5.  In late July 2018, Jamba Juice announced that it was gearing up for a big expansion east of the Rocky Mountains, specifically the east coast. The company said that it was opening its newest east coast area location in Annapolis, Maryland this winter. The store will be owned and operated by Alex Estill, a 29-year-old native of Annapolis who has spent his entire career in the real estate industry. Ultimately, Estill would like to open as many as 10 more stores in the coming years.

6.  Estill said, “I am very excited to team up with Jamba Juice and bring such a renowned brand to my hometown. It has been a long-term goal of mine to open a franchise, and after extensive research in the subject I know I have found the best brand to represent in Jamba.”

7.  This Annapolis-area push comes on the heels of the company’s recent announcement to re-energize its franchise program and cover the country in a more balanced way. Today, the majority of Jamba Juice’s stores nationwide operate west of the Rocky Mountains.

8.  Loren Bontrager, director of franchise business development for Jamba Juice, said, “As we continue to expand our presence on the east coast, it’s crucial to find the right franchise partners who are not only experienced in business, but are excited to promote the Jamba Juice brand. We couldn’t be more happy about this partnership. Alex is a hardworking individual with whom we share the same values. He will play an instrumental role in further establishing our brand in the marketplace.”

9.  Jamba Juice also said that the east coast expansion will be achieved exclusively through franchising. All of the new east coast locations will feature Jamba Juice’s new store design, characterized by new technology, digital menu boards, modern colors, and contemporary elements. Bontrager added, “It’s a blend of everything our guests already love about Jamba, upgraded with a vibrant, elevated atmosphere.”

10.  At the end of June 2018, Jamba Juice announced that Vernon Davis of the Washington Redskins and Mohamed Sanu of the Atlanta Falcons had formed a joint partnership to bring more Jamba Juice locations to the Washington, D.C. metro area. Davis and Sanu are planning to develop six stores throughout the region. While no locations have been formally announced, they expect to open their first store in early 2019 in Northern Virginia, likely in Louden County.

11.  Davis, who already owns five successful Jamba Juice locations in Northern California, said, “Jamba Juice is an iconic brand that, like me, cares about helping others live a healthier, higher quality life. I honestly couldn’t be more excited about partnering with Mohamed, expanding my relationship with Jamba Juice and, of course, bringing more of the fresh fruit and vegetable goodness of Jamba to my hometown.”

12.  This recent expansion announcement comes at a time when Jamba Juice is re-energizing its franchise program and looking to expand eastward. With the majority of the company’s stores operating west of the Rocky Mountains, Jamba Juice recently announced plans to cover the country in a more balanced way and ultimately expand its presence on the east coast.

13.  Loren Botanger, director of franchise business development for Jamba Juice, added, “Anybody who knows anything about the NFL recognizes Vernon and Mohamed as two of the premier players in the game who continue to play prominent roles in their teams’ success year after year. They are strong leaders in the ultra-competitive sports world and inherently understand the importance of working as a team and as part of a system to achieve success. We’re thrilled to have both Vernon and Mohammed as part of the Jamba team.”

14.  Jamba Juice (originally called the Juice Club) was founded in 1990 by Kirk Perron in San Louis Obispo, California. Perron was an advocate for healthy living and had always been interested in starting his own business. After his workouts, Perron often bought a smoothie at his health club and he decided that he would open his own store that focused on selling nutritious smoothies. Perron recruited family and friends, including Kevin Peters, Joe Vergara, and Linda Ozawa Olds, to help him fund and start Jamba Juice.

15.  Perron’s idea for a smoothie store was so popular that the first Jamba Juice served 2,600 customers in its first weekend open. Later in 1990, Jamba Juice was incorporated as the Juice Club, Inc. and Perron started franchising the following year. Within a few years, there were nearly 20 franchises open and in 1995, Perron changed the name of the company from Juice Club to Jamba Juice Company.

16.  By the beginning of the 2000s, there were over 300 Jamba Juice locations in the country. In 2001, Jamba Juice acquired Zuka Juice, which helped expand the franchise’s presence in the Northwest, Texas, and Nevada. Two years later, Jamba Juice was sold to Services Acquisition Corp. International for $265 million.

17.  In 2008, Jamba Juice expanded its menu and began selling food, including wraps, sandwiches, salads, and flatbreads. Since then, Jamba Juice has continued to grow across the United States, South Korea, the Philippines, Taiwan, and Thailand. Over the summer of 2018, Jamba Juice was acquired by Atlanta-based Focus Brands.