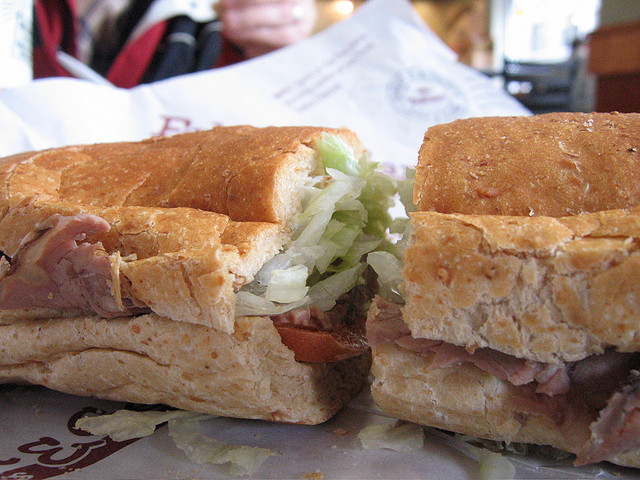 1.  In January, Erbert & Gerbert’s Sandwich Shop celebrated the opening of its 100th location. The shop, located in the Minneapolis-St. Paul area, is the second unit for franchisee Manuel Pizaño-Carlo, who signed a multi-unit deal with the company and plans to open at least three more shops in the area over the next five years.

2.  When speaking of the opening of the 100th location, Eric Wolfe, Erbert & Gerbert’s president and CEO said, “This is the future of great, gourmet in particular, sandwich concepts. People want a familiar name but a ‘touch above’ the run-of-the-mill fare of fast food.” He also says that this milestone is a turning point as the company accelerates its expansion over the next few years.

3.  To give back to its customers for helping Erbert & Gerbert’s reach this achievement, the brand featured a few special offers at participating locations from January 11-15. On January 11, the first 100 customers received any sandwich for $1 and throughout the event, customers were able to get $1 off any sandwich purchase.

4.  At the end of May, Erbert & Gerbert’s Sandwich Shop launched a new franchisee recruitment website at erbertandgerbertsfranchise.com as the company continues what it is calling a “rapidly growing expansion” across the United States. The site explains to prospective franchisees the key differentiators and advantages to opening an Erbert and Gerbert’s, such as strong support from an experienced franchise team that helps owners build a strong, scalable business.


5.  According to Erbert & Gerbert’s president and CEO Eric Wolfe, “Now is the perfect time to get involved with the Erbert and Gerbert’s opportunity, as momentum is on our side after reaching 100 stores.” The company says that its 30 years of business have helped it “hone down to a science” the supply chain, operations, and other aspects of the business for its franchisees.

6.  Erbert & Gerbert’s Sandwich Shop rolled out its newest limited-time menu option, Fit & Flavorful Wraps, to all of its locations in early October. The wraps, which are being promoted as a health-conscious option, feature the brand’s traditional flavors, but with fewer calories, fats, and carbs.

8.  Eric Wolfe, president and CEO of Erbert & Gerbert’s said, “We are always looking for ways to enhance our menu offerings. It’s about sandwiches you can’t find in a normal sub shop. It’s part of our culture. We’re so excited to offer our guests something new and unique to try.”

9.  Erbert & Gerbert’s Sandwich Shop was founded in 1987 by Kevin and Beth Schippers; they opened the first location a year later in Eau Claire, Wisconsin. The company and its signature sandwiches were named after characters in stories that Kevin’s father made up for him as a child.

11.  Erbert & Gerbert’s growth has been moderate, but has picked up in recent years. Today, there are over 100 sandwich shops across 12 states.