What I Like About the Cold Stone Creamery Franchise

1.  Cold Stone Creamery offers an extensive line of ice cream treats from personalized Cold Stone creations, to ice cream cakes, pies and cupcakes, to sundaes, shakes and smoothies.  I admire the franchise’s creativity because, from the same basic ingredients, they’ve created product extensions that appeal to their customer base, without requiring a huge additional investment in equipment on the part of the franchisees.

2.  An ice cream shop, by its very nature, is a relatively simple business to run.  In the case of Cold Stone Creamery, since most of their creations are made-to-order, not a lot of prep work is required before opening their doors for the day. 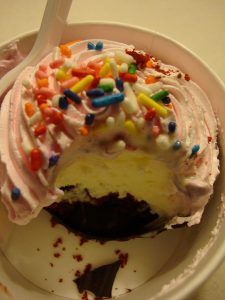 3.  The “theatrical” aspect of the whole experience appeals to the young and attracts a large number of enthusiastic teenagers eager to work there part time.  I’ve been to several Cold Stone Creamery locations and I’ve always been impressed by the enthusiasm and energy of the young people working there.

4.  Cold Stone has a very large and engaged customer base as evidenced by their over 1.5 million Facebook fans.  To put this into context, Cold Stone’s cousins in the frozen yogurt category are more fragmented, have fewer stores and Facebook fans (Menchie’s has 65,000+ fans, Yogurtland has 175,000+, and Yogen Fruz has almost 400,000).

What I Don’t Like About the Cold Stone Creamery Franchise

1.  Just like any other ice cream shop, Cold Stone’s business is seasonal.  A typical store is going to be really busy during the summer but slow in the winter, especially in parts of the country with harsh winters.

2.  An ice cream shop like Cold Stone needs to be in a high traffic location to generate the volume needed to stay in business.  This makes rental expense a huge fixed cost.  This can be a drag on the bottom line, particularly during the months of the year when business is slow.


3.  An ice cream store is typically busy right after lunch and dinner, and perhaps in the middle of the afternoon.  The rest of the day is pretty quiet.  In the case of Cold Stone Creamery, they have to make sure that the store is sufficiently staffed since most of their products are made-to-order.  This makes staff scheduling a challenge.  Franchisees have to strike a delicate balance between having enough staff to customize orders quickly when it’s busy, and not having too many idle employees when the store is dead.  (A self-service format like that of Yogurtland and Menchie’s makes this far less of an issue.)

4.  Another concern is the huge number of existing stores, now numbering more than 1,500 in 17 countries.  This limits the number of lucrative territories still available, and existing stores will likely suffer whenever a new store opens nearby.  Other franchise concepts may have far more units, but Cold Stone sells ice cream treats that are probably a weekly indulgence at most, as opposed to Subway and Starbucks which are more frequent destinations.