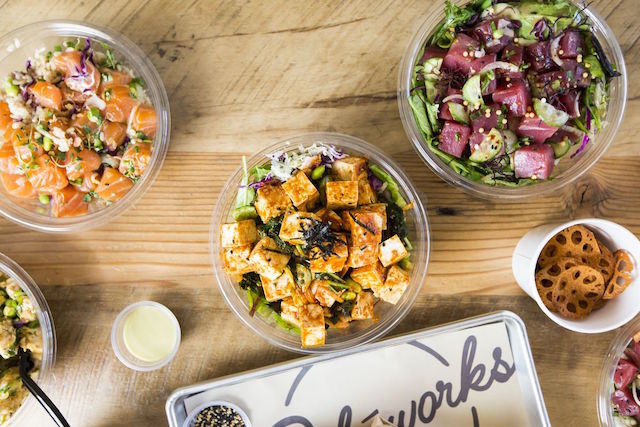 This annual list of the best poké bowl franchises was posted on September 24, 2022.

Originally a way for fishermen to eat the offcuts from their catch, poké is a Hawaiian dish centering on raw fish. It has become increasingly popular since the 1970s, an ambassador for Hawaiian culture stretching into the American mainstream. In recent years, the endless search for new eating experiences among the American public and the restaurant industry has pushed poké to a more prominent place. While still not as widespread as burgers, barbecue, or sushi, its popularity is undoubtedly on the rise, creating opportunities for franchises.

The American poké industry is currently worth around $1 billion. Over 2,400 businesses employ around 39,000 staff serving poké to thousands of customers. Poké consumption has been growing by 6.99% per year, and this looks set to increase now that the economic disruption of the COVID-19 pandemic is fading. The global poké industry is predicted to see annual growth of 8.41% from 2022 to 2026 and American businesses are a huge part of this. 71% of the market’s growth is expected to come in North America.

A growing awareness of the importance of healthy eating, alongside a push to point out poké’s nutritional benefits, has undoubtedly played a large part in the industry’s growth. With its emphasis on raw ingredients, lack of additives, and low fat content, traditional poké is a perfect fit for customers concerned with clean living. It’s a style of food that often focuses on simplicity, the ingredients are obvious and usually nutritious, and the trend for raw food has fed into poké’s appeal.

While mass produced restaurant poké may not be as clean-cut healthy as the original dish, thanks to issues of processing and preservation, it has benefits over many alternatives, and the image of healthy eating is as commercially important as the reality. Rich in omega-3 fatty acids and protein, fish-based dishes are a frequent favorite among healthy eaters, and so poké has slipped neatly into this niche.

The rise in grab-and-go food has also contributed to poké’s growth. Poké restaurants often serve takeout food, allowing customers to add variety to their lunch runs and to put novelty into an otherwise humdrum working day.

Traditionally, poké has been predominantly made with tuna, with shellfish and octopus providing common variations. As the industry has grown, the options on offer have expanded, with poké chains bringing in touches from other cuisines or trying entirely new combinations. Lobster and caviar are among the alternative ingredients now on offer. Traditional additions like seaweed and candlenuts have been joined by Asian influences such as soy sauce and chilis, and now by a wider range of variations in the melting pot of American cuisine. Edamame and avocado have become popular, as ideas have been brought in from the other popular raw fish dining experience of sushi.

Of course, poké restaurants seldom just sell poké. Drinks, desserts, and other options for main courses mean that restaurants can cater to a wider clientele. Aside from drinks, the most common accompaniments for poké are bread and sushi, as customers expand their meals. Some want to add carbs to fill up, while others want to cut them out entirely, switching from rice to salad for a low calorie meal. Because poké is often assembled in the serving bowl, it’s simple to adapt to a customer’s requests.

The poké market is currently quite fractured, making it easier for new brands and outlets to establish themselves. Between this and the industry’s growth, this looks like a good time to get into poké, before the market reaches saturation or big players take a dominant place. In the longer term, there are challenges coming. Falling fish stocks are likely to affect the poké market, pushing up the prices for ingredients and putting a squeeze on profits. The same forces pushing up prices may disrupt supply chains in coming years.

Poké is on the rise, a healthy, tasty, novel alternative for Americans looking for a quick meal. While there are challenges ahead, it’s a market that looks promising in the near term.

Pokeworks features Hawaiian fusion cuisine with fresh ingredients and a fish-forward menu focused on poké bowls and poké burritos. This is a chef-driven concept with Signature Works, Poke Your Way (customized), and New at Pokeworks limited-time bowls, all rooted in Hawaii’s culinary culture but combined with other world cuisines. Sustainability is a core value and goal at this fast-casual restaurant chain that is the largest poké franchise in the US.

Founded by Peter Yang, Michael Wu, Kevin Hsu, and Kasper Hsu in New York City, New York in 2015 and franchising since 2016, the number of locations currently stands at 63 (up from the previously reported total of 56), of which nine are company-owned and two are located outside the US.

Those who don’t want to build their own can choose from among four signature bowls (Spicy Tuna, Salmon, Traditional Tuna, or Vegetable Poke).

Founded by Mark Setterington and Paul Reas in Winter Springs, Florida in 2017 and franchising since 2018, there are currently 23 locations (up from the previously reported total of 18), of which only one is company-owned and all are located in the US.

Just Poké offers up six signature poké bows, three “torched” bowls (meaning the protein is cooked, including shrimp tempura, torched crab, torched salmon, or torched eel), and build-your-own bowls (base, protein, sauce, mix-ins, and toppings). The menu’s 11 different sauces include some that are spicy and one that is gluten-free.

Sustainability is a top priority in both restaurant buildouts and ingredients. Store construction uses recycled materials, energy efficient lighting, low-VOC paint, and no cheap plastic inventory. Menu sustainability includes salmon from Best Aquaculture Practices (BAP) certified producers with complete traceability from boat or farm to delivery, and is the world’s most trusted, comprehensive, and proven third-party aquaculture certification program, as well as tuna that is line-caught by hand in the Pacific Ocean using methods that are dolphin, sea turtle, and sea mammal safe. The company has been certified as an Ocean Friendly Restaurant by Surfrider Foundation for its pledge to use less plastic and take other steps to help protect oceans, waves, and beaches.

Founded by Danny Brawer and Norman Wu in Kirkland, Washington in 2016 and franchising since 2020, the number of locations currently stands at 20 (up from the previously reported total of 13), of which four are company-owned and all are located in the US. The company website lists another 16 locations as “coming soon.”

Aloha Poke Co. is dedicated to providing fast, fresh-packed, and tasty bowls filled with sushi-grade fish and Hawaiian-inspired raw ingredients. The emphasis here is on a “build your bowls” approach to customizing poké bowls while also offering more dietary considerations than competitors, from avoiding certain allergens to diets such as vegetarian, pescatarian, vegan, ketogenic, paleolithic, raw, gluten-free, and more.

The company is also committed to sustainably sourced seafood and ethically raised chicken (free-range, vegan fed, no antibiotics). The company’s Atlantic salmon are farm-raised in the cold coasts of southern Chile to maintain their naturally high fat and oil content without added antibiotics. All their ahi (yellowfin) tuna is manually line-caught by fishermen in the Pacific Ocean using sustainable practices.

Founded by Zach Friedlander in Chicago, Illinois in 2016 and franchising since 2019, the current number of locations is 19 (up from the previously reported total of 13), of which 12 are company-owned and all are located in the US.

Poké Mahi is committed to capturing the vivid elements of Hawaii inside each poké bowl they make, infusing poké with Asian flavors without compromising the traditional qualities of the dish. The chain takes the build-your-own approach to their bowls, including six base options, six protein options, two veggie options (onions, cucumbers), four sauces (non-spicy, mild, medium, and spicy), 10 different toppings, and three dressings (Poki Spicy Sauce, Miso Dressing, and Sriracha).

Founded in Naples, Florida in 2019 and franchising since 2020, there are currently 15 locations, of which none are company-owned and all are located in the US. The company website also lists another eight locations as “coming soon.”