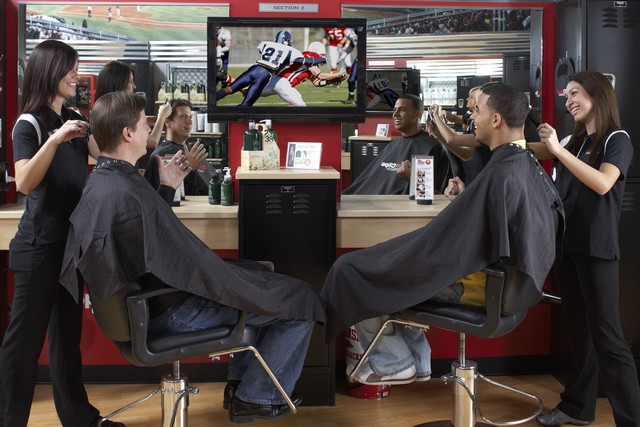 16 Things You Need to Know About the Sport Clips Franchise

1.  In mid-May 2021, Sport Clips announced that it was adding to its leadership team with human resources professionals Allyson Young, SPHR, as chief people officer and Danielle Robinson, SPHR, SHRM-SCP, as Topgrading director.

2.  Young has been a friend to Sport Clips through her work with the brand’s first franchisee Ken Schiller, who founded K&N Management, the owner and operator of Austin-area Rudy’s Country Store & BBQ and Mighty Fine Burgers, Fries and Shakes restaurants. She has also worked with Sport Clips on Malcolm Baldrige Framework leadership and training. She will lead a strong human resources team and oversee talent acquisition, management, and engagement.

3.  Prior to her 23 years with K&N Management, Young worked as a trainer for Outback Steakhouse and training manager for Fox & Hound. She is a recipient of the prestigious Baldrige Foundation Leadership Excellence Award and has trained staff of more than 100 different organizations on the Malcolm Baldrige Framework focusing on performance excellence. She holds a BA in English from Texas A&M University.

4.  Robinson joins Sport Clips as Topgrading director where she will be responsible for adapting and implementing the Topgrading selection and coaching system across the company. She will work closely with the franchise’s leadership, talent acquisition, and human resources departments as well as with company-owned stores.

5.  Robinson spent 13 years with In-N-Out Burger and later joined K&N Management as its Topgrading director where she focused on recruitment and hiring for almost 14 years and was integral in the company’s receipt of the Malcolm Baldrige National Quality Award. She holds a BA in English from California State Polytechnic University, Pomona.

6.  Edward Logan, president and CEO of Sport Clips, said, “As Sport Clips continues to focus on operational excellence and growth, Allyson and Danielle will bring exceptional experience across many facets of human resources impacting a franchise of our size and market position. As a company, we are well-suited to push beyond the challenges of the past year and move forward in serving our clients, franchisees, stylists, and team members as the haircare provider, business opportunity, and employer of choice.”

7.  “Allyson and Danielle bring to the system a winning mindset, having driven the successful application process for the national and exclusive Malcolm Baldrige Award, becoming only the second restaurant organization to ever achieve the award. Their strong backgrounds of increasing internal and external engagement with everyone who interacts with the Sport Clips brand will translate well into our franchise business model,” said Logan.

8.  In mid-January 2022, Sport Clips presented a record-breaking $1.55 million check to the Veterans of Foreign Wars of the United States (VFW) Foundation to provide scholarships for service members and veterans. As the nation’s leading provider of men’s and boys’ haircare, the veteran-founded company began work with the VFW in 2013 to offer Help A Hero Scholarships for returning military to prepare for civilian careers that often require additional college, graduate, and technical degrees and training. Since the creation of the program, Sport Clips has donated more than $10 million to the VFW’s Help A Hero Scholarship program.

9.  Additionally, the VFW and Sport Clips announced that 146 student veterans will receive scholarships for the Spring 2022 semester, totaling nearly $650,000. This brings the number of scholarship recipients to 2,200 and makes the program one of the largest veteran support programs of its kind.

10.  Gordon Logan, Air Force veteran, VFW Life member, and founder and chairman of Sport Clips, said, “Helping ease the financial burden of going back to school is a very real way our Sport Clips team members, clients, and product partners say ‘thank you’ to those who serve in the military and their families. It’s gratifying to see thousands of veterans…single moms, doctoral candidates, seminarians, technicians…going back to school with the help of these scholarships on their way to meaningful civilian careers.”

11. Fritz Mihelcic, VFW national commander, said, “The VFW, along with the veterans, service members and military families we serve cannot express enough our appreciation to the entire Sport Clips team, network and partners for their generous support. Their dedication to America’s student veterans is truly remarkable and serves to make a lifelong, positive impact in the lives of so many.”

12.  Some $122,000 of the donation this year was from Sport Clips’ own $2 per haircare service made by the company on Veterans Day while clients, individual supporters, and Sport Clips team members donated the most generous portion of money raised in stores and through virtual walks. Sport Clips partners Direct Beauty Express, John Paul Mitchell Systems, Nioxin, Sexy Hair, Gibs Grooming, and Actiiv also made substantial contributions.

13.  Sport Clips was founded in 1993 by Gordon Logan in Austin, Texas. At that time, Logan felt that there was room for more competition in the men’s and boys’ haircut markets. He also wanted to create a place where men could feel comfortable while receiving all the grooming services they needed. Logan put together a group of industry professionals and they developed the idea for Sport Clips. The salon has a sports-themed concept and provides affordable and high quality grooming services.

14.  The first Sport Clips was a success and Logan expanded into Houston and Dallas. Logan continued to open new locations in areas where Southwest Airlines flew, to keep travel expenses at a minimum. Franchising officially started in 1995 and initially, growth was slow and steady, taking five years to reach 50 locations. However, by the early 2000s, Sport Clips’ growth picked up and by 2007, there were 500 stores in operation. In 2012, Sport Clips opened its first international location in Canada.

15.  Today, there are Sport Clips locations in all 50 U.S. states and several throughout Canada.

Average of All Stores