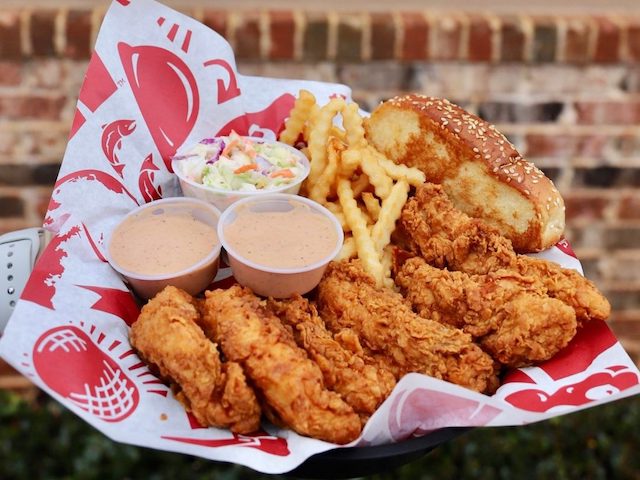 Co-founders Todd Graves and Craig Silvey wrote the business plan for Raising Cane’s while attending a course on business writing in the 1990s. The plan only received a C- grade, and was subsequently rejected by numerous investors, but the pair persisted. They saved up at their day jobs and obtained a loan from the Small Business Administration with which to found their first restaurant.

The original Raising Cane’s was located near the Louisiana State University campus, where student support helped it to thrive. A second outlet two years later turned it from a one-off into a chain and brought the company to a wider audience. Silvey left the company around that time, to return later as an employee, and it was in Grave’s hands that it’s seen a rise to massive success.

Twenty-six years on, Raising Cane’s is the fastest-growing chicken chain in America, having opened its 600th store in January 2022. The company plans to open 100 new locations in 2022, creating 15,000 new jobs. So how has it reached this level of success, and what does that mean for franchisees?

Cane’s brand rises above the bare minimum required for success as a fast food outlet. Quality furnishings and friendly staff make for a welcoming atmosphere. The quality of the food is also important: the chicken is all breast tenderloins, considered a premium cut, and these are delivered fresh rather than frozen, cooked to order rather than in advance.

One of the criticisms of the original Raising Cane’s business plan was that a restaurant serving only chicken fingers would never take off in South Louisiana, a prediction that proved to be completely wrong. The success of Raising Cane’s is built on a limited menu of chicken finger meals. By focusing on this product, rather than providing a wide range of dishes, they aim to ensure that they provide a good product quickly and conveniently.

Cost is also a factor – like many fast food franchises, Raising Cane’s restaurants serve food at a cheap price and make small margins on large volumes of meals. It’s affordable and profitable, a win-win.

Though its style is distinctly American, Raising Cane’s has expanded abroad, opening its first overseas restaurant in Kuwait in 2015 and expanding from there. This involved some adaptation, ensuring that the menu was halal and dropping the company’s dog mascot, which has less positive associations in Kuwait than in the US. Growth in the Middle East has followed, as a menu consistently focused on chicken appeals in a region where pork is off the menu.

Raising Cane’s as an Employer

Raising Cane’s works hard to be a good employer, and staff are encouraged to have fun while working. The positive working atmosphere has gained recognition in the press. The company made it into the top 100 of Forbes’ lists of best employers for women and best employers for new grads. Glassdoor labeled the company one of the 100 best places to work in 2021.

During the early days of the COVID-19 pandemic, as sales fell 30%, the company refused to lay off or furlough staff. Some were instead given work sewing masks for local medical providers, while the company waited for a pivot toward drive-thru food to revitalize its sales. With these sales keeping the business afloat, the company resisted the urge to rush into reopening, protecting both employees and customers. It later announced the distribution of $2 million to staff who had lost working hours thanks to the pandemic.

One of the reasons for the positive atmosphere at Cane’s may be the connection between staff on the ground and those running the show. Cane’s corporate employees are trained as fry cooks and cashiers when they join the business, meaning that they understand the reality for the people their policies and strategies will affect. They also wear golf-type shirts with the company’s logo rather than business smarts, reducing the disconnect from serving staff.

This training has helped the company in a turbulent post-pandemic employment market. When they struggled to find enough recruits, corporate staff were sent back to the cash registers and kitchens, doing the basic work of the restaurants while organizing recruitment events.

While the company has employed championship-winning university basketball players as a publicity-grabbing novelty, its recent marketing focuses on its ordinary employees. By featuring them in ads, the company has built upon its friendly, approachable persona, while reinforcing the message that it’s a good place to work, an important signal to send out when labor markets are still rebalancing.

That said, the company seems less supportive of franchisees. There’s little technical support or guidance for franchisees, who are largely left to sink or swim on their own, and it isn’t currently taking on new franchises. It seems that this is a company more comfortable in its role as an employer, where it can maintain its own reputation, than putting that image in the hands of others.

Raising Cane’s is currently focused on setting up company-run restaurants, and so is not taking on new franchise outlets, though the company is still working with its existing franchisees. They invite recommendations for locations, and this might be a way to make a connection for if they open up franchising again. But this is a long shot, and given the company’s current relationship with franchisees, one that’s probably not worth taking.

Previous post: How Much Is a Style Encore Franchise? (Detailed Franchise Costs)

Next post: FDD Talk: How Much Does a DreamMaker Bath & Kitchen Franchise Make (Average Revenues and/or Profits)?