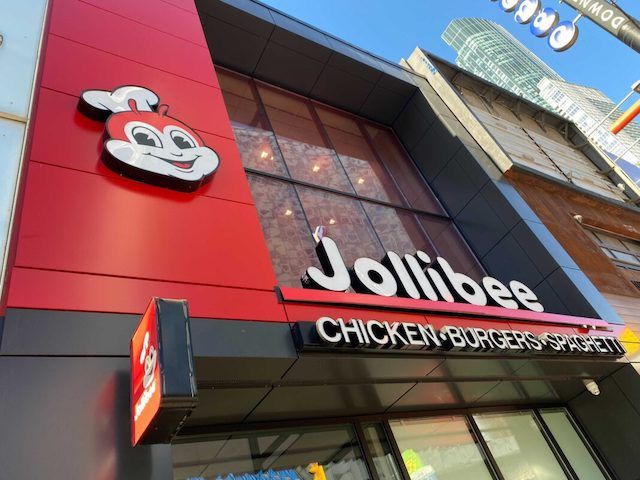 With around 1,300 stores around the world, across Asia, North America, and Europe, Jollibee is one of the rising stars of the fast food world. Founded in the Philippines in 1978, Jollibee succeeded by providing a Filipino alternative to growing American fast food chains, catering to the tastes of local people. Its founder, Tony Tan Caktiong, set up seven outlets in the first year, and the first franchised outlet a year later. From these beginnings came one of the biggest business successes in the country.

Not long after Jollibee’s founding, McDonald’s arrived in the Philippines, posing a major threat to the business. They were serving similar food to a similar customer base, but McDonald’s had more money and power. Jollibee could easily have been overwhelmed, but the smaller brand stood its ground, not only surviving the threat but continuing to grow, and in the process limiting McDonald’s expansion in the Philippines.

Jollibee started to expand internationally in the 1980s, reached America in the 1990s, and arrived in Europe within the past five years. It has seen particularly fast international expansion since 2016. International growth has long been one of Tan Caktiong’s aims, and it’s hard to argue with the company’s success: the Jollibee bee is increasingly ubiquitous.

Part of Jollibee’s success comes from its distinctive menu, which reflects centuries of interactions between Filipino culture and the wider world. Dishes familiar from blockbuster American chains, like burgers and fried chicken, are presented with Filipino flare, while Filipino specialties such as sweet-style spaghetti are refined and adapted for a global audience.

The menu shifts for local markets, with dishes to suit different cultures, though some, like the Chickenjoy fried chicken, are popular across its operations. While based on a Filipino favorite, the Chickenjoy fits with the cuisine of many other markets, and this has helped Jollibee make its mark.

From the start, the Jollibee franchise has been shaped by flexibility and a willingness to adapt. Tan Caktiong started the business in his early twenties by setting up two outlets of an existing ice cream franchise. Discovering that his customers wanted something different, he added hot meals and sandwiches to the menu, and these soon overtook the ice creams in popularity. Realizing that there was a different niche to be filled, Tan Caktiong founded a brand of his own, Jollibee.

Tan Caktiong, or Sir Tony as many employees call him, built the brand around his own particular tastes. A lover of food, he set out to make a “flavorful environment”, while retaining some of the simplicity of his Buddhist upbringing. He continues to shape the brand, studying the product mix of other fast food chains, the service style of airlines, and even the look of Disneyland for lessons in best practice and what customers want.

Jollibee’s ability to adapt is grounded in understanding local markets, including the tastes, traffic flows, and even ingredients of different areas. A balance between adaptation and consistency is important, and everything from product surveys to taste testing by the CEO goes into making sure that dishes are suitable for Jollibee’s restaurants.

Like many fast food chains, Jollibee owes a lot to its strong and distinctive branding. Even the spelling of its name was carefully chosen to create positive associations while being easy to trademark. Jollibee is distinctive in both its visuals and its menu, and its founder places an emphasis on the importance of intellectual property as a way to stand out.

It has even become a symbol of Filipino pride for some, a sign that the country can compete with the big business of America and Europe. Popular marketing campaigns and a TV show have set Jollibee buzzing in people’s brains. The mascot, a cute bee inspired by the popularity of Mickey Mouse, has become an internationally recognized icon.

The company has acted repeatedly and firmly to defend its brand against counterfeiting and IP infringement. It’s one of its strongest assets, a symbol of Tan Caktiong’s own pride.

A Brand Worth Working For

While it can be protective of its IP, Jollibee isn’t just a grasping corporate behemoth. It has a customer-first culture, a number of charitable works, and a working environment that has fostered a diverse set of employees. The CEO believes in persuading people rather than controlling them through commands, and this shapes the culture of the business. Even the bee logo represents the values of hard work and optimism, and Jollibee tries to live up to those values.

Global expansion is a big part of Jollibee’s agenda, and so far it seems to be working. Occasional setbacks have been countered by changes in strategy. Expansion in the US and Europe looks set to raise the company’s profile further as customers around the world seek a different fast food experience.

Jollibee has proven its value as both a company to work for and a brand with real appeal. The bright, cartoonish worker bee will surely reach more American streets very soon.

Previous post: How Much Is a Mosquito Squad Franchise? (Detailed Franchise Costs)

Next post: FDD Talk: How Much Does a The Camp Transformation Center Franchise Make (Average Revenues and/or Profits)?