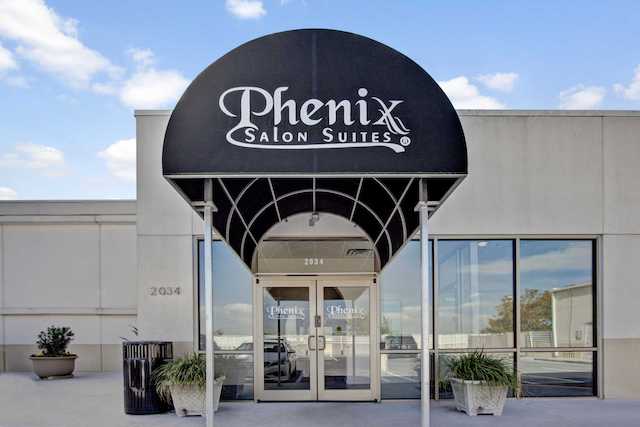 1.  In mid-March 2021, Phenix Salon Suites announced that it had opened its 300th salon location in Atlanta, Georgia. Franchisee Randa Shebly-Cobb joins Phenix with a strong background in executive leadership and entrepreneurship as an expert in various industries including consulting, real estate, direct sales and marketing, and mining. After opening her first company at the age of 22, she has never lost her passion for pursuing business ventures across the globe. Supporting and mentoring minority entrepreneurs in the lifestyle industry is close to Shebly-Cobb’s heart, making her personal mission align closely with that of Phenix Salon Suites.

2.  Randa Shebly-Cobb, owner of the brand’s 300th location in Atlanta, said, “After working with a number of diverse business concepts, I was looking for the perfect opportunity to engage my passion for the beauty and lifestyle industry. Once I came across Phenix Salon Suites’ business model and mission, I realized that I had found the right match. I feel lucky to join the company at this time of exponential growth. I relish in the opportunity to put my favorite acronym, TEAM: Together Everyone Achieves More, into practice in partnership with Phenix Salon Suites.”

3.  Adding to the exciting milestone of Shebly-Cobb’s opening, Phenix had opened 9 salons since the start of 2021. Welcoming locations in California, New Jersey, Texas, Tennessee, Idaho, and of course Georgia, the team was eager to continue this momentum throughout the year. As Phenix continues to expand at an impressive rate, the brand was named one of the Top 20 Franchises in America by Mirror Review and also ranked in the top 100 on Entrepreneur’s Fastest-Growing Franchises list.

4.  According to Brian Kelley, president and COO of Phenix Salon Suites, “These exciting milestones for Phenix speaks to the strength and momentum of the brand. Being named one of the Top 20 Franchises in America is testament to our passion and commitment in supporting our franchise base while attracting new and exciting individuals like Randa who are interested in how our model meets the current trends. Embodying all the characteristics of a Phenix franchisee and beyond, we are so excited to see Randa continue her entrepreneurship journey with our brand. We expect 2021 to be a very big year for the Phenix Salon Suites brand, starting with the major milestone of opening our 300th location in Atlanta owned and operated by a very bright and entrepreneurial partner in Randa Shebly-Cobb.”

6.  In mid-October 2021, Phenix Salon Suites revealed its strategic global expansion plan, starting with its first British location in Manchester, which opened in early October. Leading the charge for Phenix Salon Suites’ international growth is esteemed development group, Phenix LTD-UK, who signed an agreement to open 75 Phenix Salon Suites locations throughout the United Kingdom and the Republic of Ireland. Assisting the group with development and overseeing the milestone opening in Manchester is world-renowned hairdressing expert and Phenix’s European Operations Director John Gillespie.

7.  Gillespie said, “It’s such an exciting time to be a part of Phenix Salon Suites and we’re extremely buzzed about the opening of our first European salon location. Having been in the salon industry for more than 20 years, I’m familiar with the operations style that is crucial to the success of not only the franchisee, but also the lifestyle professionals. Phenix has definitely mastered the art of seamless operations which has been clear as we’ve established the Manchester location. Our UK team has a ton of developments in the pipeline and we’re eager to continue expanding across England.”

8.  Brian Kelley, president and COO of Phenix Salon Suites, added, “Phenix has had an eye on expansion overseas for a while now and we’re so excited to finally announce our entrance into international markets. We have a strong team behind our global growth with industry expert John Gillespie being a key player to streamline salon operations and Lesley Hawks leading the charge on development. This Manchester salon opening is just the beginning of our international expansion and we’re eager to see the UK development group pioneer our growth internationally. The United Kingdom is a stepping stone to the rest of Europe as the brand explores opportunities in Sweden, Spain, Germany, Switzerland and France.”

9.  Phenix Salon Suites’ push for international growth is complemented by founder Gina Rivera’s international expansion of Colours By Gina, her product line which has grown in popularity throughout Europe and South America in recent years. Designed by Rivera, Colours By Gina is a specially formulated, curated hair color line that allows for limitless intermixing and multi-functional results for hairstylists.

10.  Phenix Salon Suites was founded in 2007 by Gina Rivera in California. Rivera’s family had been in the salon industry since 1929 and she followed in their footsteps. For many years, Rivera ran her own salon out of a booth renter salon. While she built a strong reputation, Rivera realized that there were many stylists who rented booths that did not have the same kind of support she did. Rivera began advocating for better working conditions for lifestyle professionals who had the desire to operate their own salons but perhaps lacked the financial resources.

Part 4 – Occupancy Rates as of December 31, 2020 (of Certain Franchise Locations)

Next post: FDD Talk: How Much Does a Zoom Drain Franchise Make (Average Revenues and/or Profits)?