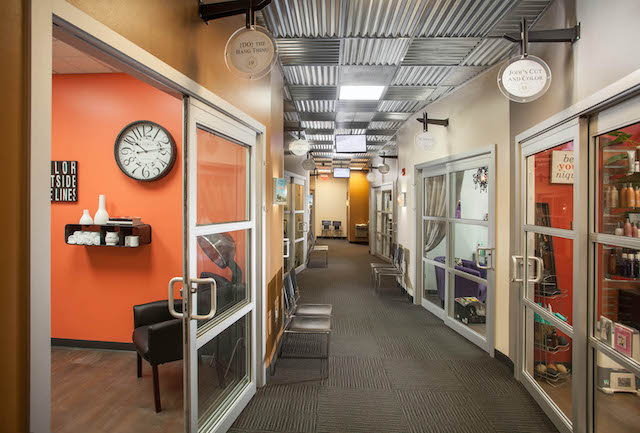 18 Things You Need to Know About the Sola Salons Franchise

Achieves Significant Franchise Development Growth in First Half of 2021

1.  In mid-July 2021, Sola Salons announced that at the close of the second quarter, it had opened 21 new locations and signed 15 franchise agreements to develop 60 new locations throughout the U.S. and Canada. The brand continued to grow its presence across North America in the first half of 2021, as it recently signed a multi-unit agreement for the Boston area and another in West Virginia. This growth came on the heels of a successful 2020 despite the pandemic, where Sola saw a 15 percent increase in stylist lead volume and reported that occupancy was at an all-time high.

2.  The company was recently recognized with numerous industry awards, including a placement on the Franchise Gator Top 100 2021 list. Additionally, the #SolaStrong campaign, created in order to support beauty professionals struggling during the closures of the pandemic, was awarded the Best Digital Campaign honor in Franchise Update Media’s Innovation Awards Marketing & Branding category. This annual award identifies and recognizes franchise brands that have created and implemented the most original and successful innovation strategies and tactics.

Announces Acquisition of Eight Franchised Locations and One Conversion

3.  In mid-September 2021, Sola Salons announced that it had successfully purchased eight units in the Sacramento market from a former Sola franchise owner. The units will now be integrated into the Sola home office’s corporate portfolio, which includes locations across Denver and the front range in Colorado and Orange County. In addition to these eight Sacramento locations, the Sola home office team is also welcoming a new Denver location that will be a conversion from a former Blue Lion Salon Studios.

4.  The eight Sacramento locations were formerly owned and operated by Sola Sacramento, a longtime franchise group led by Aaron Ramsey, Lara Ramsey, and Paul Kirby. This group of early franchise owners dedicated the past 15 years to growing Sola’s presence across the Sacramento market and developing strong and successful operations at each location.

6.  All nine new locations acquired by corporate will be managed by the corporate unit operational team under Jeremy Tebo, vice president of corporate operations at Sola Salons.

7.  Christina Russell, CEO of Sola Salons, said, “We are incredibly excited to welcome these locations into our corporate portfolio and are tremendously grateful to the Sola Sacramento team in particular for their dedication to the brand for more than 15 years. Their commitment to excellence has led to great performance by all of these locations and we look forward to continuing to build upon the success they established with these newly acquired units. With this acquisition, as well as the purchase and conversion of a competitor location in Denver, we look forward to continuing to add to our corporate owned unit portfolio and experience exciting growth alongside our network of Sola franchise owners.”

8.  Jordan Levine, COO of Sola Salons, added, “With our acquisition of multiple Blue Lion locations, we’re learning how to integrate competitor units into the Sola brand. We’ve welcomed the professionals into the Sola community, giving them immediate access to our proprietary technology and resources. We look forward to facilitating more successful acquisitions in our foreseeable future.”

9.  At the end of January 2022, Sola Salons announced its 600th location worldwide – marking the brand’s 17th location in Wisconsin. In addition to expanding the Sola franchise footprint, the brand is celebrating a year of achievements including 53 new locations, 72 signed franchise agreements, and reaching a milestone of 18,000 independent beauty professionals in 2021 throughout the U.S.

10.  Christina Russell, CEO of Sola Salons, said, “It’s been exciting to watch Sola grow at such a rapid pace throughout 2021. Reaching 600 locations nationwide is a landmark milestone for the company. Sola’s accelerated growth is the result of an innovative business model combined with a strong spirit of entrepreneurship and independence in the professional beauty industry. We continue to be motivated by the successes of our franchisees and are eager to continue this momentum in 2022.”

11.  The brand’s growth throughout North America in 2021 culminated with its 600th salon located in Janesville, Wisconsin. Behind the milestone opening is first-time franchise owner Alicia Modjeska, a former healthcare executive and U.S. Veteran. Modjeska was so impressed with the Sola business model that she came out of retirement to open her first location. Modjeska, who signed an agreement to open three Sola locations, is already searching for real estate to open her second studio.

12.  Modjeska said, “I’m thrilled to join the Sola community while spearheading the launch of a new territory for the brand, which will give job opportunities to beauty professionals in Janesville and surrounding markets. With an extensive background in corporate America, this journey with Sola is giving me the opportunity to have freedom and flexibility as a business owner while giving back to my community, and ultimately providing a successful growing business that I can one day pass down to my daughters.”

13.  Sola Salons (formerly Sola Salon Studios) was founded in 2004 by Stratton Smith and Matt Briger in Denver, Colorado. Smith and Briger wanted to create a community where independent beauty professionals could build a career they would be proud of.

14.  While Smith and Briger were first developing the concept for Sola Salons, they consulted with Denver-based stylist Kim Bennett to learn more about what was important to her in creating her dream salon. Bennett was impressed by Smith and Briger’s commitment to helping stylists achieve their dreams and she became the first Sola Salons franchisee in 2005. The company continued to grow over the next decade.

15.  To help franchisees, Sola Salons released tools and resources to make running their businesses easier. In 2016, Sola launched Sola Pro, an exclusive app, to host industry deals, special offers, and a variety of educational resources to bridge the gap between the professional beauty industry and the Sola community.

17.  Today, Sola Salons has locations across the United States, Canada, and Brazil.

Previous post: FDD Talk: How Much Does a Ziggi's Coffee Franchise Make (Average Revenues and/or Profits)?