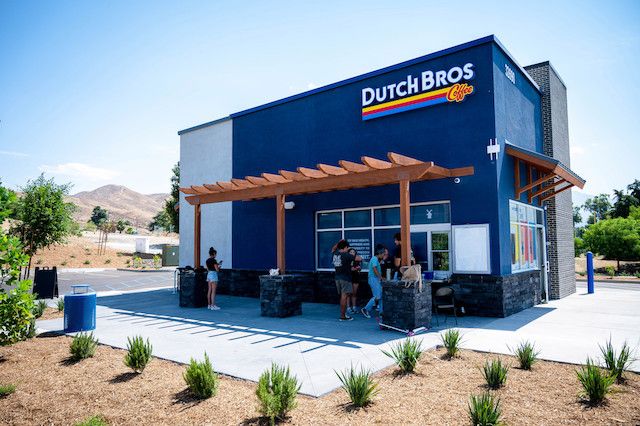 SuperFranchise covers the franchises that everyone’s talking about, the businesses with an extra edge of swagger, style, or infamy. The staggering investments, the dazzling brands, the social media superstars, the companies everyone in franchising should know.

With its casually dressed executives and its labelling of staff as “broistas”, Dutch Bros. Coffee looks like a satire on a modern coffee shop. But when a recent IPO made its co-founder into a billionaire, it became clear that this was more than a novelty act. It embodies what many people are looking for in a modern business: relaxed, value-led, and hugely profitable.

When a company’s co-founder wears the t-shirt of an anti-capitalist band onto the floor of the New York Stock Exchange, you know that you’re not dealing with your average business. But then, there’s nothing average about Travis Boersma or his company. Becoming a billionaire while raging against the machine is only the tip of the iceberg.

Dutch Bros. Coffee started out in 1992 as a single coffee cart in Grants Pass, Oregon, run by Dane and Travis Boersma. With their family’s dairy farm struggling, the brothers were looking for another way to make money. $12,000 bought them the resources to start their business, most importantly a cart and an espresso machine, and they were soon making $200 a day selling drinks.

After years of hard work on a farm, making coffee and chatting with customers while serving coffee felt more like fun than work. A relaxed attitude and a growing bond with the people around them pushed the business to success, and they’ve stuck with that style ever since.

Dutch Bros. Coffee hires and promotes outgoing optimists to work in its stores, and encourages them to take care of their customers. Viral footage from 2016 of staff reaching out to a bereaved customer is only the most famous example. The company is full of stories about staff providing free drinks and support to customers in need.

It’s an approach that has brought the predictable brand loyalty and positive headlines, but that has also created loyalty among the staff. People are genuinely excited to work for the company. It helps that they treat staff well, offering an additional $3 per hour pay during the pandemic and financially supporting some employees in establishing their own franchises.

The company has also made real its commitment to good causes. Since Dane’s death from amyotrophic lateral sclerosis (ALS) they’ve celebrated a day called “Drink One for Dane” each year, raising funds for the Muscular Dystrophy Association. The company has put regular effort into supporting other principles and causes.

While the company’s culture is a big part of its appeal for both customers and staff, it hasn’t been lax in its approach to its products. Dutch Bros. Coffee has come a long way from pouring espressos from the back of a cart. Their classics range alone offers seven different sorts of coffee, flavored with everything from coconut to Irish cream. There are cold brews, teas, Americanos, sodas, smoothies, and the company’s own range of energy drinks.

This taste for novelty can be off-putting to more old-fashioned coffee drinkers, or those who enjoy the nuance of different beans and getting the grind just right. But for the sort of customers that Dutch Bros. has fostered, people who like their service casual and chatty, it’s a good fit. And in an industry with such stiff competition, variety is a good way to bring customers in.

The bro-tastic culture that could so easily have turned toxic at another company has become a real strength, forming a company that’s relaxed, compassionate, and loyal to its core principles.

There are now over 530 Dutch Bros. Coffee shops, over 200 of them franchises. These are resilient operations that usually succeed wherever they spring up: only 3% of units closed between 2010 and 2015.

With average gross revenues of $1.5 million per unit, they’re profitable too. Even in 2020, at the height of the pandemic, when fewer people were out buying coffee, the company saw 7.7% sales growth. It opened 98 new stores in 2021, making the most of the recovering economy. It’s gained positive attention from investors, raking in hundreds of millions on its IPO and drawing optimistic assessments from analysts. The company is very appealing not just to investors but to would-be franchisees.

But there’s a catch: Dutch Bros. only offers franchises to people already associated with the business. It’s part of the company’s wider culture, with its emphasis on finding the right people to build the right atmosphere. To ensure the quality of the people running their outlets, they only offer franchises to people who have worked for several years within the company, showing that they understand and will continue its culture. There are also reports that the company is tightening its control, with most of its new stores company-owned rather than franchises.

If you’re positive and outgoing, then Dutch Bros. could be a great fit for you. But unless you’re willing to put in the years as a broista first, it’s not the place to go if you want to start a franchise.

Previous post: FDD Talk: How Much Does a Soccer Shots Franchise Make (Average Revenues and/or Profits)?