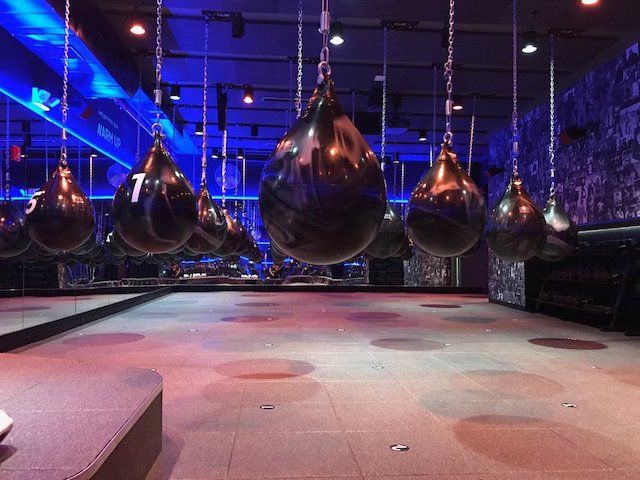 16 Things You Need to Know About the Rumble Franchise

1.  In late March 2021, Xponential Fitness announced that it has acquired Rumble, the latest brand added to its portfolio, further highlighting the company’s position as the largest curator of boutique fitness brands in the world. Rumble, a boutique boxing concept, joins the other eight brands under the Xponential Fitness umbrella including Pure Barre, Club Pilates, CycleBar, YogaSix, StretchLab, Row House, AKT, and STRIDE.

2.  Founded in 2017, Rumble delivers 45-minute, 10-round, full-body strength and conditioning workouts crafted around specially designed water-filled, teardrop-style boxing bags. The company was started in the heart of Chelsea in New York City and has since expanded into Los Angeles, Washington, D.C., Philadelphia, Palo Alto, and San Francisco, with a Chicago location coming soon.

3.  In February 2021, Rumble launched Rumble TV, a live and on-demand workout platform, to bring the Rumble experience home with an extensive collection of boxing, HIIT, strength, and running workouts.

5.  Anthony Geisler, CEO of Xponential Fitness, said, “With its premium, world-class boxing experience, cutting-edge virtual workout platform, and celebrity reach, Rumble is a fantastic fit for our robust lineup of industry leaders across boutique fitness. By adding Rumble to the Xponential portfolio, we’re opening up another core modality for our members to help them reach their health and fitness goals within our family of brands, as well as creating opportunity for entrepreneurs to bring this engaging workout to their market.”

6.  Andy Stenzler, co-founder of Rumble, said, “We are thrilled to announce our deal with Xponential. They are certainly the premier franchisor in our industry and thus the perfect partner to bring the Rumble experience across the globe.”

7.  Ashley Camerini, CEO of Rumble, added, “Our loyal Rumble customers will love being part of the amazing family of Xponential brands that will cater to all of their fitness needs. We are looking forward to seeing Rumble grow with such an incredible industry leader.”

9.  Rumble and Box X have also teamed up with former F45 franchise owners and well-known entertainment industry duo, The Stafford Brothers, to promote Rumble in Australia and open their own Rumble studios.

10.  John Kersh, chief international development officer for Xponential Fitness, said, “We are excited to secure another international agreement for Xponential Fitness in Australia with the Boutique Fitness Studios team. Australia is proving to be a major emerging market for boutique fitness, so we know Rumble will be a strong addition to the Xponential brands, CycleBar, Club Pilates and StretchLab, already sparking excitement in the market.”

11. Matt Gordin, CEO of Boutique Fitness Studios Pty. Ltd., is very confident in Rumble. “We are certain that Australians will embrace the results-oriented workout and immersive customer experience at Rumble studios,” said Gordin.

12.  Rumble was founded in 2016 by Noah Neiman, Eugene Remm, Andy Stenzler, and Anthony DiMarco in New York City. The four entrepreneurs, who come from very different backgrounds, saw an opening niche for a trendy boxing fitness studio brand. While there have been boxing gyms in New York for years, Rumble’s clean aesthetic that’s mixed with street art appeals to a different audience than traditional boxing gyms.

Part 1 – Average, Median, and Other Gross Sales Generated Amongst 2019 Studios (With Signature Footprint) Over the 2019 Calendar Year

Part 2 – Average, Median, and Other Gross Sales Generated Amongst Each Defined Subset of Disclosed Studios With Signature Footprint Over Each of the First 2 Calendar Months, Respectively, of the 2020 Calendar Year

Previous post: Lesson #60: When Should You Hire a Franchise Consultant?