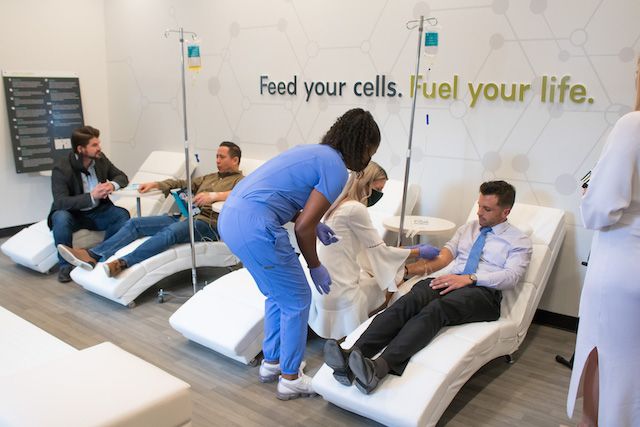 In this exclusive Q&A, we get to learn about the evolution of a leading IV vitamin therapy franchise, The DRIPBaR. Ben Crosbie, CEO of The DRIPBaR, will share some details about what The DRIPBaR is and how the brand has been growing.

Franchise Chatter (FC): Welcome, Ben. For those who aren’t familiar, can you please share a bit of background on The DRIPBaR?

Ben Crosbie (BC): People are starting to recognize the power of IV therapies to maintain their best health, or to fight cancer, heart disease and other illnesses. They are seeking out care either to complement or replace conventional treatment options. Client driven, cash based intravenous treatments are a durable change in the healthcare landscape that will only grow in the future and The DRIPBaR will be the leading brand in that space to capture this demand. The quality and range of our offerings, and the consistent excellence of our services, will distinguish us as the market grows.

Healthcare is no longer a passive activity where people wait for an illness to strike and then react to it. More than ever people want to be in control of their own health, they want to be proactive, and they want non-drug therapies to support their best health. They want what The DRIPBaR has to offer and we are excited to offer our franchise opportunity.

FC: Can you share with us the backstory about what brought you to your specific career path?

BC: I have been an entrepreneur for my entire career. I went to college for athletic training and sports nutrition because I knew I wanted to be in the health and fitness industry. After being a personal trainer for a bit, I opened up my own line of health clubs. Eventually I sold the clubs and got into consulting work. With my consulting, I helped to develop a few franchise systems. This was my first entry into the franchising world. In 2014, I secured the global rights to a brand called Tapout Fitness, which I sold in 11 countries and had great sales. After I exited that brand, I went into franchise development.

During the course of my professional career, I discovered The DRIPBaR. I was going there to get the right vitamins and energy to be able to work longer, harder hours. It was my “secret sauce”. I began to talk with the previous CEO and founder about franchising the brand and she said yes; and this is where the opportunity for me at The DRIPBaR really started. In September of 2019, we launched The DRIPBaR franchise system.


FC: What sets The DRIPBaR apart from other concepts in the IV Therapy space?

BC: There are a number of ways The DRIPBaR is different. Our competitors are pre-mixing bags of fluid and vitamins. Nobody is mixing inside a sterile hood like THE DRIPBaR. The possibility of cross-contamination and infection compared to the way we mix our drips is evident. A nurse is always on-site to oversee what is going on at The DRIPBaR.

I think what makes our franchise stand out the most is our concept and the services we offer. The main principle of The DRIPBaR is to enhance our client’s cellular life (CellVie) for improved health and vitality. We are focused on improving the quality of life for everyone: people who are already healthy and want to stay that way and people who need to reclaim their health.

In addition to the traditional services of infusion centers, we also offer alternative therapies for cancer, have protocols for diabetics, help people with high blood pressure, and test for and remove toxic heavy metals from the body.

FC: When did you start franchising? What were some initial challenges you experienced?

BC: We started franchising in late 2019, and some of the challenges we experienced included educating the public on a relatively new health support option and creating a franchise system that didn’t currently exist. Our clients take a more preventative approach to their healthcare. They are looking for ways to enhance their health and immune system. The notion of IV vitamin infusions was new to a lot of our clientele. We needed to create marketing that allowed them to understand what we were offering and how it may benefit them.

The franchise system was a totally different ballgame; franchising in the medical field can be tricky with lots of rules and regulations and each state is different. We are the first IV vitamin infusion franchise to have all our locations USP 797 compliant. This means all of our centers follow the highest standard for pharmacy compounding. This wasn’t an easy task, but worth the extra effort for our clients’ safety and is one of the many things that separates us from our competition.

FC: What processes and procedures have you put in place to ensure consistency across the brand?

BC: We use a detailed franchise software system that keeps our franchisees on track and within the scope of our business. We make it clear what our brand is and how they need to uphold it. They have to upload documents and pictures along the opening process. We have an opening team that arrives at their center the week before they open to ensure brand consistency.

FC: How did the pandemic affect your brand?

BC: We were thrilled to be allowed to stay open during the pandemic, and consider ourselves very fortunate that we got to do this. Being able to continue to provide services to our clients during a time when people were becoming so concerned about their health speaks to how much our concept resonates with the public.

Times are changing … IV vitamin therapy is no longer a luxury, it is a lifestyle that we are making accessible to everyone.

FC: What is next for The DRIPBaR?

BC: We hope to open as many as 50 locations in 2022 throughout various states within the country including Hawaii, New York, Indiana, Georgia, Arizona, Pennsylvania, and Florida.

FC: What is the typical investment to open a The DRIPBaR franchise?

FC: How can people learn more about The DRIPBaR if they’re interested in franchising?

BC: For more information about the franchise opportunity, visit www.thedripbar.com/own-a-dripbar.