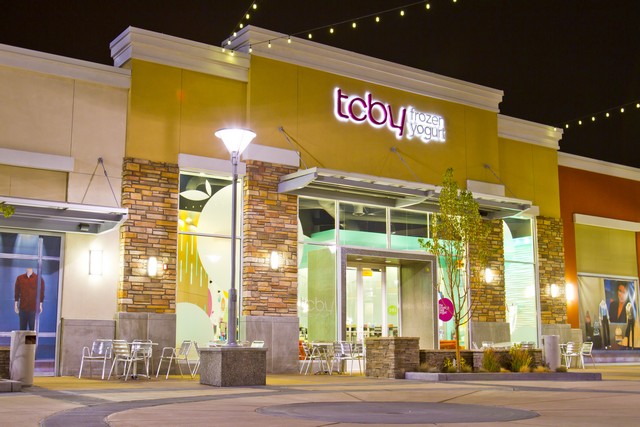 21 Things You Need to Know About the TCBY Franchise

Celebrates 40th Anniversary with Continued Growth and Expansion Across the U.S.

1.  In early June 2021, TCBY celebrated its 40th anniversary with the brand continuing to expand rapidly and thrive as communities reopen amid the rollout of the COVID-19 vaccine. With 12 new U.S. locations opened in the past year and six additional locations set to open in the coming months, TCBY leads the frozen yogurt market in nutrition, taste, and new product innovation.

2.  Last summer, TCBY opened a new drive-thru in St. Augustine, Florida, a new self-serve store in Bayonne, New Jersey, focused on catering with a late-night walk-up window, and a counter-service store in Navarre, Florida, that will appeal strongly to tourists.

3.  To celebrate its 40th anniversary, TCBY announced a variety of sweet summer deals, including a magical, color-changing bowl for $1 that was available across all locations nationally while supplies lasted.

4.  Nelson Tejada, chief executive officer of Famous Brands International, said, “This anniversary is a significant milestone for TCBY, and the success of the brand has only been possible because of our loyal fans, dedicated franchisees and team. We are grateful for continued customer support which has helped us expand to new locations in the past year and we are looking forward to bringing the brand to new locations and connecting with new customers.”


5.  At the end of July 2021, TCBY announced that it was celebrating its 40th anniversary on Tuesday, August 3 by offering fans a Buy One, Get One for only 40 cents promotion from 3 to 7 p.m. local time at all TCBY locations nationwide. As part of anniversary specials throughout the summer, TCBY also featured Birthday Cake Batter and Strawberry Birthday Shortcake soft-serve flavors, as well as a delicious Birthday Cake hand-scooped flavor.

6.  According to Nelson Tejada, chief executive officer of Famous Brands International, “We are thrilled to be celebrating the brand’s 40th anniversary, and this special offer is our way of thanking everyone for their support over the last four decades. We look forward to welcoming our fans and new guests to TCBY this summer to enjoy our frozen treats as they spend time with their loved ones.”

7.  As the trailblazer of the froyo industry, TCBY was founded in 1981 in Little Rock, Arkansas, where it brought customers a delicious, healthier-for-you frozen dessert concept that started a dessert revolution. Today, TCBY is the only dual soft-serve and hand-scooped frozen yogurt franchise.

8.  With more than 250 locations globally (at the time of the announcement), the brand leads the market in nutrition, taste, product quality, and customer satisfaction among a growing fan base. In addition to an extensive menu of low-fat, non-fat, and no-sugar-added flavors, TCBY’s Super Froyo offerings boast three or more grams of fiber, four or more grams of protein, seven types of live and active cultures, and are a good source of calcium and vitamin D.

9.  In mid-August 2021, as TCBY celebrated its 40th birthday, the brand said that it would be taking new steps to remain relevant, from designing smaller kiosks for traditional locations to working on its first drive-thru window in order to appease on-the-go customers.

10.  Betsy Schmandt, president of franchising for TCBY and sister cookie company Mrs. Fields, said it isn’t that company leaders are worried about losing their edge. Company-led studies have found the TCBY brand awareness remains 50% higher than its competitors. But a significant drop in the number of its locations in the past 20 years – from nearly 1,800 in the early 2000s to roughly 250 in and out of the United States today – has cut into the company’s revenue, as it has with other restaurants facing what seems to be their middle age.

11.  And like practically every concept not built around drive-ins, its revenue fell in 2020 – a percentage that Schmandt declined to specify but that Nation’s Restaurant News pegged at 25%. But the same company that’s moved 50% of its locations over the past decade to a self-serve model that’s dominated the frozen-yogurt sector, responded once again to consumer demand even as it was dealing with the industry-wide loss of customers. It added contracts with third-party delivery platforms and boosted sales through the format.

12.  TCBY also developed a new 100-square-foot kiosk that can hold 12 three-gallon bins of frozen yogurt along with toppings, beverages, and specialty desserts and began deploying them through franchisees to malls and soon to airports. The smaller-format stations allow franchisees with more limited capital to buy into the concept, and it is designed to help landlords in spaces that lost multiple tenants during the pandemic to fill back again as customers return, Schmandt said.

13.  And while it’s deploying that innovation, the chain also is preparing to open its first drive-thru window on a store in St. Augustine, Florida, in the next year. This is once again doubling down on the call for convenience, and company officials believe it could set the tone for a new store prototype.

14.  Meanwhile, TCBY is back in growth mode. After opening just eight new locations in the halcyon pre-pandemic days of 2019, it opened 12 in 2020 and had 28 stores that either debuted in 2021, were under construction, or were under contract for development. “I think that Covid was really the kick to make us move a little faster on some of those aspects,” Schmandt said of the new designs and service models. “What most brands saw was an acceleration of customer trends around convenience.”

15.  Some of those trends were underway even before the pandemic. A franchisee in Bayonne, New Jersey – located southwest of New York City – requested to open a walk-up window, transforming a self-service location into one manned by a single worker to serve late-night crowds. Schmandt said that while such efforts likely would be limited to areas with high pedestrian traffic, the chain will consider expanding that model in the future.

16.  Additionally, TCBY continues in its effort to co-locate TCBY with sister cookie store Mrs. Fields, a co-branding that now is in 36 locations. Mall-located Mrs. Fields stores have recorded double-digit percentage year-to-date revenue growth versus 2019, and Schmandt said that company officials are confident that customers will return to malls in the coming years.

17.  In the past six months, TCBY has signed several new franchise agreements that will push growth even further, Schmandt added. So, while the chain may be showing some gray hairs, it’s still got a spry attitude and plans to try new ways to reach a younger, yogurt-seeking crowd. Schmandt added, “ I think, in general, being a 40-year-old brand is a blessing. Our customers love TCBY. Our business is back to 2019 levels…I feel very confident in where we’re going.”

19.  The first TCBY was a success and Hickingbotham brought in family members to open additional locations. Franchising started in 1982 and by the end of the 1980s, TCBY had grown to over 1,582 stores. Over the next few decades, TCBY continued to grow around the United States and expanded internationally.

20.  In 2000, TCBY was acquired by Mrs. Fields and the new parent company was dubbed Mrs. Fields Famous Brands. Despite the early success, by the early 2010s, TCBY’s sales had declined and several stores were closed. However, TCBY is still one of the largest frozen yogurt brands in the U.S.

Previous post: Lesson #35: Choosing a Franchise for the Income You Need