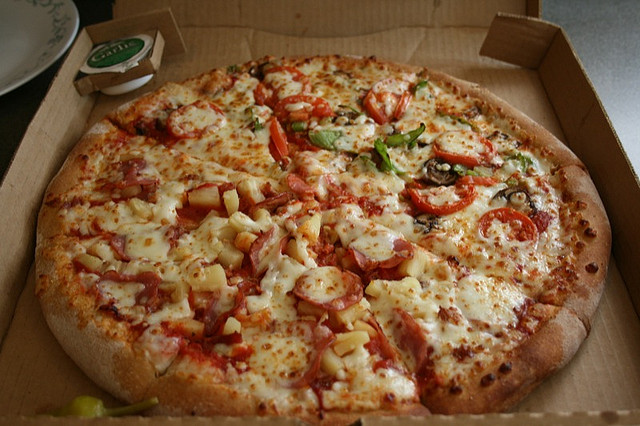 17 Things You Need to Know About the Papa Johns Franchise

1.  In mid-November 2021, Papa Johns unveiled a fresh logo (the apostrophe is gone) and visual brand identity, as well as a customer-centric restaurant design that offers a streamlined, flexible environment for operators to capitalize on a changing restaurant world.

2.  Kate Carpenter, senior director, advertising and design for Papa Johns, said, “Better has always been at the core of what we do at Papa Johns. In this next chapter, we are going to continue that focus on being ‘Hungry for Better.’ And that means challenging where we are and evolving to meet the needs of today and tomorrow.”

3.  The new brand identity centers on Papa Johns’ premium-ingredient platform. It’s the DNA CEO Rob Lynch zeroed in on when he left Arby’s for the position. As he told QSR earlier in the year, “It was in that meeting, in that first week, where we made a strategic decision that we were going to get back to what had originally made the brand great.” Things like garlic dipping sauce and the pepperoncinis guests expect in each box, as well as Papa Johns’ six-ingredient, never-frozen original pizza dough.

4.  The brand went as far in this effort as redesigning its typography to create a custom font inspired by the way dough moves and stretches when employees make pizza. The updated color palette includes hues like “Tangy tomato,” “Fresh basil,” “Fluffy dough,” which is off-white, “Punchy garlic,” a light purple, and “Pickled pepperoncini,” a bright, yellow-green. Papa Johns created “hand-drawn happiness” illustrations to reflect the company’s hand-crafted nature that it says will also offer information to guests.

5.  The store design pops all of these colors and imagery, including “photos celebrating the best pizza moments – the ones shared with others,” and what it takes for employees to craft orders. Expect massive shots of ingredients, like mushrooms and pepperoncinis. “The interior design features elements intended to indulge the senses and provide visual cues that will reinforce those crafted premium quality products Papa Johns is known for. We wanted a fresh take on premium within the [quick-service restaurant] category,” Carpenter said. “So where better to draw that inspiration than our premium ingredients?”

6.  Operationally, there’s a clear focus on purchasing and pickup experiences anchored by an open floorplan. Inside, Papa Johns added a pickup counter, which now boasts a self-service option for guests to grab their orders without waiting in line. Some also feature “Drive-Up Pick Up,” or essentially curbside pickup spaces. Others tout pickup windows as a drive-thru feature for consumers to order ahead and collect food out the window.

7.  In the back, Papa Johns designed modular stations for employees to use the same space for different products at different times. For instance, as they cut pizzas and place the pepperoncini pepper and Papa Johns garlic sauce cup inside each box, they will be better equipped with a special space to add these final touches. Alongside modular make-lines, Papa Johns implemented cut-table improvements to enable higher throughput at peak times – a reflection, Carpenter says, of the fact demand has surged across the fleet.

8.  As far as timing goes, the new design, logo, and visual identity will unfold in a “phased approach,” Carpenter said. The new logo officially launched in mid-November. The updated identity and store design will follow. “Given the scope of the changes, we’re intentionally taking a methodical approach to this implementation,” she said. “The duration of the rollout is going to cover an extended period of time, and we’ve actually taken that into consideration in designing the elements of this brand evolution to make sure that we considered a period of transition or overlap.”

9.  In mid-October 2021, Papa Johns announced the promotion of Max Wetzel to EVP, chief commercial officer. Wetzel joined Papa Johns in November 2019 as its chief commercial and marketing officer, overseeing marketing, menu innovation, customer experience, and a transformation office. In his new, expanded role, he will add North America restaurant operations, technology, and insights to his responsibilities.

10.  Rob Lynch, president and CEO of Papa Johns, said, “Over the past two years, Papa John’s has fully transformed itself from a turnaround story to an innovation-driven growth business with enormous development whitespace. Over the same period, the pandemic also accelerated changes in consumer behavior and expectations that were taking hold prior to 2020 – online ordering, adoption of delivery aggregators, robust loyalty programs and one-to-one marketing – which have contributed to Papa Johns’ consistent outperformance, thanks to the efforts of Max and his team.”

11.  “More tightly integrating our commercial and marketing functions with our technology team as well as our restaurant operations, who play the critical role of delivering for our customers every day, allows us to better realize our long-term growth opportunity. In addition, we’ll be better positioned to take on bold, transformative projects that are enabled by our technology, growing first-party data capabilities and a company-wide innovation culture,” said Lynch.

12.  Since joining Papa Johns almost two years ago, Wetzel has led Papa Johns’ successful efforts to strengthen perception of its premium, differentiated brand position in the pizza category, including launching successful menu innovations like Epic Stuffed Crust and Papadias, creating impactful marketing campaigns like Shaq-a-roni, and growing the popular Papa Rewards loyalty program to more than 20 million members. Most importantly, he has helped bring a data-driven approach to everything the company does, leading to smarter business decisions that have delivered positive results for the entire Papa Johns system.

13. Papa Johns (formerly Papa John’s) was founded in 1984 by “Papa” John Schnatter in Jeffersonville, Indiana. Schnatter began selling pizzas out of a broom closet in the back of his father’s tavern. The tavern’s customers enjoyed Schnatter’s pizza and within a year, Schnatter had made enough money to move into the space next to his father’s tavern. That same year, Schnatter developed Papa Johns’ dipping sauces, which are still a signature feature of the brand today.

14.  Schnatter began franchising Papa Johns in 1986 and over the next few years, the brand grew quickly. By the mid-1990s, the chain had grown to more than 500 locations. Papa Johns’ growth continued over the next few decades. In 2001, Papa Johns became the first pizza chain to offer online ordering. In addition to growing around the United States, Papa Johns expanded internationally.

15.  Until 2017, Schnatter continued to own, operate, and act as the face of Papa Johns until he was asked to step down following controversial behavior that reflected negatively on the brand. Since Schnatter’s exit, Papa Johns has worked hard to rebuild the brand’s reputation and distance itself from Schnatter.

16.  In 2021, Papa Johns announced it was rebranding its logo (by removing the apostrophe and simplifying the design) and store locations. Today, there are Papa Johns locations all around the world.

Previous post: Lesson #31: Using Your Strengths and Weaknesses to Pick a Franchise

Next post: 18 Substantial Fees Every Fetch! Pet Care Franchisee Needs to Know About