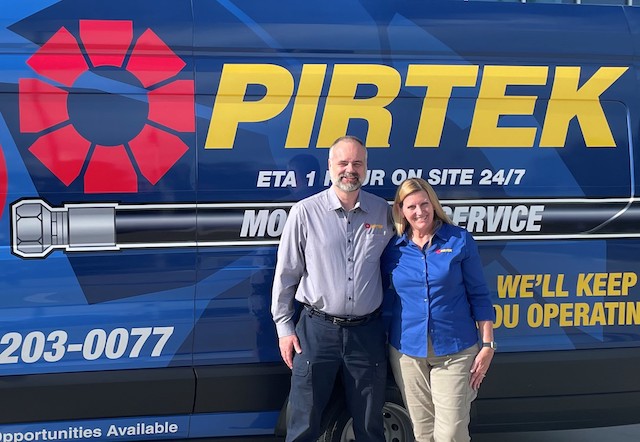 To fly, fight and win is the motto those who serve in the United States Air Forces live by during their time in battle – and it’s something PIRTEK USA franchise owner Ed Cushing has done during his time with the company over the past 20 years.

Ed served as a hydraulic worker in the military for 11 years and when he retired, was in need of a job. That’s when he found PIRTEK USA, a global on-site and retail hydraulic and industrial hose service provider, that hired him on as an entry-level employee in 2001. Since then, he’s worked his way up to operations manager, general manager and now has started a brand-new venture: owning his own PIRTEK franchise business in Columbus, Ohio.

Franchise Chatter (FC): What drew you to PIRTEK USA after leaving the Air Force?

Ed Cushing (EC): I found a posting for a mobile sales & service technician (MSST) on a local job board. After reading about PIRTEK USA, I figured this would be a good fit for me as it lined up with what my Air Force career experience was and quite frankly, I needed a job. I was comfortable starting my career with PIRTEK USA because it just seemed to fit. I also really liked the fact that I would be working on all kinds of different machinery, building relationships and not stuck in a plant doing the same thing over and over again.

FC: How did your time in the Air Force help you at PIRTEK USA?

EC: I feel that the Air Force really set me up for my career with PIRTEK USA. The Air Force instills lifelong strengths such as strong work ethic, professionalism, teamwork, and attention to detail. These are all traits that align and fit perfectly with the PIRTEK system and are needed to succeed.

FC: What separated you from other employees in the past for promotions?

EC: I don’t think any of my promotions came easily because there was a lot of hard work and long hours to get there. I always tried to be the best that I could be and I would embed myself in anything that I could learn to make me stronger. I feel like this made me an asset. I made sure that my supervisor knew that I was dependable and honest. I was organized, good at multi-tasking and could handle a heavy workload. I felt like the more I had, the better I worked.

FC: Tell us about some of your experiences as a new franchise owner.

FC: How are you going to separate your new PIRTEK location from other competitors in the area?

EC: One thing we all know, downtime is very costly. PIRTEK does a wide variety of things to eliminate our customers’ downtime and one of those things is our 1-hour ETA on-site campaign. It seems basic but it’s very important and in my short time in business, customers have already been impressed with this very simple thing. Another simple thing is to just listen. Listening will afford you the opportunity to solve their problems and not just provide another band aid fix.

EC: The Columbus metro area is the top growing city in the Midwest with just over 12% growth in ten years. It seems to make sense that a PIRTEK franchise would do well in the Columbus area. PIRTEK provides a unique service for all types of industries such as construction, manufacturing, rental equipment, fleet management and so many more. If there is a hydraulic hose on it, we’ll fix it.

FC: What pushed you to open your own location in Columbus?

FC: What excites you about being a franchise owner?

EC: I was doing a job on a Bobcat skid steer on a gentleman’s personal property. As I’m repairing his machine, I hear him calling his friends telling them that they have to call PIRTEK in the future for hose service. He says, “I called them, and within an hour he already has the hose off – the other place told me they could be here in three weeks.” All I could do was smile and thank him. This type of interaction makes my day.

FC: What advice do you have for those looking to open their own PIRTEK location?

EC: My advice is to follow the system and don’t try to reinvent the wheel per se. Use the support of PIRTEK USA and the other franchise owners. You must be committed and involved every day. Stay involved with your customers and your employees. Get out there and visit with your customers and help your technicians on tough jobs, it makes a difference.

FC: What message do you want readers to know?

EC: Well, just that we are committed to providing a top-notch service with a quality product. We are available 24/7, 365 days a year to keep your machines operating. Let’s get to work!

FC: What are your future plans for your PIRTEK franchise?

EC: My goal is to grow the existing location and eventually expand to open a second PIRTEK franchise in the Columbus area.