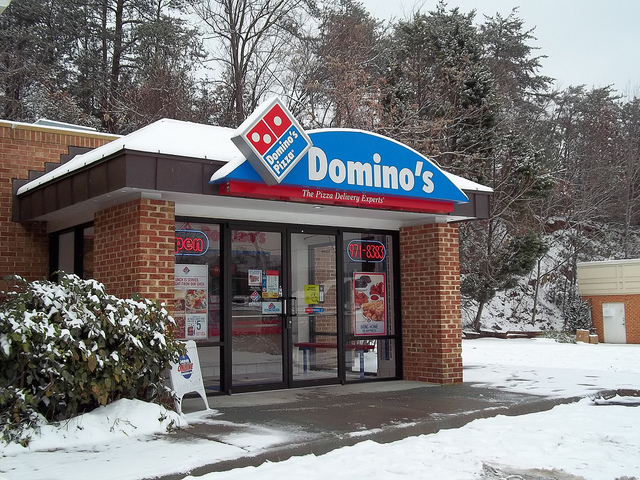 Domino’s Pizza might be best known for its pizza, but within the industry, it’s also known and respected as a technological innovator. Over the past decade, it’s returned from the brink of the financial abyss to become perhaps the most dominant player in takeaway pizza through its use of technology.

The company was one of the first to introduce its own ordering app, has taken pride in keeping the order process as slick as possible, and it’s now experimenting with driverless delivery and electric bikes. With 60% of all digital orders for pizza coming through mobile apps, and third-party delivery firms keeping up to 30% of a bill, the company’s innovations have helped Domino’s to secure both its popularity and its profitability.


How much is a Domino’s Pizza franchise?

How much is the Domino’s Pizza franchise fee?

Once the store is up and running, there are royalty fees of 5.5% of sales and an advertising fund fee of 4% of sales. You may also have to be part of local or regional advertising cooperatives, taking a further 1-4% of sales (Item 6, FDD 2021). All of these payments are taken weekly and are based on what the company labels as “royalty sales”, which exclude certain coupons and discounts.

How much does a Domino’s Pizza franchise make?

Average sales for a Domino’s store are $1,313,728 per year, and the average EBITDA (Earnings Before Interest, Taxes, Depreciation, and Amortization) is $203,628. This means that you are left with an operating income of just over $200,000.


It’s worth remembering that this is just an average, and that you should try to get a better understanding of the specifics before investing in any restaurant. Comparing metrics with other restaurants in the same category can give you an idea of how much you could make with a local Domino’s and whether this is likely to be one of the more profitable franchises in your area. Franchise Chatter subscribers have access to a range of tools for such comparisons, as well as a detailed review to give you more information.

How do you franchise a Domino’s Pizza?

Applying to run a Domino’s franchise starts with an inquiry stage, where you complete a form showing your interest in the company. They’ll assess this initial application and provide you with more information. If they like the look of you as a franchisee, they’ll then send you an application document pack in preparation for a telephone interview.

If you’re successful in the phone interview, you’ll be asked to complete a draft business plan before a further face-to-face meeting. This is a chance for them to go over your plan with you, help sort out the details, and check that you can do the job. If you pass this stage, you’ll be given more store-specific information and invited for orientation.

Having passed the application, you start the franchising process, including finalizing a complete business plan and agreeing on a franchise area. Once the franchise agreement is in place, you’ll receive your training, set up your store, and be ready to go.


Is the Domino’s Pizza franchise for you?

Domino’s is one of the most successful pizza franchises in the world, with a taste for technology that has driven it to great success even in difficult times. For example, its sales increased 16% during the early days of the coronavirus pandemic. With its strong brand identity and its emphasis on technological innovation, it’s a solid choice for someone who wants to run a restaurant with an established rather than a growing brand, and the average potential earnings are good.

There are plenty of other restaurant options, especially when it comes to pizza, and it’s worth checking them out before you make a decision. To learn more about the possibilities, subscribe to Franchise Chatter to access our comparison tools and in depth reviews.