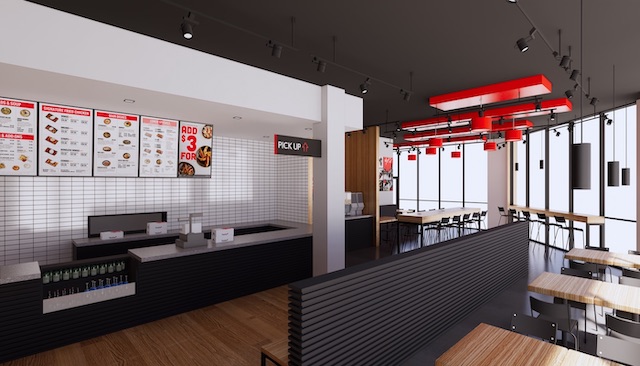 22 Things You Need to Know About the Bonchon Franchise

1.  In mid-November 2020, Bonchon announced the relocation of its New York City headquarters to Dallas, Texas by January 1, 2021. In addition to a new HQ, Bonchon is launching a fast-casual restaurant model, incorporating a new interior design, new service model, and streamlined menu. The new model will apply to select new franchise openings and new corporate restaurants and will strengthen Bonchon’s ability to continue to grow online ordering, which accounts for over 50% of its current revenue.

2.  The company’s move to Dallas aligns with plans to build a bigger retail footprint in Texas. Bonchon expects to open its first company-operated fast-casual Dallas restaurant in Addison, TX in February of 2021, and anticipates another 3-4 openings, including a delivery and carryout only location, in Texas within the year.

3.  Flynn Dekker, CEO of Bonchon and a veteran of the Dallas restaurant industry, said, “The shift to a new fast causal model combined with our corporate relocation to Dallas, will create an even stronger foundation for Bonchon’s continued national growth along with our accelerated growth across Texas. While harnessing our growing popularity in the United States, Bonchon has learned valuable lessons from the past few months. We have created an exciting and streamlined new design and a comfortable, sophisticated fast-casual experience for fans and initiates of our popular Korean fried chicken.”

4.  The transition of Bonchon’s corporate office will result in a more centralized location to better serve franchise partners on both coasts, while creating new opportunities for candidates in the Dallas region and also allow existing New York employees to transition to Dallas or work remotely. Bonchon has already begun hiring in Dallas and expects to add about 20 new team members, a number that is expected to grow over the next several years, in addition to the team members already added in the Dallas area.

5.  Bonchon’s new fast-casual restaurant design captures the energy and momentum the brand is experiencing amid an acceleration in business over the last few months. The cutting-edge new look melds eye-popping colors and modern furniture with urban design and bold street art-inspired graphics.

7.  In addition, a newly-condensed menu focuses on customer favorites as well as new recipes and menu enhancements stemming from innovative product testing within the corporate locations and the Busan global test kitchen – where all of Bonchon’s signature sauces are produced.

8.  In early July 2021, Bonchon revealed that the brand continues to outpace the restaurant industry with explosive growth, record revenue, and industry accolades – all derived from the chain’s strategic shift in operational initiatives and the hard work and passion of their franchise partners and team members.

9.  Bonchon’s strong sales performance was an outlier throughout 2020 despite the global challenges faced by the restaurant industry. According to Black Box Intelligence data, Bonchon consistently outpaced all other restaurant segments in 2020 while continuing to grow its U.S. store count and positive same-store sales. They’ve maintained this momentum through 2021 with positive 15.3% same-store sales as of June 26, 2021.

10.  Bonchon CEO Flynn Dekker said, “Bonchon remains one of the fastest growing restaurant brands in the United States thanks to the hard work and perseverance of our franchise partners and team members during a year of unprecedented industry challenges. Sales growth has steadily increased due to strategic enhancements in operations, supply chain and technological innovation. These strategic shifts have not only allowed Bonchon to build our revenue even further, but also to continue expanding our footprint with new openings across the U.S.”

11.  Bonchon’s impressive performance has been fueled by quick, aggressive pivots into new technologies and streamlined operations, including a standardized POS system, launch of online ordering, strong partnerships with third-party delivery companies, and delivery integration through their proprietary online ordering channels in partnership with DoorDash Drive.

13.  Earlier this year, Bonchon launched its first two company-operated fast-casual restaurants, which debuted in Addison, Texas and Towson, Maryland. The new model has been well received by franchise partners, so much so that 72% of the 23 locations planned to open by year’s end will be the fast-casual format. Bonchon continues to offer flexibility in restaurant design with casual, fast-casual, and non-traditional service models.

14.  The accomplishments around increased sales and an increased domestic footprint have garnered the company numerous accolades over the past year. Most recently, Bonchon was acknowledged for the first time in Nation’s Restaurant News’ 2021 “Top 500 Restaurants” where they ranked #208 and were in the top 10% out of the top 250 in terms of unit growth. Bonchon was also named Fast Casual Magazine’s 2021 “Top 100 Movers & Shakers” for the second year in a row and made their debut in Entrepreneur’s “2021 Franchise 500 List.”

15.  In mid-April 2021, Bonchon launched a “Stop Asian Violence” fundraising campaign designed in response to the increased number of attacks against the Asian-American and Pacific Islander populations. As part of the campaign, Bonchon has created a line of custom T-shirts where one hundred percent of the proceeds from the sale of each shirt will be donated to GoFundMe’s AAPI Community Fund, a fund committed to rectifying the racial inequalities in our society. Bonchon will also match the dollar amount raised from the overall sales.

16.  Each shirt has “Stop Asian Violence” inscribed over the wearer’s heart, below the Korean symbol for love. Across the back, Bonchon’s “Stop Asian Violence” mission statement reads: “Be kind with Open arms, with No hate. Instead, be filled with Compassion & Harmony. We are One world and should come together in uNity.”

17.  Bonchon is simultaneously supporting this urgent mission from within, offering a day off to all corporate team members who volunteer for any non-profit supporting the AAPI community or who participate in a peaceful demonstration.

18.  Bonchon CEO Flynn Dekker said, “The Stop Asian Violence Campaign offers Bonchon customers and non-customers alike another effective way to show their support for the inclusion of all people in the U.S., while helping to halt violent attacks directed towards the AAPI community. This initiative is just one example of our growing commitment to a national cause that promotes unity, harmony, and equality and is just part of Bonchon’s dedication to communities in need of support.”

19.  Some of Bonchon’s past charitable efforts have included granting workers and company employees a day off to join peaceful protests for Black Lives Matter, as well as the day off to vote or volunteer at their local polling places. Bonchon also launched Hearts & Soles, a program selling fashionable socks and sneakers to raise money for furloughed restaurant workers affected by the COVID-19 pandemic through the National Restaurant Association Educational Foundation’s Restaurant Employee Relief Fund. Throughout the pandemic, Bonchon has provided free food at hospitals and clinics across the U.S. and paid bonuses to its own frontline workers.

20.  Bonchon was founded in 2002 by Jinduk Seh in Busan, South Korea. Seh wanted to share his love of Korean-style fried chicken, which is crispier yet lighter than American fried chicken, with others. He spent time developing a unique batter and frying process that makes Bonchon’s chicken very crispy. When Seh was satisfied with the texture of the chicken, he worked on the sauces and decided on Soy Garlic and a unique Spicy sauce, which Seh felt embodied the flavors of Korean cuisine. Although Bonchon’s main focus is Korean fried chicken, the chain also serves traditional Korean dishes like Japchae, Buldak, Bulgogi, and more.

21.  Following the success of the first Bonchon location in Busan, Seh opened more restaurants around Korea. Bonchon’s first international store opened in Fort Lee, New Jersey in 2006. A few years later, in 2009, Bonchon Global Headquarters was formed and the chain continued to open in other countries over the next few years. Today, there are Bonchon restaurants across South Korea, the United States, Cambodia, Malaysia, Thailand, Singapore, Bahrain, Kuwait, Indonesia, Vietnam, Myanmar, and the Philippines.

Next post: Q&A with David and Heather Leuterio, Curry Up Now Sacramento Franchisees