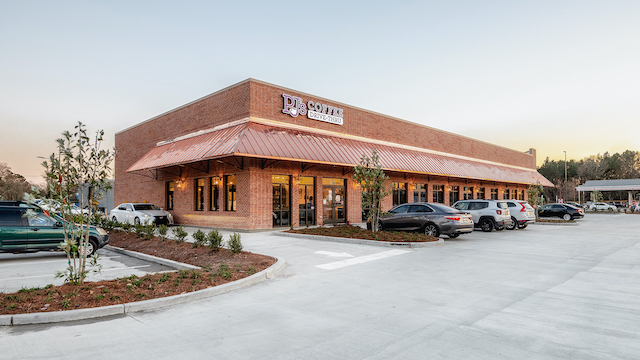 1.  At the beginning of November 2020, PJ’s Coffee announced its partnership with Children’s Hospital New Orleans to support young artists and celebrate the start of the holidays with a seasonal cup. Designed by patients in Children’s Hospital’s Art Therapy Programs, the cup featured quintessentially New Orleans-style shotgun houses, a second line of alligators, and festive lights hung from streetlamps in homage to the sights of celebrating the holiday season in the Crescent City. The cups were available in stores throughout the holiday season.

2.  Through the design of the new cups, PJ’s Coffee highlighted Children’s Hospital’s arts in healthcare, child life, and creative therapy programs, which use play, art, and music to help kids cope with illness, treatment, and hospitalization. In addition, throughout the holiday season, customers at PJ’s stores could donate $1, $3, or $5 as part of Children’s Hospital’s Light Up the Season Campaign.

3.  PJ’s customers had the opportunity to have their name displayed on light bulbs in stores. PJ’s Coffee team members also assisted in writing messages of hope and encouragement on the light bulbs that were shared directly with the patients and families spending the holidays in the hospital.

5.  Leslie Monson, chief marketing officer of PJ’s Coffee, said, “We are proud to partner with Children’s Hospital this holiday season. The medical care they provide to children throughout Louisiana and the Gulf South is vital. The artistic talents of Lizzie and Mindy featured on our PJ’s holiday cups are sure to light up the season for our customers and the communities we serve.”

8.  For those making dairy-free choices, oatmilk is now a permanent option at PJ’s Coffee stores nationwide. In addition to multiple health benefits, oatmilk has a creamy consistency in comparison to other plant milks, making it a great choice for coffee beverages.

9.  According to Reid Nolte, vice president of brand strategy for Ballard Brands, “Oatmilk is becoming a popular choice across the country and we’re excited to give our customers this option on the menu. The new Honey Oatmilk Latte is delicious with just the right amount of sweetness, just like our Honey Macadamia Crème beverages.”

Ramps Up Franchise Opportunities in 2021

10.  At the beginning of March 2021, PJ’s Coffee reported that despite setbacks in the restaurant industry due to the ongoing COVID-19 pandemic, PJ’s Coffee franchisees were busy brewing the brand’s signature gourmet coffees, retaining the brand’s community-focused culture, and supporting the front line workers who keep everyone safe. The brand, its franchisees and team members, and growing base of dedicated customers came together and stood strong.

11.  In the end, the once-in-a-lifetime pandemic was no match to PJ’s Coffee’s solid growth during 2020. The brand saw a 15 percent increase in franchises awarded during the first half of 2020, outperforming the past three years of franchise development. The company awarded 32 franchise agreements representing 58 licenses to mostly new operators – 26 new franchisees and 6 existing owners expanding their portfolios of PJ’s Coffee locations.

12.  All told, franchisees opened 20 new locations during the year and the brand’s portfolio soared past 120 locations. Even still, brand officials said 2021 has the potential of being an even better year for growth and they expect to open 48 more stores in 2021.

13.  Ryan Stansbury, VP of franchise development for PJ’s Coffee, said, “As we continue to build momentum, we’ve set a goal of awarding 50 franchise licenses – half of which we anticipate will be multi-unit agreements. Our primary target markets are in the south and east, from Texas over to Florida and up the east coast. But we’ll consider growth opportunities in other markets across the U.S. if it’s the right fit.”

14.  One of the brand’s secrets to success in 2020 was the drive-thru. Customers flocked to drive-thru locations for safe, convenient, and quick service. As a result, franchisees experienced an increase in customer traffic and spike in sales. “Drive-thru locations are not only a function of convenience and increased revenue but also a necessity to meet an even greater shift in consumer behavior,” added Stansbury.

15.  Of course, it’s the coffee that brings customers to PJ’s Coffee. The brand offers a variety of hot, iced, and frozen coffee beverages using only the top 1% of Arabica beans. Organic tea and fresh breakfast pastries are also available. PJ’s Original Cold Brew Ice Coffee is brewed daily using a special cold-drip process that protects the flavor and strength of the beans, while producing a coffee that is 2/3 less acidic – a process and technique pioneered by the company’s founder and used for more than 30 years at all PJ’s locations. Customers can also take home bags of whole bean coffee, single serve cups of PJ’s Coffee, and PJ’s Iced Coffee Concentrate.

16.  Franchisees eagerly validate the success they’ve experienced with PJ’s Coffee. “Despite all the challenges we faced last year, I think it’s evident that the coffee industry is still going strong,” said PJ’s Coffee franchisee Tyra Harris. “We’re ecstatic to be a part of a brand that has continued to grow, even with the hurdles of navigating a pandemic, and we’re equally thrilled to be able to bring premier quality coffee to our community.”

17.  PJ’s Coffee was founded in 1978 by Phyllis Jordan (PJ) in the Carrollton neighborhood of New Orleans, Louisiana. Jordan, who had moved from Des Moines, Iowa, wanted to start her own coffee shop that offered coffee made with high quality beans and superior roasting techniques. Jordan’s coffee was a hit and she expanded the PJ’s Coffee brand around the New Orleans area.

18.  In 1989, Jordan started franchising the PJ’s Coffee concept and opened the first stores outside of New Orleans in Hammond, Louisiana and Picayune, Mississippi. Eventually, PJ’s Coffee expanded to other states in the Southeastern United States and as far as California.