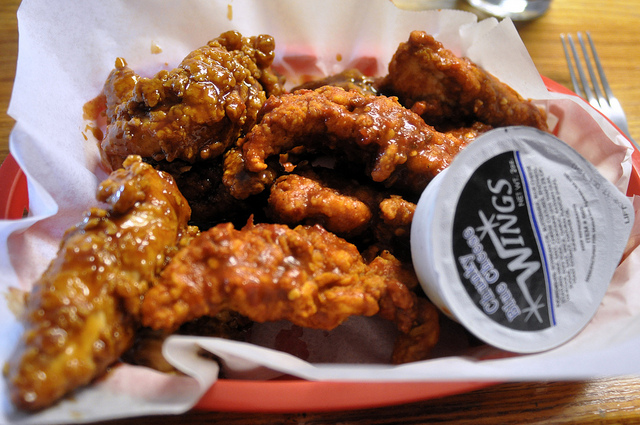 18 Things You Need to Know About the Wings Over Franchise

Gives Away Kids Meals to Families Affected by COVID-19

2.  Dan Leyva, Wings Over’s chief wing officer, wrote in a letter, “At Wings Over, we take great pride and responsibility in being a part of our local communities. During times of uncertainty, we will be here for you. We know that there are a lot of families being affected due to school closures, workforce reductions, and many other situations. While we know we can’t help fix everything, we hope we can provide some relief to those who need it.”

3.  In early November 2020, Wings Over introduced its new Fire Buffalo sauce, made with Ghost Peppers, the restaurant’s hottest sauce to date. Wings Over infused the brand’s signature Buffalo Sauce recipe with the burning, unmistakable heat of Ghost Peppers to create the spiciest sauce on the menu.

4.  According to Dan Leyva, Wings Over’s chief wing officer, “Our goal was to create a delicious Buffalo Sauce with an incredible heat level to challenge the bravest heat seekers. Our all-new Fire Buffalo is a wild ride that starts off with a burst of flavor and within a few seconds will have you looking for an ice-cold drink to cool off.”

6.  Leyva added, “We truly have something for everyone now. Fire for the fearless, and this incredible new Mild Buffalo sauce that is perfect for guests who want the classic buffalo flavor without much heat.”

7.  In early 2021, QSR Magazine released its 40/40 List for 2021. The list features 40 fast-casual concepts with less than 40 locations that are primed for growth and future success. Wings Over was included on this list and QSR discussed how the brand is surviving the COVID-19 pandemic and its plans for the future.

8.  The feature started out with the story of how Wings Over came under new ownership in 2017. According to QSR, “It all started as a joke among a group of Cornell alumni. Wings Over, their favorite restaurant in Ithaca, New York, was closing, and Dan Leyva texted his friends to suggest they reopen the franchise there.” Leyva added, “I was really just joking when I sent that text message. But by the end of that evening, it had turned into a very real opportunity. And within a couple of months, we had a lease signed.”

9.  Things progressed from there. Leyva said the business partners found opportunities to improve “literally every single part of the business” as franchisees, from its training standards to its food quality to its POS technology. And in October 2017, Leyva and his friends acquired the whole company, which had grown to 30-plus locations in about 20 years. What followed was a soup-to-nuts reimagining of the brand built around three core values: great people, amazing food, and “smileable experiences.”

10.  While Wings Over had previously thrived in college towns, Leyva – now the chief wing officer – said the new ownership team saw potential in the universal appeal of the menu, which includes not just wings, but also chicken sandwiches, salads, and even ribs. Leyva said, “When you think about who eats this type of food, it’s everybody: It’s kids, it’s parents, it’s moms, it’s dads, it’s business people, it’s late-night drunk kids. When you go to a sports bar to have wings, that’s one type of environment, and there’s a place for that. But we wanted to focus on having fresh chicken where we hand-breaded and cooked to order. That allowed us to focus on being a family-friendly type of establishment.”

11.  When COVID-19 hit, the Wings Over team quickly shut down dining rooms and has kept them closed ever since (as of the date of the article). It ramped up its digital services to accommodate takeout and delivery, and it placed a priority on ensuring its teams were safe and community members in need were fed. Beyond that, Wings Over leaders took the opportunity to reevaluate the business infrastructure and tighten the screws.

12.  Levya said that he isn’t too concerned about the flood of wings brands that have sprung up during the pandemic, particularly as virtual concepts. He said Wings Over’s quality and long history with delivery are differentiating factors. Indeed, many of the challenges that lie ahead for the brand are things it was already working on prior to COVID.

14.  Wings Over will open a few more locations in 2021 before prioritizing additional growth in the Northeast and Midwest in the coming years.

15.  Wings Over was founded in 1998 by Patrick Daly and Harold Tramazzo at the University of Massachusetts in Amherst. Daly and Tramazzo set out to create food that was quick, affordable, yet better quality than other chains around the university. The wings Daly and Tramazzo created were a hit with the local college students, and Wings Over developed a cult following. Over the next few years, Daly and Tramazzo opened additional locations around college campuses in the region.

16.  Daly and Tramazzo continued to own and operate Wings Over, but the company’s growth had stalled and several locations were closed. In 2017, Delectable Capital, which is run by a group of college friends who had loved the Wings Over location near Cornell University, initially bought one franchise in Ithaca, New York. However, they were frustrated with the parent company’s lack of investment in the brand, and approached Daly and Tramazzo about buying the company.

17.  Following the acquisition, Wings Over launched an extensive rebranding campaign, which included improving the menu, overhauling the chain’s online ordering system, and updating the restaurant design and branding. Delectable Capital hopes that the changes will fuel the national growth of Wings Over as the chicken wing market continues to grow in the U.S.