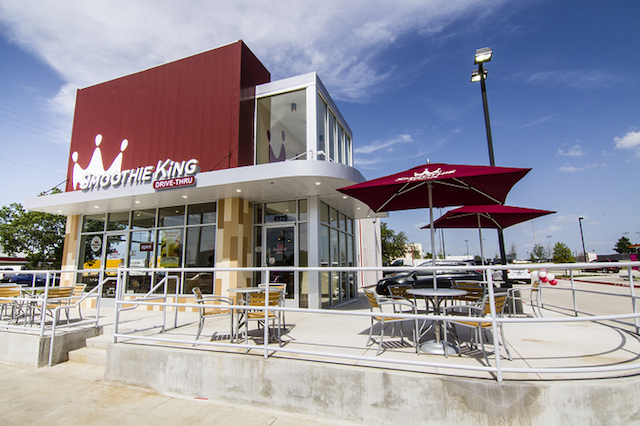 26 Things You Need to Know About the Smoothie King Franchise

Donates Over $1 Million in Smoothies to Essential Workers

2.  CEO Wan Kim said, “This pandemic is like nothing we’ve ever seen before, yet essential workers everywhere are still expected to show up to work and put their health and safety at risk. By donating $1,000,000 in smoothies, we wanted to help these heroes on their health and wellness journeys while they helped others do the same. Our goal was to give back to the heroes keeping all of us safe, and we’re thrilled to have reached that goal.”

4.  Kim added, “I couldn’t be prouder of how our entire company responded. It wouldn’t have been possible without our franchisees, partners and team members. Smoothie King is also thankful to those guests who participated and helped achieve the donation goal. Together, we helped provide thousands of healthier, on-the-goal meals to people that really needed it.”


5.  In mid-June 2020, Smoothie King announced a new, exclusive partnership with DoorDash, which allows the lifestyle smoothie brand to expand its guest reach and inspire more healthy and active lifestyles by meeting guests where they are. Beginning in early May, guests near any of the nationwide Smoothie King locations could order all 83 purpose blends through the DoorDash app or website for delivery or pick up.

6.  Smoothie King CMO Rebecca Miller said, “As the world continues to face the challenges of living a new normal, Smoothie King’s partnership with DoorDash – a leader in the off-premise space – provides a convenient, safe, and nutritious meal-replacement option for guests when they need it most. Every smoothie on our menu is purposefully crafted to serve as an integral part of each guest’s health and fitness journey. We’re excited to expand our reach and help even more guests keep up with their healthy lifestyles wherever they are.”

8.  Smoothie King orders can be placed via the DoorDash website or app, available for iOS and Android. Your favorite blends will be delivered with a “no-contact” delivery. Smoothie King delivery orders include tamper-resistant packaging.

10.  In early August 2020, Smoothie King disclosed that it has maintained a steady development pace since the start of the year, opening 31 new domestic locations and 119 international locations while also signing 38 U.S. franchise agreements. The brand expected to open a total of 80 new U.S. locations by the end of 2020.

11.  “Our franchise system continues to grow because of our brand’s mission and vision and how we help our franchisees fulfill those promises,” said Smoothie King CEO Wan Kim. “As a result, we’re seeing more like-minded owners invest in our purpose-driven brand. Guests are going to be prioritizing their health and wellness even more going forward, and we fulfill those needs unlike any other concept.”

12.  Following the throes of the pandemic, Smoothie King is rebounding at an impressive rate, experiencing a 14-percent systemwide sales jump year-over-year for July. This includes the brand’s 400-plus drive-thru locations, which are averaging a 26-percent increase for the month versus 2019 sales data. Similarly, in June, Smoothie King’s franchisee in Greenwood, Indiana, set an opening-week sales record at their new location – recording $45,759 in total sales.

13.  “The momentum we gained during the pandemic by focusing on our guests’ needs has set us up for an exciting and dynamic year in terms of both sales and store growth,” said Kim. “I can’t wait to see what our franchise owners accomplish in the second half of 2020.”

14.  As Kim alluded to, Smoothie King has introduced several guest-focused initiatives since the beginning of the pandemic to meet the convenience and safety needs of guests. In February 2020, Smoothie King began rolling out its digital initiatives. The first step was launching online ordering for in-store pickup on its Healthy Rewards loyalty app and webpage. The brand then launched curbside pickup in early April and announced an exclusive delivery partnership with DoorDash in early May to make living a healthy and active lifestyle more convenient while expanding the brand’s reach.

15.  Kim added, “We were pleased that our digital rollout happened as quickly as it did. After we introduced online ordering, curbside pickup and delivery, digital sales surged well past our expectations. Moving forward, these initiatives will only continue to help both our company and our franchisees capitalize on shifting guest trends.”

17.  To continue prioritizing the safety of its guests and team members, Smoothie King has announced that beginning August 5, facial coverings would be encouraged when visiting all U.S. locations. They would not be required when ordering at the drive-thru, when using curbside pick-up, or placing an order for delivery.

18.  The attraction to Smoothie King’s franchise opportunity is also due to the comprehensive support franchisees receive – which has been on full display since the beginning of the COVID-19 pandemic. To support its franchise owners during the pandemic, Smoothie King deferred all royalty payments and technology fees and completely waived national advertising for March and April. Consequently, Smoothie King franchisees were able to retain 100% of their cashflow to operate their businesses during the hardest months of the pandemic so far.

19.  According to Kim, “Our franchisees are family, and we understand how hard this time has been for them and their families. We wanted to show them how much we appreciate their efforts over the last couple months as they continued to help inspire guests to live healthy and active lifestyles. Without our dedicated franchisees, we cannot live out our mission and vision.”

20.  The Smoothie King development team has also worked diligently to support franchisees as they negotiated with their landlords to alleviate their monthly rent obligations by either deferring payments or forgiving them altogether. Other franchisee-support tactics Smoothie King has implemented during the current pandemic include holding weekly franchisee webinars covering topics like applying for PPP loans, developing a COVID response plan, and marketing promotions to encourage online ordering and drive sales.

21.  These purpose-driven efforts, from both a guest and franchisee perspective, have and continue to translate into growth for the brand. In 2020, Smoothie King added new locations in markets like New Orleans, Washington, D.C., San Antonio, Tucson, Baton Rouge, and Louisville. A total of 15 stores began blending in Q1, another 11 opened in Q2, and five opened in July. Additionally, the 38 signed-and-accepted franchise agreements are projected to produce 41 future locations. This is the result of 26 existing owners reinvesting in the brand and 12 new franchisees joining the system in 2020.

22.  “Joining Smoothie King is as much a commitment to our brand as it is to our business, and we believe our actions over the last couple months will only continue to attract the kind of owners we’re looking for,” said Kim.

23.  Smoothie King was founded in 1973 by Steve Kuhnau and his wife Cindy in Kenner, Louisiana. After Kuhnau learned that he was lactose intolerant, he started experimenting with making alternative treats to the milkshakes that he still craved. He began mixing real fruit, nutrients, proteins, and other supplements together until he developed a satisfying smoothie. Not only did the smoothies taste good, Kuhnau began to notice that they had a positive impact on his health. Kuhnau wanted to share his smoothies with others, so he opened the first Smoothie King with his wife.

24.  Over the next decade, the Kuhnaus continued to grow the Smoothie King business and they started franchising the concept in 1989. Smoothie King eventually became one of the largest smoothie franchises in the United States. The Kuhnaus owned and operated Smoothie King until 2012, when they decided to sell the company to Wan Kim – a South Korean Smoothie King franchisee since 2002.

25.  Under Kim’s leadership, Smoothie King pushed international expansion, especially in South Korea. Kim also began experimenting with selling salads and wraps at these South Korean locations. By the end of the 2010s, Smoothie King had more than 1,000 locations operating around the world. Today, there are Smoothie King shops in the United States, South Korea, the Cayman Islands, and Singapore.