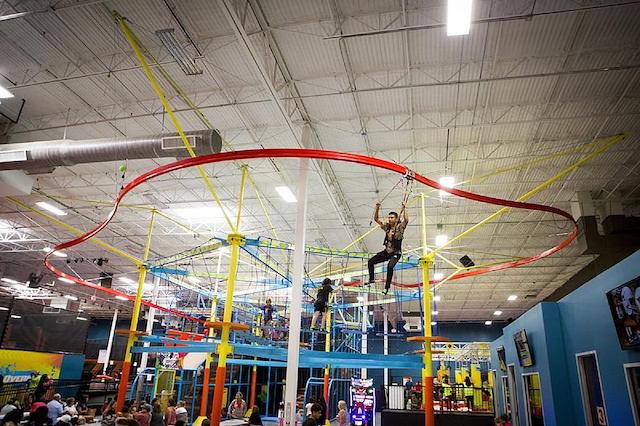 
1.  At the end of January 2020, Zimmerman Advertising was named Agency of Record for Urban Air Adventure Park, the nation’s destination for family fun featuring a variety of attractions perfect for all ages. The company is known for endless hours of entertainment, trampolines, rock climbing, dodge-balling, and more.

3.  Jessica Correa, chief marketing officer of Urban Air Adventure Park, said, “Urban Air is experiencing tremendous growth and we needed a marketing partner with a proven record to help us stay ahead of the game. Urban Air is a place where families make memories together in a safe, fun, clean and affordable environment; and we are fully confident that Zimmerman will help us develop the right message to reach the right consumers at the right time.”

4.  Michael Goldberg, CEO of Zimmerman Advertising, said, “Urban Air’s potential is limitless and their executive team has the right ambition and experience to succeed. We love to work with companies with this mindset because our growth engine was built for brands just like this.” Jordan Zimmerman, founder and chairman of Zimmerman Advertising, added, “We’ve got big plans for Urban Air to help accelerate success for them and we are absolutely thrilled to partner with them. Let the fun begin!”

6.  The Endless Play Membership offers unlimited access to Urban Air’s next level attractions such as Indoor Sky Diving, Go-Karts, the Sky Rider Coaster, Spin Zone and Flip Zone Bumper Cars, Climbing Walls, Rope Courses, and more. With memberships starting as low as $6.99, the program allows guests to come back every day for a fraction of the price of a single visit.

7.  Michael Browning, president and CEO of Urban Air, said, “We’re incredibly proud of our team and our franchisee partners for making the Endless Play Membership program such a success and we’re honored to be recognized with this award. At Urban Air, we continue to make strides in innovation and franchisee support and this program is another example of that dedication. For our franchisees, the program has created an e-commerce-based revenue stream that helps build brand loyalty and increase visitation frequency while providing our guests with an amazing value.”

8.  The goal of the Franchise Innovation Awards is to identify and recognize the franchisors creating and implementing the most original and successful innovative strategies and tactics to build their brand. Winners were selected by a panel of seven judges who evaluated the innovation, objectives, and results of hundreds of entrants.

10.  To qualify for the Ultimate Adventure multi-unit growth program, franchisees must sign a 3-pack franchise agreement prior to December, 31, 2020 and open all three parks within 24 months (18 months for the first two and 24 months for the third). The incentives include Attractions Purchase Credits, waived Initial Franchise Fees, and Renewal Fee discounts.

11.  Josh Wall, chief franchise officer of Urban Air, said, “Urban Air had an extraordinary year of industry-leading growth in 2019, and we are proud to continue our expansion across the country despite the current environment, supporting our franchisees as they have reopened while also welcoming new franchise partners into the family. Given the growing demand that we have seen over the last months, we are excited to offer this incentive program to successful multi-unit owners looking to take advantage of the current commercial real estate landscape. Our model is ideal for multi-park owners – which represent half of our current franchise system – and we are relentless in our pursuit of new ways to support our franchisees as they expand their portfolios and continue to reinvest in the Urban Air brand.”

12.  This news comes as Urban Air continues to rapidly expand across the country, opening over 50 parks in 2019, and 18 new locations during the first half of 2020. The company’s pivot to virtual Discovery Days and remote recruitment has continued to fuel franchisee interest, with 11 of last year’s 16 new franchise agreements signed since March. With another 16 parks scheduled to open before year-end, Urban Air will surpass a system-wide total of more than 150 open locations.

13.  Urban Air Adventure Park was founded in 2011 by Michael Browning, Jr. with help from his father, wife, and mother, in Southlake, Texas. Browning, who was a marketing software developer, said that he wasn’t looking to start a new business when he visited a trampoline park for the very first time. However, he was excited by what he saw and began developing his own trampoline park concept.

14.  Although Browning and his family had no experience in the entertainment and attractions industry, the first Urban Air Adventure Park was a success. The Brownings opened a second location in the Dallas-Fort Worth area.

15.  After finding a mentor in Jay Thomas, who was vice president of international park development for Six Flags, Browning refined the concept for Urban Air and began expanding the Adventure Park’s offerings to include bowling, ropes courses, climbing walls, indoor coasters, skydiving, and go-karting.

16.  Initially, Browning didn’t have plans to franchise Urban Air, but customers kept asking if more locations would open in their hometowns. At that point, Browning discovered the added value of the systems and procedures he and his partners had created so they could run more than one location.

17.  In 2018, Urban Air received a strategic investment from MPK Equity Partners and AHR Growth Partners to help the brand continue its expansion. Today, there are Urban Air Adventure Park locations around the United States and one international location in Vienna, Austria.