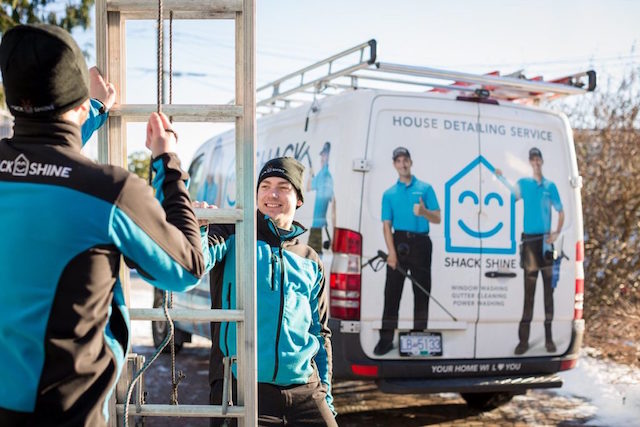 15 Things You Need to Know About the Shack Shine Franchise

1.  In early July 2020, Shack Shine interviewed one of its newest franchisees, Alex Blackwell, who moved from Kansas City to Ormond Beach, Florida earlier that year to start a Shack Shine franchise. Blackwell retired after 33 years as vice president of a printing company in Kansas City and decided to fulfill his dream of owning his own business.

2.  Blackwell said, “I retired from a 33 year career in printing, and I’ve always wanted to own my own business, it was now or never. I’m probably older than the typical franchise partner coming in, but I see that as an advantage – because I can leverage my previous career and use that experience to build a profitable Shack Shine business. So really, the answer is now or never!”

3.  When asked why he chose Shack Shine, Blackwell said, “Well, I wanted to invest in a business in home services. My wife and I love to work on homes. So home services was the market segment I wanted to invest in. And Shack Shine is a great fit with Florida, because the climate in Florida lends itself to year round service. It was a very modest investment too, so that was a factor, but I think the real ‘deal sealer’ was the culture at O2E Brands. It exceeded my expectations. Just the … honestly, it was just the quality of the people – how much they truly cared about my success, it just blew me away.”

4.  He added, “Again, my dream was always to own my business. In one of Brian Scudamore’s Founders Stories podcast episodes, one of the franchise partners said: ‘it’s freedom within a framework,’ and that sums it up for me really. I can finally own my own business, but I have the support and the framework of many successful people behind me.”

5.  On a final note, Blackwell said that he wants Shack Shine to be his legacy, something he can pass down to one of his children someday.

6.  A year after Shack Shine began franchising in 2016, it was revealed that millennials accounted for 75 percent of the brand’s demographic. Shack Shine offers lower start-up costs than most franchises and hands-on support for young business owners. The company is part of O2E Brands, the umbrella company behind 1-800-GOT-JUNK?. O2E touts its brands as “EntryPreneurship” franchises, encouraging collaboration among entrepreneurial young people who are looking for an obtainable way into business ownership.

7.  Shack Shine and other O2E Brands require franchisees to go door-to-door to build up their clientele and are low-tech ways for millennials to try their hand at startups. Dave Notte, managing director of Shack Shine, believes it’s the mentoring O2E Brands provides their franchisees that helps draw in young people.

8.  According to Notte, “Millennials can build something from the ground up which is a very rewarding experience on its own. Shack Shine also fosters a youthful and very energetic culture which they all love being a part of. Start-up costs are also lower than other franchise systems.”

9.  Kit Hulbert, a millennial franchise partner at Shack Shine, decided to get into franchise ownership while attending the University of British Columbia. He began as a College Pro Painting partner before moving on to Shack Shine in 2015. Hulbert said, “I could have taken the route of starting my own business without an already existing brand, but that could have taken forever to build. There are no guarantees that it would have worked and it would take a lot of money to start up my own business with my own brand.”

10.  Hulbert said he chose Shack Shine because the brand offers a lot of continued support and guidance for business owners and agrees that start-up costs are lower than other traditional franchise opportunities.

11.  But O2E Brands is not for those who aren’t willing to put in the hours as an owner and an employee, Hulbert adds. “Shack Shine is not the type of opportunity where you can just invest your money, hire a bunch of staff and expect to see results,” he said. “A lot of long days, weeks, and months have gone into getting where I am today and I anticipate it not stopping anytime soon. This is what it takes to get this business going and that is what it takes to make something great happen.”

13.  Initially, Scudamore rejected the pitch even though there was potential in the concept. According to Scudamore, it was the “right idea, wrong time.” However, Notte was persistent and Scudamore eventually felt that Shack Shine would fit right in with O2E’s other brands.

14.  Scudamore began developing a new brand identity for Shack Shine and presented it to Notte and a deal was struck in 2015. Since then, Shack Shine has been building its presence across the U.S. and Canada.