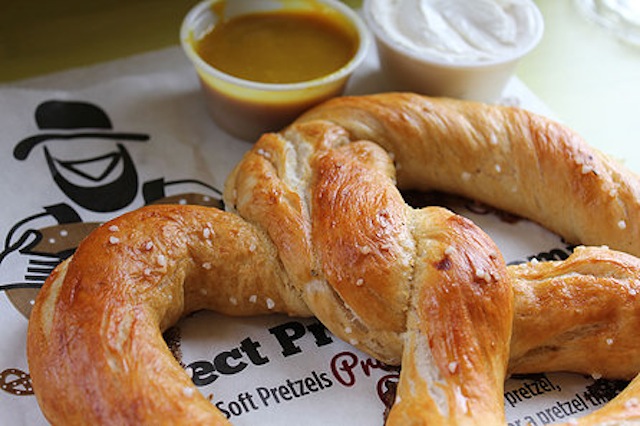 
1.  In late April 2020, Ben’s Soft Pretzels and its franchise partners teamed up with their communities to provide more than 6,000 free pretzels to the men and women battling on the frontlines, as well as to hungry kids. The Pretzel Partnership Program allowed members of the community to sponsor pretzel delivery to frontline workers of their choice.

2.  For a $30 sponsorship, Ben’s Soft Pretzels delivered 20 pretzels and 20 dipping sauces to a frontline organization. From hospitals, first responders, and delivery professionals, Ben’s has and will continue to deliver.

3.  Brian Krider, co-founder of Ben’s Soft Pretzels, said, “We are so grateful to the men and women who run in when we are running out. We are also very thankful to the communities that have become sponsors through our Pretzel Partners Program. Without them, we would not be able to financially put this many smiles on people’s faces. Some of the darkest times in our lives shed the brightest light on the greatness of the human spirit.”

4.  In addition to the Pretzel Partnership Program, several Ben’s Soft Pretzels bakeries elected to feed hungry kids by providing free pretzels to children 18 and under to help combat hunger in light of school meal programs being reduced or eliminated.

5.  Krider added, “We are not finished. We have thousands of more smiles to see. Our pretzels are not like anything else in the world. People just smile when they see a nearly ½ pound pretzel heading their way. We like it that way.”

8.  According to Brian Krider, co-founder of Ben’s Soft Pretzels, “The only items left to add are butter and a whole lot of love. This is a great product to make with family and friends. These are the same legendary pretzels you know and love from our fresh bakeries, stadiums, and arenas throughout the US.”


9.  In mid-June 2020, Ben’s Soft Pretzels expanded its business model by partnering with theme parks. A new pretzel location at the Holiday World and Splashin’ Safari in Santa Claus, Indiana is the pretzel company’s first location inside a theme park and came to fruition as a result of the company’s membership in the World Waterpark Association and The International Association of Amusement Parks and Attractions.

10.  Pretzel fans at Holiday World can enjoy a legendary, nearly half-pound, Jumbo Soft Pretzel with imported German salt along with a variety of sweet and savory hand-dipped sauces.

11.  When considering who would be the ideal candidate to operate this new location, Ben’s Soft Pretzels chose Ron Williams, a multi-unit franchisee and previous “Franchisee of the Year” to lead the charge. Williams operates three traditional locations in Indiana and Kentucky, in addition to two stadium venues, as well as a mobile food trailer.

13.  Brian Krider, co-founder of Ben’s Soft Pretzels, added, “The Ben’s Soft Pretzels Family could not be more excited to serve pretzels at one of the most legendary parks in the world. Holiday World and Splashin’ Safari is a perfect fit for our world famous soft pretzels. Two of the most exciting Indiana brands coming together to offer the best visitor experience. If I was a kid today and knew I could get a Ben’s Soft Pretzel right after riding the Thunderbird, I would never go home!”

15.  Ben’s Soft Pretzels was founded in 2008 by Scott Jones, Ben and Liz Miller, and Brian Krider in the Concord Mall in Elkhart, Indiana. The Millers, who lived on an Amish Homestead, baked and sold delicious treats throughout Northern Indiana and Southern Michigan. Next door to one of the Millers’ booths was a small pretzel company. The owner of the pretzel company asked the Millers if they were interested in purchasing the company.

16.  Although the Millers had no experience baking pretzels, they eventually decided to purchase the company. However, the Millers realized that they were only purchasing the equipment and not the previous owner’s pretzel recipe. After extensive trial and error, the Millers came up with what they felt was the perfect pretzel recipe.

17. In 2003, Jones met the Millers and fell in love with their pretzels. He knew that they had to share it with the world. Around this time, Jones introduced the Millers to his co-worker Brian Krider, who would join in on their pretzel business venture.

18.  After opening in 2008, Jones, the Millers, and Krider started franchising Ben’s Soft Pretzels in 2013. By 2018, the chain had grown to 75 locations and master lease agreements were struck with Walmart and Meijer. Additionally, Ben’s Soft Pretzels has partnerships with athletic teams such as the University of Notre Dame, Auburn University, Purdue, Wisconsin, Indiana University, University of Wisconsin, Indiana Pacers, South Bend Cubs, and many more.