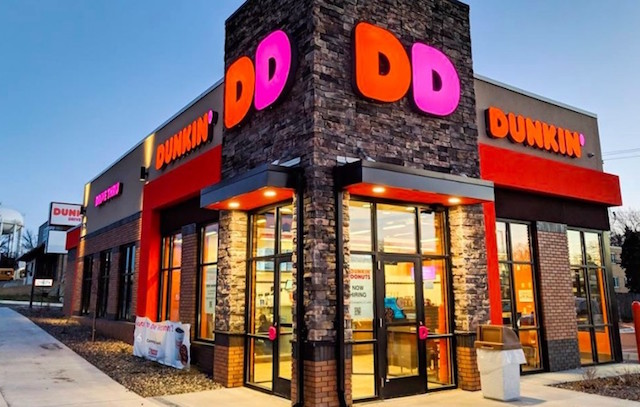 18 Things You Need to Know About the Dunkin’ Franchise

1.  In mid-December 2019, Dunkin’ announced that Scott Murphy, formerly chief operating officer of Dunkin’ U.S., had been promoted to president, Dunkin’ Americas. Murphy assumes the role from Dave Hoffmann, who continues to serve as CEO of Dunkin’ Brands.

2.  Murphy, a 15-year veteran with the company, will have responsibility in his new role for all aspects of operations, restaurant development, franchising, field marketing, supply chain, and consumer packaged goods (CPG) for the approximately 10,000 Dunkin’ restaurants in North and South America.

3.  Dave Hoffmann, CEO of Dunkin’ Brands, said, “Scott is a rare leader who is both strategic and impactful. He inspires all who work with him through his vision, attention to detail, and ability to implement change. During his tenure with the company, Scott has earned the respect of his peers, forged strong relationships with franchisees and suppliers, and contributed significantly to the company’s success with a strong focus on franchisee profitability.”

4.  Hoffman added, “He has also been a key leader in implementing the Blueprint for Growth, our five-year strategic plan for Dunkin’ U.S. His most recent accomplishments include the rollout of menu simplification, our highly successful espresso relaunch, operational improvements, and the expansion of our NextGen restaurants. I am confident that under Scott’s leadership, we will continue to build on our legacy of strong franchisee relations and drive customer noticeable change at Dunkin’.”

5.  Murphy joined Dunkin’ Brands in 2004 as director, international supply chain and became the vice president of strategic supply later that same year. In 2013, he was named chief supply officer and SVP international operations, and was promoted to senior vice president of operations, Dunkin’ U.S. and Canada in 2015. He was named chief operating officer of Dunkin’ U.S. in 2018.

6.  Prior to Dunkin’, Murphy was with A.T. Kearney, a global management consulting firm. He graduated from Georgetown University with a Bachelor’s degree in marketing and international business. He earned his MBA from the MIT Sloan School of Management.

7.  In early February 2020, Shell Oil Company (Shell), the largest fuel network in the United States, and Dunkin’ announced a national expansion of their partnership with the Fuel Rewards program. The “Sip Dunkin’, Save at Shell” partnership allows Fuel Rewards members with Gold Status and DD Perks Rewards Program members to save 10 cents per gallon every time they purchase five beverages at a Dunkin’ location.

8.  The “Sip Dunkin’, Save at Shell” promotion is planned to run through the end of 2020, giving members the chance to save at the pump all year long. Below is a breakdown of how all consumers can sign up to participate and maximize benefits:

9.  “Since launching six years ago, DD Perks has become one of the fastest-growing loyalty programs in our industry for quickly and conveniently delivering rich rewards and experiences for our members,” said Stephanie Meltzer-Paul, vice president, digital and loyalty marketing for Dunkin’. “Allowing our loyal members to link their DD Perks and Fuel Rewards accounts and save with each visit to the pump is yet another innovative way Dunkin’ is delivering meaningful value and fueling our on-the-go guests’ daily routines.”

10.  In mid-May 2020, as Dunkin’ continues to navigate the COVID-19 health crisis, the brand has simultaneously continued to advance key sustainability initiatives to serve both people and the planet responsibly. Dunkin’ announced that 100% of its restaurants globally have transitioned from polystyrene foam cups to paper cups, meeting the timetable established by the brand two years ago.

11.  In Dunkin’ U.S. restaurants, the foam cups have been replaced by double-walled paper cups. Dunkin’ is also on track to fully transition to new, recyclable hot coffee cup lids in all of its U.S. restaurants by the end of the summer, and is committing to doubling its number of DD Green Achievement restaurants within five years.

12.  The new, double-walled paper cups, made with paperboard certified to the Sustainable Forestry Initiative (SFI) Standard, are currently used to serve all Dunkin’ hot beverages, including coffee, espresso drinks, tea, and hot chocolate in the U.S. To meet guests’ expectations and preferences, the cups maintain heat retention properties comparable to the prior foam cups, keeping beverages hot while keeping hands cool, without the need for a sleeve. Dunkin’s transition to paper cups will remove approximately one billion foam cups from the waste stream annually.

14.  DD Green Achievement restaurants are built with sustainable and efficient elements including LED lighting, high-efficiency mechanical equipment, low-flow faucets, and more sustainable features. DD Green Achievement restaurants, which were designed to save between 15 to 20% of energy use as compared to traditional Dunkin’ restaurants, have proven to save approximately 33% of energy use, on average, when compared to conventional Dunkin’ locations, outperforming design anticipations.

15.  Dunkin’, formerly Dunkin’ Donuts, was founded in 1948 by Bill Rosenberg in Quincy, Massachusetts. Initially, Rosenberg called his little shop Open Kettle and served donuts for five cents and premium cups of coffee for 10 cents. Rosenberg, who had previously sold food in factories and at construction sites, chose to only sell donuts and coffee after realizing that they were the two most popular items. The concept was an immediate success and two years later, Rosenberg changed the company’s name to Dunkin’ Donuts.

16.  After a few more years, Rosenberg started franchising Dunkin’ Donuts in 1955. Over the next few years, Dunkin’ Donuts grew quickly around the United States. In 1963, Rosenberg’s son Robert became CEO of the company at age 25, and Dunkin’ Donuts opened its hundredth location that year. Dunkin’s expansion and success continued over the next few decades and by the end of the 1990s, the brand had grown to 2,500 locations worldwide with $2 billion in annual sales.

17.  In 2018, Dunkin’ launched a massive rebrand, including an updated restaurant concept and dropping the “Donuts” part of its name to reflect that the brand offers much more than just donuts and coffee. Today, there are Dunkin’ stores in over 46 countries.