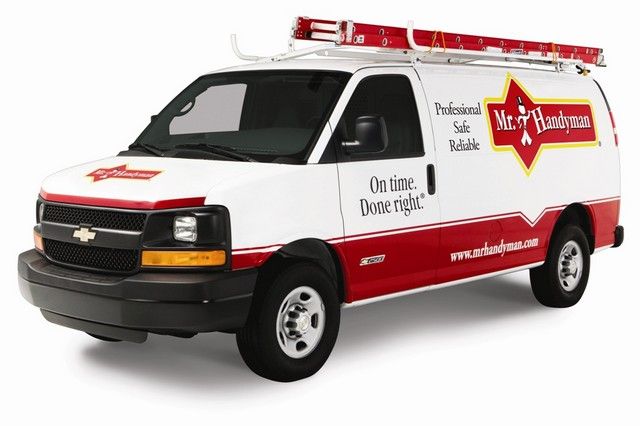 16 Things You Need to Know About the Mr. Handyman Franchise

2.  Neighborly’s Reunion is an annual celebration when thousands of franchisees across all home service brands, including Mr. Handyman, come together to hear corporate updates, interact with fellow franchise owners, and get motivated to grow their business.

3.  369 Neighborly franchisees successfully hammered nails into a block of wood at the same time, breaking the previous record of 299. The achievement was verified and presented by Mike Marcotte, an adjudicator from Guinness World Records.

4.  J.B. Sassano, president of Mr. Handyman, said, “We couldn’t wait to reveal this surprise of attempting to break a Guinness World Records title to our franchisees for this year’s Reunion. Mr. Handyman business owners across the nation work so hard and smashing this record was a unique and fun way to bring everyone together.”

5.  In early October 2019, Neighborly, parent company of Mr. Handyman, announced the appointment of Brad Stevenson as the company’s new chief development officer. In his new role, Stevenson will be responsible for developing and implementing the strategic direction of North American franchise development for 13 Neighborly franchise brands.

6.  These duties were previously overseen by Robert Tunmire, executive vice president of Neighborly, who retired that month following 44 years of contributions to the company’s franchise growth and development.

7.  According to Mike Bidwell, president and CEO of Neighborly, “Finding the right leader to fill this role, renamed from Executive Vice President to Chief Development Officer, was critical as we continue to expand Neighborly brands worldwide. Armed with 23 years of experience as an accomplished executive, we are confident that Brad Stevenson is the perfect candidate to take the lead on development and communication of Neighborly’s franchise development vision to the organization. We look forward to watching him inspire the development team to reach new heights in the years to come.”

8.  Prior to joining the Neighborly team, Stevenson spent his entire professional career with MillerCoors and Miller Brewing Company after first joining the organization in 1996 as an on-premise Miller marketing representative for United Beverage in Houston, Texas. Throughout his career with the adult beverage industry leader, Stevenson held numerous sales and marketing positions with the company, including vice president of grocery, director of business development and strategy, and regional chain director.

9.  Stevenson said, “Neighborly is widely respected as an ideal example of franchising excellence, as the organization continues to grow while still maintaining high service standards across its many brands. Nonetheless, even with the title of world’s largest franchisor of home service brands under its belt, Neighborly has aggressive goals set for continued growth, and I’m excited to work with this organization’s skilled development team to achieve those goals through franchise development.”

10.  In October 2019, Mr. Handyman celebrated the spooky season with a photo contest to give North America’s pumpkin carving pros a chance to show off their exquisite handmade creations. To enter the Pumpkin Carving contest, participants needed to visit the Mr. Handyman Facebook contest page and submit a photo of their pumpkin by Oct. 31 at 11:50 p.m.

12.  J.B. Sassano, president of Mr. Handyman, said, “We look forward to this pumpkin carving contest every year. It is always fun to see the great creativity that is behind these creepy creations. There are so many tips, tricks and techniques that people use to turn a simple pumpkin into a mortifying masterpiece.”

14.  After running Mr. Handyman for a few years, Lavalle sold the company to Service Brands International, a Michigan-based franchisor, in 2000 and franchising efforts began that same year. Over the next decade and a half, Mr. Handyman continued to grow around the U.S.

15.  Then in 2015, The Dwyer Group acquired Service Brands International and its affiliated franchise brands, including Mr. Handyman. Today, the Dwyer Group operates Mr. Handyman and its other home service brands under the parent company Neighborly. In addition to the Mr. Handyman locations around the U.S., there are international franchises in Canada, China, Ireland, and the United Kingdom.

Part 1 – Profit and Loss Statements for the Year Ending 2018

Table 1A – Average Data for Operators of a Single Territory