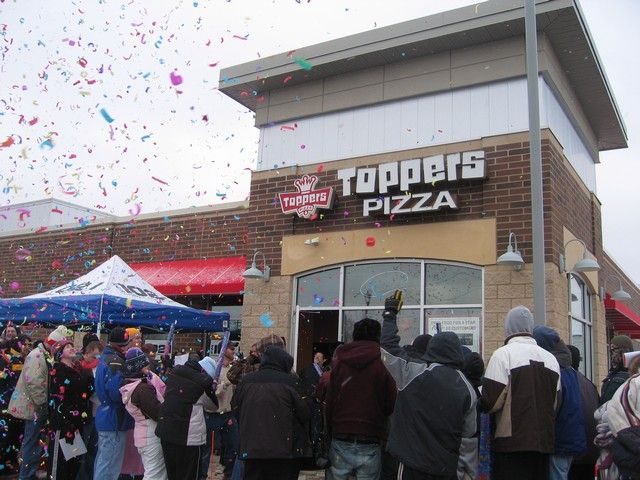 16 Things You Need to Know About the Toppers Pizza Franchise

1.  At the beginning of August 2019, Toppers Pizza announced the appointment of Tina Revell as their new director of e-commerce. Revell started with the company in June 2019 during their annual convention and has a strong background leading brands in digital innovation and e-commerce.

2.  Toppers Pizza has always focused on doing things differently, anticipating the trends of future pizza lovers. The company has invested in the proprietary PIZMET digital platform to drive their online and digital presence into the next decade, and Revell has been tasked with guiding that mission. Her first priority will be the transfer to the PIZMET platform in addition to creating stronger upsells, coupons, and features for the Toppers Pizza customer.

3.  Revell said, “Giving our customers what they want is one of our core values and something that the entire team strives to live up to every day. Digital is the heart of what our customers are doing every day and the PIZMET digital platform will guide how we speak to them (digitally) and the way we employ our e-commerce strategy.”

4.  Revell, a University of Wisconsin-Madison alum, most recently worked with Foot Locker as senior manager of digital optimization and personalization. Revell has focused on digital merchandising in the retail space for more than a decade, with stops at Shopko and RetailMeNot and experience studying and working overseas in both the United Kingdom and China before joining the Toppers Pizza team.

5.  “I’m looking forward to trying something new after working in the retail industry and bringing that same user experience into the food space,” said Revell. “There is a great opportunity to touch a lot of different areas of the business with room for growth; it’s a unique culture and there is a lot of support.”

6.  Revell will be revamping the user experience, ensuring strong digital touchpoints for Toppers Pizza customers and will also be focusing on launching the company’s loyalty program as well as looking to ways that the brand can disrupt the food industry.

7.  On a final note, Revell added, “The food industry is a very established industry and didn’t have strong digital presence until more recently. Today, a digital presence is the expectation of the customer. We need to figure out what the next big thing is, and get ahead of the trends in order to continue delivering for our customers. It’s exciting to be a part of determining how to drive that forward.”

8.  In January 2020, Jonathan Taylor, running back for the University of Wisconsin Badgers, announced that he will forgo his senior season and enter the 2020 NFL Draft. A few months later, in late April, as Taylor looks ahead to his bright future in the NFL, he’s taking the skills he has learned as an athlete into the business world as a franchisee of Toppers Pizza.

9.  The Wisconsin-born brand offers pizza, with more than a million combinations of fresh, high-quality toppings, Topperstix, baked Buffalo wings, Tots, Mac, monkey bread, and more. After just one bite of Toppers Pizza’s garlic parmesan wings at the Regent Street location in Madison, Taylor was hooked. Becoming a co-owner of the brand’s four Madison locations was a true full-circle moment for Taylor, and a decision he arrived at easily.

10.  According to Taylor, “The biggest thing that drew me to the organization was how friendly and open they were, inviting me to the team. When you meet the Toppers home office team, you get a warm, welcoming feeling. It’s like a family member that you see during the holidays that you can’t wait to spend time with. That family atmosphere is going to help me stay connected to Madison.”

11.  As a franchise owner, Taylor plans to continue giving back to the Madison community, which he did often in college, including working with organizations like Badgers Give Back and Badgers Penpals.

12.  Scott Gittrich, founder and president of Toppers Pizza, added, “At Toppers Pizza, we are all about our family, which extends from our customers to our team members to our franchisees. We are proud to welcome Jonathan Taylor into the Toppers Pizza family, and look forward to seeing how skills on the football field and love of Toppers’ food translate into business ownership.”

13.  Toppers Pizza was founded in 1991 by Scott Gittrich in Champaign, Illinois. Before starting his own pizza restaurant, Gittrich had worked for Dominos since 1984, when he started as a delivery driver while attending college. Eventually, Gittrich worked his way up to become director of operations for a group of Dominos franchisees.

14.  After a few years, the first Toppers restaurant closed, but Gittrich had already opened a second location in Whitewater, Wisconsin. This became the new flagship store and Gittrich moved the company’s headquarters to Whitewater. After a few more years of small growth, Gittrich decided to start franchising the Toppers Pizza concept in 1997. The first franchised store opened in Eau Claire, Wisconsin.

15.  Although Toppers has been in operation for over 20 years, the company’s growth has been slow and steady. There is a mix of company-owned and franchised stores in Indiana, Illinois, Minnesota, North Carolina, Ohio, Kentucky, Nebraska, Michigan, Texas, Virginia, Wisconsin, and Wyoming. Toppers Pizza primarily targets areas near colleges and its stores typically stay open until 3 a.m.