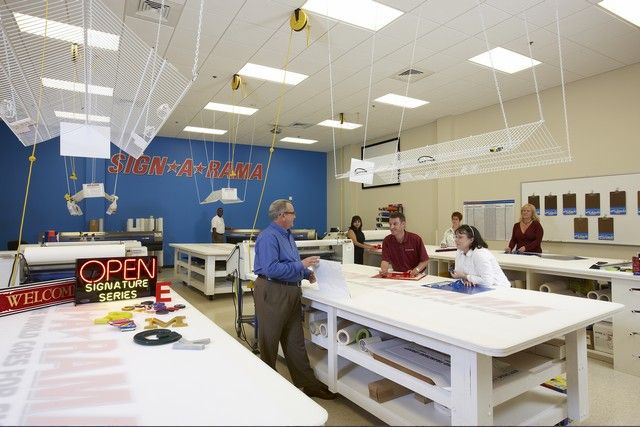 23 Things You Need to Know About the Signarama Franchise

1.  Near the end of July 2019, Signarama announced that marketing industry leader Kristin Gallucci had assumed the position of director of marketing. In her new position, Gallucci oversees all brand and digital strategy for the global sign and graphics company.

2.  Already a valued asset to the Signarama brand, Gallucci brings her extensive experience to the corporate team. Having spent over two decades leading strategic digital marketing, social media, influencer engagement, and analytics initiatives for several brands and agencies, she is well-equipped to spearhead Signarama’s marketing efforts.

4.  In 2015, Gallucci moved to the corporate side serving as chief marketing officer of a health company.


5.  Around the time of the press release, Gallucci was named a LinkedIn Top Voice for Marketing and Social Media and had been sourced in numerous industry publications including Adweek and Inc. Gallucci currently serves on the board of directors of the South Florida chapter of the American Marketing Association.

6.  Gallucci said, “It’s an honor to join such an experienced leadership team. I am incredibly excited to be the next director of marketing at such an iconic brand. I appreciate the opportunity to be part of the extraordinary things happening at this company and look forward to working with our franchise partners to share the Signarama brand experience. My role is unique; I have the opportunity to help entrepreneurs build their dream business while positioning the Signarama brand as a leader with consumers. As a marketer, it’s the best of both worlds.”

7.  A.J. Titus, president of Signarama, knows the importance of hard work and commitment to developing business relationships. As the third-generation family president for Signarama, Titus and the entire team are excited to welcome Gallucci.

8.  Titus added, “We have grown exponentially in the past few years, and Kristin’s experience will greatly help us continue to drive growth. We look forward to adding her energy, enthusiasm, and expertise to the Signarama family.”

9.  In mid-September 2019, Signarama announced that it had special plans for Sign Manufacturing Day on October 4. To celebrate the special day, Signarama invited select local high school and college students who are interested in the visual communications and graphics field, to visit the company’s West Palm Beach headquarters. There, the students got a rare, behind-the-scenes glimpse of sign making in real time, while shadowing industry experts.

10.  The International Sign Association, in partnership with the National Association of Manufacturers, established Sign Manufacturing Day in 2011 to encourage students to explore the exciting, diverse career opportunities the industry offers.

11.  According to A.J. Titus, president of Signarama, “Students attending our Sign Manufacturing Day event will have direct access to both manufacturers and educators. They’ll learn directly from admired experts about what the industry entails, plus make connections with others interested in the business.”

12.  Signarama is a member of United Franchise Group, a group of affiliated companies and brands based in West Palm Beach.

13.  Students had the unique opportunity to tour the corporate headquarters and learn not only about the organization, but also The Titus Center at Palm Beach Atlantic University, a local university which offers franchising education courses. The day’s offerings included a free lunch and learn event and was concluded with raffle giveaways.

16.  A.J. Titus, president of Signarama, said, “There are so many things that drew us to axe throwing – it’s fun, watched by families and is growing immensely in popularity. We have a passion for this growing sport, and we’ll be tuned in on December 8th with the rest of the world to catch all the action.”

17.  The 2019 Signarama World Axe Throwing Championship aired live on ESPN3 on December 8 at 3 p.m. EST. More than 115 competitors were whittled down to six finalists as they threw live and competed for a chance to win $15,000. The Championship re-aired on December 15 on ESPN2.

18.  What started as a mission to create a forum for axe throwing facilities to establish official rules and regulations, the World Axe Throwing League has grown to 20 countries, over 150 affiliates and more than 200 locations worldwide in just two short years. Today, the League is the largest professional association for axe throwing in the world.

19.  Evan Walters, commissioner of the World Axe Throwing League, added, “We’re excited to have Signarama be this year’s title sponsor. With their support, we’re confident that this will be the best axe throwing tournament and televised event produced by WATL.”

20.  Signarama was founded in 1986 by father and son team Roy and Ray Titus in Farmingdale, New York. The Tituses used their experience from owning and operating the Minuteman Press franchise, one of the largest printing franchises in the world, to develop the idea for Signarama. At the time, signage was difficult to buy and signage businesses were located in industrial facilities. The Tituses wanted to make the process of buying signage easier and more attractive by offering their services in a regular storefront.

21.  The first Signarama was a success and the Tituses began franchising the concept a year later in 1987. The second Signarama opened in North Palm Beach, Florida. Signarama continued to grow over the next few years and in 1988, Ray Titus was appointed president of the company. By 1990, Signarama had over 100 stores in operation. By the next decade, Signarama had 500 stores open.

22.  This growth continued into the 2010s, and Signarama now has locations around the world in countries including France, Australia, French Guiana, and many more. Signarama is still run by the Titus family, with Ray Titus serving as CEO and his son A.J. Titus serving as president.

Centers With Outside Sales Person