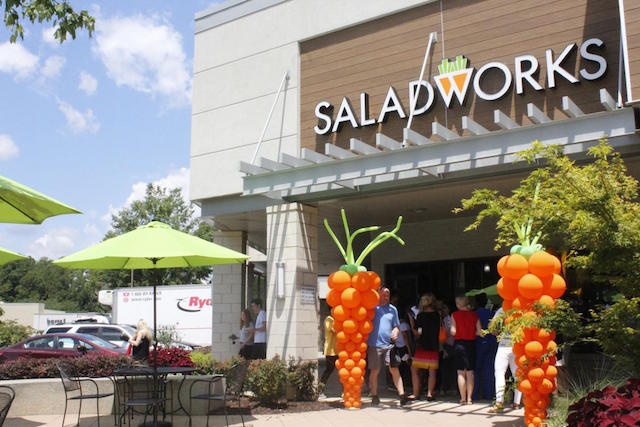 20 Things You Need to Know About the Saladworks Franchise

Kicks Off New Year with Opening of 100th Location


1.  In mid-January 2020, Saladworks celebrated the New Year with the opening in Howard Park, Maryland of its 100th restaurant. Guests attending the grand opening got a taste of Saladworks’ Year of Originality, empowering guests and team members to Be Original through key trends that influence its Millennial family guest – personalization, customization, self-expression, connection, and convenience. The first 100 guests in line also experienced a “WOW!” moment, receiving free Saladworks for a year.

2.  According to Kelly Roddy, CEO of Saladworks, “There is no better way to kick off the New Year than with a milestone celebrating our growing brand. As we enter into the new decade, we are laser focused on doubling our franchise presence to end the year with 200 locations, while also improving our guest experience so that our loyal fans can enjoy their original creations however they’d like, whether on the go or at home.”

3.  Mark Mears, chief marketing officer of Saladworks, added, “This year, we are focused on creating an environment that delivers a unique and original experience for every guest that walks through the door. We’re doing this by promoting creativity from within to deliver on originality by creating an environment where team members are encouraged to enhance the guest experience by letting their personalities shine through. Creating “WOW!” moments for guests is the cornerstone of the Be Original campaign.”

4.  Growing through franchising to meet the rapidly increasing demand for healthier meal options, Saladworks is on pace to double in size, with 200 locations planned to open by the end of 2020. The company is expanding its franchise unit count through both traditional restaurant locations and nontraditional venues such as airports, military bases, and universities. The brand is planning for expansion into new markets including Minnesota, California, Florida, Colorado, Rhode Island, Indiana, Ohio, and Arkansas.


5.  In mid-December 2019, Saladworks announced that it was continuing to open new locations with grocery store partners ShopRite and Fresh Grocer. Saladworks said that this decision was based on the success of the first two ShopRite locations the company had opened by the time of the announcement.

6.  In addition to a store in a Philadelphia-area Fresh Grocer, Saladworks has locations under development in Delaware, Maryland, and New York.

7.  Current locations in the greater Philadelphia area include Island Avenue ShopRite, Parkside Town Center and Wyncotte Fresh Grocer along with the Cheltenham location that opened in January 2020. Two new locations are opening in ShopRite stores in Roxborough and Fox Street.

8.  Saladworks’ successful pilot restaurant launched in a 170 to 250-square foot unit within the fresh produce department in a southwest Philadelphia ShopRite in 2018. The customer response was positive, assuring the healthy-eating brand that demand would be just as high at the upcoming locations. The expansion to more ShopRite locations is greatly beneficial to Saladworks as the brand expands within non-traditional settings such as airports, military bases, and office buildings.

9.  Eric Lavinder, vice president of development for Saladworks, said, “We have been absolutely thrilled by the results we’ve seen at the pilot location, and we’re confident that an expanded partnership with the ShopRite and Fresh Grocer brands will be hugely beneficial to both parties. This partnership will greatly expand brand awareness for Saladworks and also expand our footprint in non-traditional settings.”


10.  Some of the new ShopRite Saladworks locations will be found in Brown’s Super Stores Inc., a New Jersey-based company that has ShopRite and Fresh Grocer locations in the Delaware Valley area. Saladworks is currently in partnership with a number of other ShopRite and other major east coast grocery chain owners.

11.  Lavinder added, “Saladworks is on track for major franchise growth in 2020. We’re looking for hardworking, enthusiastic people who are passionate about providing excellent customer service. We have one of the most supportive franchise systems in the business, and we’re eager to add to our growing franchise family.”

12.  Near the end of November 2019, Saladworks announced that it had partnered with the United States Air Force to develop Saladworks restaurants on U.S. bases. Airmen, airwomen, and their families living on U.S. Air Force bases across the country will soon be able to enjoy Saladworks as part of the Air Force Services’ global initiative for enhanced food quality.

13.  According to Mike Baker, chief of strategy and innovation for the Air Force Services Center, “A couple of years ago, we embarked on a revamp of our military base food and beverage platform. What we have attempted to do with this new model is really modernize our food and beverage options. A younger, more socially aware demographic is in service now, with millennials looking for healthier, cleaner and more experiential food options than what we’ve traditionally provided in the past. After researching multiple brands, we knew Saladworks was the perfect addition.”

14.  Baker continued, “We want to provide a variety of high-quality menu options so our Airmen and Airwomen can make smarter choices in how they fuel their bodies, and Saladworks provides that capability perfectly. We wanted to partner with a restaurant where the citizens living on U.S. Airforce bases can dine and enjoy going out for a meal together. Saladworks really drives that point home.”

15.  Although real estate is still being chosen, Saladworks is currently eyeing possible development on the Air Force Academy campus, as well as the Buckley, Edwards, Davis-Monthan, and Luke Air Force Bases.

16.  Kelly Roddy, president of Saladworks, said, “As these five locations open and we begin fueling our nation’s heroes, we will be providing those living on the bases with easy access to healthy eating choices. Saladworks has something for everyone, no matter your dietary preference, and we are looking forward to bringing our quality ingredients to a new population of guests. One of the things that makes Saladworks so great is that our guests can customize and personalize their meals so they can create the perfect dining experience.”

17.  Saladworks was founded in 1986 by John Scardapane in the Cherry Hill Mall of Cherry Hill, New Jersey. Scardapane wanted to provide fresh, made-to-order, entrée-sized salads as an alternative to fast food for consumers on the go. Following the success of the first Saladworks, Scardapane opened additional stores in New Jersey and Pennsylvania over the next decade and a half.

18.  In 2001, Saladworks started franchising and growing nationally. Within a few years, Saladworks had grown to 88 locations across eight states. As domestic growth continued, Saladworks opened its first international stores in 2013.

19.  Two years later, Saladworks filed a Chapter 11 bankruptcy petition and listed Commerce Bank and Metro Bank founder Vernon Hill as a major creditor. Saladworks was saved from complete closure after it was acquired by Centre Lane Partners in June 2015. As part of the acquisition, Scardapane stepped down as the company’s longtime CEO.