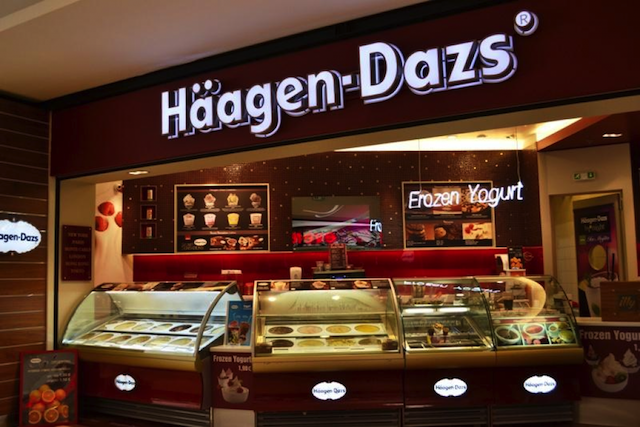 2.  The service will use web-based geolocation APIs pinpointed to customers’ exact locations. This means that by simply typing in their ice cream order via the Facebook Messenger app, the app will be able to locate and facilitate a delivery of Rocky Road to the customer, even if that customer is on the go or in a public place. After an order is placed, a Häagen-Dazs team member is dispatched and customers will be able to track their drivers’ whereabouts in real time, much like ride-hailing services.

3.  According to Hä​agen-Dazs UK brand manager Samuel Horner, “When orders are being prepared for delivery, product is placed in portable freezer bags for the delivery teams to take to the consumer, ensuring the ice cream arrives at its best.” The Hä​agen-Dazs team at Russell Square will be working out of a “temperature-controlled delivery van.”

4.  Since Hä​agen-Dazs NOW has built real-time location-based technology into its food delivery service, the company recognizes that a few bugs might need to be worked out during the testing phase. Horner said that the company is encouraging customer feedback, especially since there are numerous complications that could arise from being able to order ice cream from anywhere.

5.  He said, “As with any trial, we’re looking to get feedback from consumers on how they perceive the service and how we can improve on our offering. This will help to guide our technology mix and use of artificial intelligence (e.g. chat bots, drones, et cetera) moving forward.”


6.  If the trial in London goes well, Hä​agen-Dazs could take its new on-demand ice cream delivery service overseas to other markets like the United States. According to Horner, “The Russell Square trial will help inform future roll out plans. Understandably, we need to stay pretty tight lipped about expansion plans at this stage. That said, summer events involving large gatherings of people in one location are certainly on our radar. Beyond that, the possibilities are limitless.”

7.  Horner added, “Depending on how this goes, we will evaluate how it could fit into our future consumer plans in the UK and beyond.”

9.  According to Jaiven, “The Spirits Collection was expertly crafted to offer new, extraordinary ways to indulge. Each flavor is perfect to pair with your favorite cocktail, elevate a boozy float or simply enjoy on its own.” Jaiven added that although Häagen-Dazs has had spirited flavors before, this was the first
collection of alcohol-infused ice creams for the brand.


10.  The Spirits Collection ice creams only contain 0.5 percent alcohol by volume, which is the same amount found in non-alcoholic beer. This means that anyone can purchase the ice creams without any concerns.

11.  Beginning on March 1, two Spirits flavors – Irish Cream Brownie and Vanilla Bean Bourbon Truffle – became available at Häagen-Dazs Shops nationwide and served in cups, cones, sundaes, or milkshakes. Jaiven said she expects the Irish Cream Brownie to be one of the most sought-after flavors. She added, “It was one of the most popular bring-back requests from our consumers. It’s a nod (to the old version), but we’ve also enhanced it.”

12.  Häagen-Dazs ice cream was founded in 1961 by Reuben Mattus in the Bronx, New York. Mattus started with only three flavors: vanilla, chocolate, and coffee. Despite its Danish-sounding name, Mattus actually completely made up “Häagen-Dazs.” According to Mattus’ daughter, Doris Hurley, her father “sat at the kitchen table for hours saying nonsensical words until he came up with a combination he liked.” Mattus wanted the name of his ice cream to be unique and original.

13.  After about a decade of success selling Häagen-Dazs, Doris Hurley decided to open a Häagen-Dazs Shop in Brooklyn Heights, New York in 1976. Because of Häagen-Dazs’ built-in brand recognition, the shop was an immediate success. Hurley started franchising the Häagen-Dazs Shop concept a year later and the chain continued to grow over the next few decades. Through the years, Häagen-Dazs has expanded its offerings and there are now shops in over 50 countries.