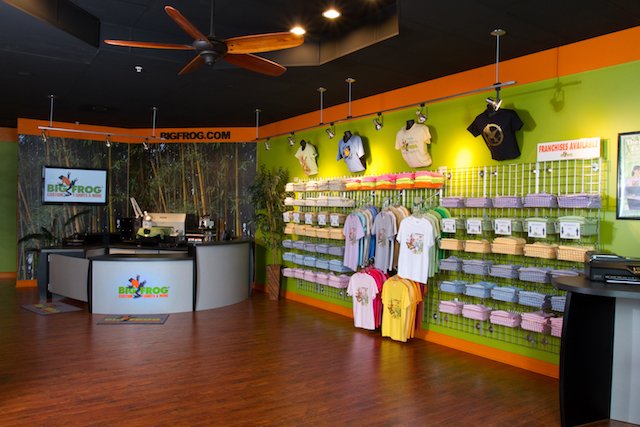 1.  In late July 2019, Big Frog Custom T-Shirts & More said that it had experienced massive development throughout the first half of 2019. The franchise has now seen seven years of double-digit growth in unit revenue and nine years of double-digit growth in system-wide revenue, all while continuing to expand its franchise system in new markets nationwide.

2.  Celebrating its 10th year of franchising, Big Frog witnessed a 15 percent increase in system-wide gross revenue in the first half of this year. Additionally, the company awarded four franchise agreements and plans to open its 100th store in the fall of 2019 in New York.

3.  This ongoing success comes at a time when Big Frog is making exciting internal changes. Earlier this year, Big Frog announced the appointment of Dr. Tina Bacon-DeFrece as CEO of the company. As CEO, Bacon-DeFrece will spearhead the brand’s franchise operations system and act as a liaison between Big Frog’s franchise owners and board leaders, ensuring the profitability and success of each franchised location.

4.  Bacon-DeFrece said, “After hitting our 100-unit mark, the next 10 years are going to be a whole different journey for Big Frog. There are new technologies that we will need to implement as well as new prospective franchisees with different backgrounds that we will need to identify and attract. I have been honored to be a part of Big Frog’s story, acting as a core member of our founding team and moving all the way up to President of the Brand. Now as CEO, I am excited to tackle the new challenges Big Frog will face in the coming years and lead the way towards the brand’s continued success.”

5.  Over the next five to eight years, Big Frog Custom T-Shirts & More is planning a national development campaign with the goal of awarding around 300 franchises throughout the domestic United States. The brand also plans to incorporate platforms to improve the planning, marketing, and operational functions for franchise owners, all while maintaining Big Frog’s well-recognized owner-operator and community-focused business model.

6.  At the beginning of September 2018, Big Frog Custom T-Shirts & More announced development plans to add 10 stores, through strategic franchise partnerships, across the Chicagoland area over the next three years.

7.  As part of a refined Midwest franchise development strategy, the brand exhibited at the first annual Franchise Expo Midwest that debuted at the Donald E. Stephens Convention Center in Rosemont from September 14-15. Becoming the epicenter of small business opportunities, eager entrepreneurs had the chance to explore the world of franchising, meet with executives from the Big Frog leadership team, and converse with Illinois-based Big Frog franchisees.

8.  As the fast-growing and award-winning concept has swiftly expanded to more than 100 awarded locations in 24 states, Big Frog is now set to further develop throughout Illinois. There are currently three locations open throughout the state – Naperville, Shorewood, and Edwardsville. The Naperville location was the first to debut in the state and celebrated its six-year anniversary this November 2019. It has seen consistent growth, most recently experiencing 9.7 percent year-over-year sales increase.

9.  According to Lori Jozwiak, Big Frog franchisee, “As a one-of-a-kind service provider, our location has received an incredible response from the Naperville community. When looking for business ownership opportunities after my children were older, I wanted to find something that would allow me freedom and flexibility while also making an impact in my community. Big Frog proved to be the perfect venture.”

10.  Jozwiak added, “With an exceptional team, superior customer service, and a community filled with schools, charities, and civic organizations, we’ve found tremendous success. The brick-and-mortar location allows us to interact with our customers in a way they can’t do online. Additionally, with no minimum quantity order requirements, we can service a wide variety of customers whether it be for a school event, a huge company outing, or a small personalized gift.”

11.  With a positive business climate, open real estate, and a network of many successful franchisees, Big Frog is seeking qualified franchise partners to open in key markets throughout the state including Batavia, Downers Grove, Orland Park, Schaumburg, Des Plaines, Wheaton, Elgin, Evanston, Arlington Heights, and Wheeling. There is also opportunity to develop in Rockford, Springfield, Joliet, Peoria, and Waukegan.

12.  Tina Bacon-DeFrece, CEO of Big Frog, said, “Chicago and its surrounding cities are great communities with well-established, leading business hubs. With a thriving $671-billion-dollar economy, it is an ideal region for franchise expansion and entrepreneurship. We are eager to seek out and train enthusiastic local residents who want to bring Big Frog into their communities, and we will be hosting discovery meetings with prospective franchisees at an open house at our Naperville location on Monday, September 17.”

14.  Bean had met DeFrece in 1997 when he came to work for Ocean Optics and the two, along with
DeFrece’s wife, Tina Bacon-DeFrece, decided to become business partners and sell custom t-shirts. In 2009, Bean and the DeFreces began franchising the Big Frog concept.

15.  Big Frog makes designing and printing custom t-shirts easy and accessible to anyone. The brand offers a wide array of t-shirt colors, fonts, images, and customers can even work with a Big Frog t-shirt designer for free. Today, Big Frog Custom T-Shirts & More has locations around the United States.