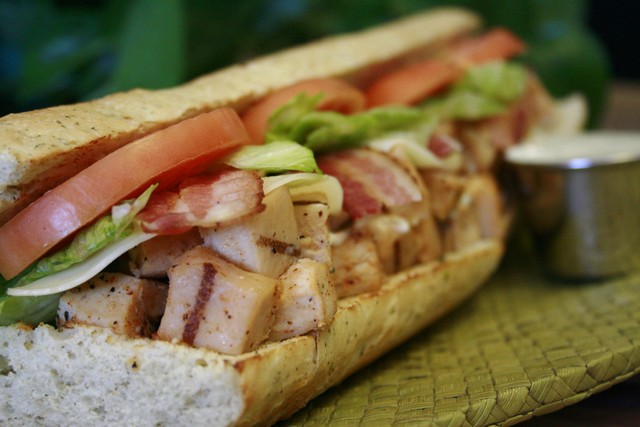 26 Things You Need to Know About the Cheba Hut Franchise

1.  In late May 2019, Cheba Hut celebrated its 25th store milestone with the opening of its Las Vegas restaurant. At the time of the announcement, Cheba Hut’s breakdown of units was 11 company-owned and 14 franchised.

2.  In 2015, Cheba Hut put the brakes on franchising. Leadership realized in order for the brand to succeed and grow successfully, a complete review of operations and processes needed to take place. Over the last three years, Cheba Hut focused on improving its company stores to create a viable model that will be successful for franchisees to imitate, according to COO Marc Torres. Cheba Hut grew from six corporate locations to 11 during that time period. It had to walk the walk before it could ask others to.

3.  As acceptance around the legalization of marijuana grows, Cheba Hut sees fresh opportunity. The brand believes it can capitalize on the “Green Wave,” Torres says. In areas where marijuana is now legal, Cheba Hut partners with dispensaries by leaving menus in their waiting rooms as a form of cross promotion.

4.  Torres added, “We own that. That’s something that we’re proud of. We’ve been doing business since 1998, way before legalization was even being talked about.” Torres said interest in the brand is spiking, from consumers as well as operators hoping to join Cheba Hut’s growth. The brand has turned down as many potential franchisees as it’s accepted, he adds. Torres went on to say, “Nobody’s doing what we’re doing. We really do feel like we’re in our own lane.”

5.  After doubling the footprint of company restaurants, Cheba Hut felt it was time to explore franchising again in 2018. Traditionally, Cheba Hut focused on markets supported by college towns. Its new growth chart, however, brings the brand to areas populated by younger consumers, like Atlanta, which aren’t tied just to campus life. Cheba Hut’s customers generally fit in the 18-34-year-old demographic.

6.  Florida is another target where Torres sees massive potential. With the chill, beach-y vibe, the concept works in places like St. Augustine, where there’s not a major college crowd. But there’s still potential to open near campuses across the state.

7.  According to Torres, “We feel like it goes extremely well in those types of markets where you’re typically looking for something more than a sandwich and go. You want a cool place, you want someplace that adds to your trip. It adds to your experience wherever you’re at, whether it’s St. Augustine or Miami beach, we feel like Cheba goes really well with, especially if you’re on vacation.”

8.  In 2018, Cheba Hut brought on five new franchise partners, each with three-store deals, which is the current standard. Torres says the chain will gradually increase the number of partners they bring on each year. By the end of 2019, Cheba Hut will welcome six to eight new franchises.

9.  Even though franchising is ramping up, company growth is progressing, too. Cheba Hut is on track to open five to eight units per year, Torres says, and expects to continue to do so over the next few years. Corporate expansion helps spread brand awareness and, in turn, supports franchise growth in new and existing markets. “The idea behind that is we feel like the company stores keep us really close to our customers and to our operations,” Torres says. “We’re able to really use the best practices from within our company stores and get those out to the franchise community.”

10.  Torres believes the brand will hit 35 units by 2020, and the 50-store milestone by the end of next year. If all goes accordingly, the company could double its footprint in less than two years. But Cheba Hut’s leadership isn’t going to force that directive. So far, growth has been organic and Torres says that will continue.

12.  The work over the past few years set the company up to feel comfortable about this rate of expansion. Unlike some of its competitors, Torres says, Cheba Hut’s focus is not just on the menu, but the overall experience a guest has when dining at the restaurant. It is not a place to just go grab a sandwich and leave – it’s a destination to enjoy something different, maybe a cocktail, and hang out with friends. “People come here to hangout, they bring their friends, they bring their families,” Torres says. “That’s something that, again, nobody’s hitting on, especially in the sandwich segment.”

13.  Even though the 18-34-year-old demographic makes up a majority of its customers, Torres says Cheba Hut meshes well with blue-collar workers as well. They are a little older, have disposable income, and feel like they’re reliving a younger age when they’re at the restaurant. Along with giving customers an experience, Cheba Hut also attracts with price. Customers typically get out of the door with a sandwich and a beer or cocktail for under $20.

14.  “People sometimes have the wrong idea about who we are and what we do,” Torres says. “Just come on in. Come on in, have a sandwich. Enjoy it. Cheba is not for everybody, but the people that get it are diehard fans and those are the people that we focus on serving every day.”

Goes After Quiznos for Infringing on Brand Identity

15.  In late June 2019, Cheba Hut made national news when the brand heatedly went after Quiznos after the latter unveiled a new Magic Mushroom Melt, a limited-time vegetarian mushroom sandwich on “tie-dyed white bread,” only available at a single location in Denver. For Scott Jennings, founder and CEO of Cheba Hut, Quiznos’ sandwich was a little too similar to Cheba Hut’s longtime Magic Mushroom toasted sub.

16.  According to Jennings, “It’s our exact sandwich, it’s a great sandwich we had, and we had some confusion of people calling in asking if we we’re doing this promo. So we had to do something.” So with the help of DrummLaw, Jennings sent over a tersely worded cease-and-desist letter that alleged trademark infringement the day before the one-day promotion was to be held.

17.  “Cheba Hut demands that you immediately cease and desist from any planned and/or existing use of ‘Magic Mushroom Melt’ or any similarly confusing words or logos, including but not limited to the Infringing Use. Cheba Hut also demands a public apology,” read the letter.

18.  While the cease and desist letter was serious, Jennings decided to deliver the letter by a stripper gram wearing a police uniform. Jennings said he and the company were able to have some fun with it, but the promotion was still irksome when brands attempt to co-opt the stoner-culture branding at the core of Cheba Hut.

19.  “We’ve got a lot of people jumping on the old bandwagon here,” Jennings told Franchise Times. “That’s what irks me, this is not a niche for us. We were proving a point back in the day – it wasn’t a hook, it was the bonus. I liked to get that out there, we’re serious about our food and our culture.”

20.  Quiznos responded in a similar fashion with a pun-filled letter delivered by a singing sandwich. Also in the letter, Quiznos promised to donate all proceeds from the single-day release of the sandwich to the Food Bank of the Rockies in Denver.

21.  Jennings, who dialed down his initial anger, said, “They kind of clapped back with a singing sandwich guy. They came over to our restaurant, so it was a little bit of fun back and forth.” Jennings added that since the sandwich was only a one-day event, he decided not to pursue real legal action. But he said he’s not going to quietly watch brands jump on the marijuana subculture without a jab here and there, legally if need be.

22.  On a final note, Jennings said, “My ideal outcome would be just to put people on notice. I know we can’t lock down the green wave, everyone is going to get on. But we’re putting people on notice that if you’re a faker or a trend jumper, we’ll put you on notice and we’ll poke you. And we are serious when it comes to our business model, so if you come after our name or how we do a sandwich, we’ll clap back.”

23.  Cheba Hut was founded in 1998 by Scott Jennings in Tempe, Arizona. Jennings had been a “foodie” his entire life and worked various restaurant jobs while attending college and decided he wanted to have a career in the industry. From the start, Jennings wanted to do something different and he noticed that there was a severely underserved market for late night deliveries.

24.  Additionally, Jennings realized that college students enjoyed smoking marijuana and decided he would appeal to them by creating a cannabis-themed sub shop. Besides the gimmick of Cheba Hut “Toasted” Subs, Jennings made sure that the sandwiches were better quality than those found at a typical fast food sandwich shop.

25.  The entire menu at Cheba Hut reflects the brand’s cannabis theme and the company even sells branded merchandise that leans into this theme. Cheba Hut has developed a cult following since it first opened and there are now locations across seven states, mainly in the Southwest.