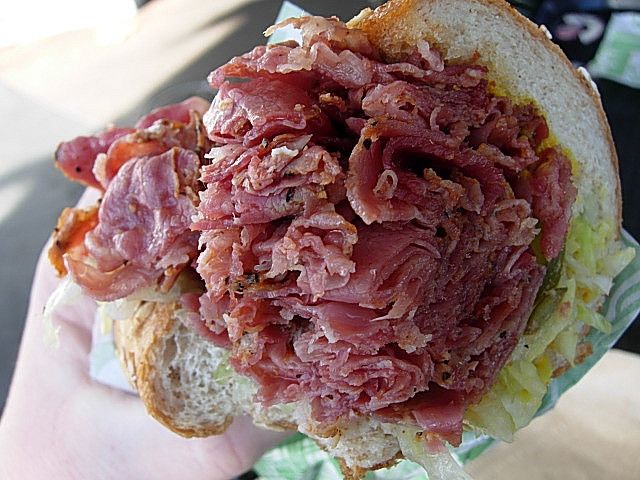 21 Things You Need to Know About the Togo’s Franchise

1.  In late April 2018, Togo’s, just a few years shy of its 50th birthday, unveiled a complete brand refresh. The changes include a new anthem, logo, packaging, store design, and even a fresh signature menu item, the Pretzelrami. The Pretzelrami features more than a quarter pound of pastrami piled high on a soft pretzel roll, and loaded with tangy yellow mustard and crisp dill pickles.

2.  Glenn Lunde, president of Togo’s, said, “Togo’s has been pretty quiet the last few years, but we’re thrilled to begin sharing our many exciting brand improvements with existing and new guests. Our commitment is to be relentlessly ‘True to the Sandwich’ in everything we do, which means staying laser focused on what matters most to our guests, and that’s bold flavors, premium ingredients, and generous portions.”

3.  In early March 2018, the brand brought on industry veteran Corey Wilde, who clocked time at Nathan’s and Bruster’s as chief development officer, in an effort to propel Togo’s expansion. He’s going to do so now with a completely revamped image.

4.  Togo’s said the changes are meant to represent its storied culture “and what makes Togo’s so unique from other sandwich concepts.” An updated logo, new employee uniforms, and vibrant new packaging will be immediately visible for guests. Togo’s added that its stores are undergoing a facelift, which will roll out gradually, as well as define all new units moving forward.

5.  Togo’s refreshed anthem is called “True to the Sandwich.” The chain is announcing the changes through a marketing campaign developed by Siltanen & Partners of Los Angeles labeled “How Far Would You Go for a Togo?” It illustrates the extreme and humorous lengths that people will go to get their favorite sandwiches, Togo’s said.

6.  Wilde told QSR Magazine that Togo’s was focusing on giving the brand a consistent look and feel across the coast, and that the brand had remained stagnant for about three decades. He estimated it would grow about 20-30 store locations per year over the next several years, including non-traditional growth in C-stores.

7.  He added, “Togo’s presents a tremendous opportunity for potential franchisees looking to expand their portfolio and grow with a proven brand that has an extremely loyal following. Our existing franchise partners are very enthusiastic about the brand refresh and are confident that our fresh approach will strongly resonate with new guests, while appreciated by longtime fans who have loved Togo’s since their very first bite.”

8.  Beginning in March 2019, Togo’s store of the future, named Togo’s 3.0, started gaining momentum thanks to the completion of both physical and operational renovations at Togo’s Emeryville, Fremont, and San Jose, California stores. Togo’s completely remodeled one corporate and two franchise-owned locations to dramatically improve the overall guest experience with faster speed of service and a more contemporary dining environment.

9.  Farid Biglari, senior director of operations services for Togo’s, said, “We wanted a store that reflected our nearly 50 years of leadership in the premium sandwich category. To go with the stores’ fresh look, we also wanted to increase speed of service for dine-in, takeout, and delivery convenience, so we created a far more efficient kitchen system that includes state-of-the-art equipment along with self-service kiosks.”

10.  Glenn Lunde, CEO of Togo’s, added, “We’ve given the best sandwich, the best environment for our people and our guests.” With a clear view of the kitchen, guests can also see the efficiency of the newly-reorganized prep system. The sandwich-making process now follows a speed-line style in which a guest can order at either the self-service kiosk or talk to a cashier to place an order. Lunde said that this style of sandwich making is both faster and more accurate.

11.  He continued, “The back of house operations are simplified, meaning it’s easier and faster for consumers to receive their order. We’ve also simplified the ordering process and are more accessible to our customers through our third-party delivery partnership with DoorDash and other partners.”

12.  The rebranding initiatives, which were started in 2018, have yielded both customer satisfaction and strong sales growth. Togo’s Emeryville location, the first to be updated, has been open for a little over two months. During this time, the Emeryville Togo’s has seen a 15% increase in same-store sales. While it is too soon to identify the precise sales climb for both the Fremont and San Jose stores, Lunde stated that those locations’ initial sales numbers are up as well with no marketing efforts at this point.

13.  In addition to a more streamlined kitchen system, the 3.0 stores now utilize more white lighting sources throughout the restaurant, plus brighter flooring to evoke cleanliness and a welcoming atmosphere. The walls sport a coat of crisp white paint with bright orange accents. Pops of bright blue tile break up the orange patterning along the wall and the elevated colors are absolutely striking to the eye.

14.  Togo’s newest Santa Clara store, which has been built from the ground up, opened in mid-May and the brand is eager to see how the fresh design will be received. Lunde stated that the four pending new stores will reflect the rebranding initiative as well. With three locations successfully reopened, Togo’s seeks to overhaul seven to eight more locations this year. The company has another 18 stores slated for rebranding in 2020 and will keep a close eye on sales growth and social media engagement.

15.  In mid-July 2019, Togo’s introduced three hot and melty chicken sandwiches to its menu. Togo’s continues to deliver on its brand promise to be True to the Sandwich with the introduction of the new tasty Hot Chicken Trio. The chicken sandwiches are the follow-up to the brand’s successful hot pretzel sandwich introduction earlier this year.

16.  The three new hot chicken sandwiches rolled out to the entire Togo’s system on July 10. The Hot Chicken Trio features a powerhouse of flavors and includes:

17.  According to Glenn Lunde, CEO of Togo’s, “We are excited to meet guest demand with the arrival of our new hot chicken sandwiches. Togo’s has always prided itself on exceptional made-to-order sandwiches that use only the freshest ingredients and we are thrilled to be able to innovate with new hot sandwich options while staying ‘true to the sandwich’ and maintaining the quality that made us famous.”

18.  Togo’s was founded in 1971 when Mike Cobler, who was a student at San Jose State University at the time, used his savings to purchase a small sandwich shop. The shop had initially been opened in 1967 by Gordon Reid and the sign out front read “Sandwiches To Go” with To Go being on the second line. This inspired Cobler to rename the shop Togo’s.

19.  Cobler set out to make the meatiest and best quality sandwiches that he could and Togo’s was immediately popular with lines forming out the door. Following the success of the first Togo’s, Cobler opened additional locations in the area, as well as in Oregon. Cobler began franchising the Togo’s concept in 1977.

20.  Over the next few decades, Togo’s continued to grow and in 1997, the chain was acquired by Dunkin’ Brands. By 2001, Togo’s had grown to more than 350 locations across the United States and in 2007, the company was sold to Mainsail Partners, a San Francisco-based private equity firm, in partnership with Tony Gioia, a former president of Baskin-Robbins. Mainsail retained ownership of Togo’s for a few years before the company was acquired by Nimes Capital in December 2015.