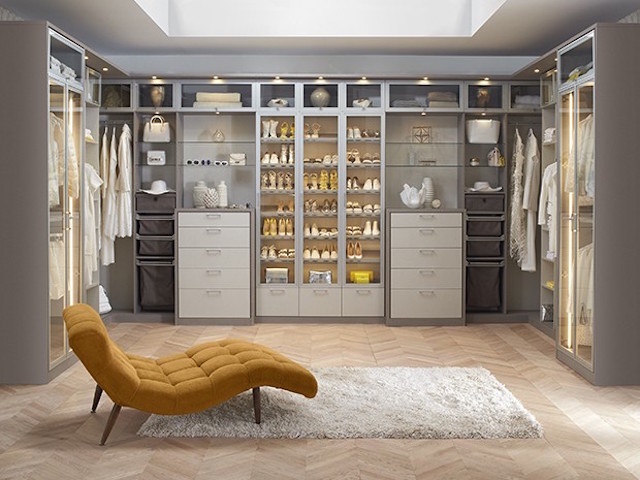 25 Things You Need to Know About the California Closets Franchise

1.  California Closets began rolling out its redesigned “Showroom 2.0” in its stores in January 2018. For years, California Closets has been on a mission to create a consistent look for its showrooms located across the country. For most of the retailer’s 41 years of operation, its stores have sported very different looks, in part because approximately two thirds of the locations are franchises rather than corporate-owned stores.

2.  The company’s other big brick-and-mortar challenge has been finding enough square footage in its stores to show off multiple examples of the retailer’s creative, customized closet designs. Larger showrooms can house as many as 10 displays, but the retailer creates customized storage spaces for bedrooms, pantries, and garages, so there’s a constant fight for space.

3.  According to Lisa Gold, director of showroom design for California Closets, the company has deployed Elo 46-inch endless aisle kiosks in its redesigned “Showroom 2.0” stores to show the depth of what the brand has to offer. The interactive touchscreens resemble drafting tables and have been instrumental in the positive results seen at these locations.

4.  California Closets aims to have 90% of all its stores, both franchise and corporate-owned, upgraded to the consistent 2.0 look by the end of 2019, with the rest completed in 2020. Gold said, “Our ‘close rate’ among customers that come into the 2.0 stores has been higher, and during the first six months of their operation, job sizes [average order values] increased.”

5.  While California Closets’ in-store designers had anticipated using the kiosks alongside shoppers, the application’s interactivity and depth of product information enables customers to use them without assistance. “We were a little surprised at how open the customer was to ‘playing’ with the technology,” said Gold. “They wanted to discover on their own and then ask questions of the designers if they have them. It opened up an alternative way of learning about us.”


6.  The application provides detailed product information, plus educational content that highlights California Closets’ commitment to sustainability and its manufacturing processes. Other functionalities include designing to a specific budget, and the ability of shoppers to “favorite” a design they like or feel inspired by.

7.  “We’re capturing leads and information about what they want, but we’re also ensuring that they don’t have to repeat their story,” during a future visit to a showroom, said Gold. Additionally, shoppers can use the touchscreen interface to schedule appointments with designers, either for in-store consultations or in-home visits.

8.  According to Gold, “Our designers call this a lifesaver. If a customer comes into a showroom and doesn’t see what they’re looking for, they can bring them over to the touchscreen and it shows them beautiful images. Previously designers had to show pictures in the plastic sleeve of a portfolio notebook, and there are just times when that’s not enough to show these images in a way that really inspires people, that ‘wow’ moment. It’s an amazing demonstration of what we can do.”

9.  In 2017, California Closets began working with CreativeRealities and Elo to develop the kiosks. Angela Nicholson, director of digital marketing for California Closets, said, “They offered a solution that was cost-efficient and had the quality we were looking for — the Elo touchscreen and the customized base. That spoke to the designer aspect of the solution.”

10.  California Closets is still planning refinements and additions to the kiosk experience. Gold added, “We have ‘before and after’ shots on our web site — images of a chaotic room before, and what we can do to create calm in a person’s house. We would like to bring that thought into the newer touchscreens, because we think it will be more fun for the customer. That will be the 2.0 version of Showroom 2.0.”

11.  While the kiosk does have self-service functionalities, California Closets still stresses the role of its designers. “We’re steeped in service to the customer, and our foundation is to be a design service,” said Gold. However, the endless aisle and exploratory elements of the kiosk are delivering benefits that could increase customer lifetime value.

12.  Gold added, “People at the touchscreens might be looking at just a reach-in closet, but then they start to look at a complete entertainment center. They’ll often think beyond what they originally came in for, for other spaces in the house. Hopefully they will come back after their immediate needs are met, and we will have created a lifelong customer.”

14.  Charlie Chase, president and CEO of FirstService Brands, said, “These two acquisitions provide key market footholds in the attractive and growing Mid-Atlantic region. Both operations will benefit from the migration of production into our eastern centralized manufacturing facility in Grand Rapids, Michigan and ongoing investments to increase capacity.”

15.  According to Bill Barton, president and CEO of California Closets, “We are delighted to add two strong-performing operations, which have been led by long-standing franchise owners, to our rapidly growing company-owned platform. With the addition of the Baltimore franchise, which is adjacent to our existing Washington, D.C. operation, we are well-positioned to capitalize on our significant market opportunity. The South New Jersey franchise also provides a sizable geographic footprint within close proximity to the New York metropolitan area, the largest U.S. market.”

16.  In late March 2019, California Closets announced an e-commerce platform with California Closets Essentials, a curated collection of best-in-class closet accessories designed to create a more comprehensive brand experience for customers. Featuring an initial rollout of eight product categories and over 150 items, the private-label offering is assembled for superior performance and style, allowing the brand to become a full-service organizational resource.

17.  Bill Barton, CEO of California Closets, said, “This is an exciting and important opportunity for our brand as we look to extend and deepen our customer relationships, and remain an industry-leading source for custom closet solutions.”

19.   Jill LaRue, senior vice president and chief merchandising officer of California Closets, added, “This is an exciting and important opportunity for our brand as we look to extend and deepen our customer relationships, and remain an industry-leading source for custom closet solutions.”

20.  California Closets was founded in 1978 by Neil Balter – who was still in his first year of college and only 18 years old – in Woodland Hills, California. Balter had installed shelves in his friend’s closet and realized that he could turn that service into a business. For the next two years, Balter did minor closet renovations as part-time work while he continued to attend school.

23.  Initially, things were moving slowly, but Balter caught a lucky break when he boarded an airplane and sat next to Wall Street Journal reporter Jennifer Bingham Hull. During the plane ride, Balter discussed California Closets with Hull and, as result, his company became the WSJ’s featured small business on March 19, 1984. Over the next decade, California Closets grew rapidly and Balter and the company were featured on Good Morning America, Today, Geraldo Rivera, and the Oprah Winfrey show.