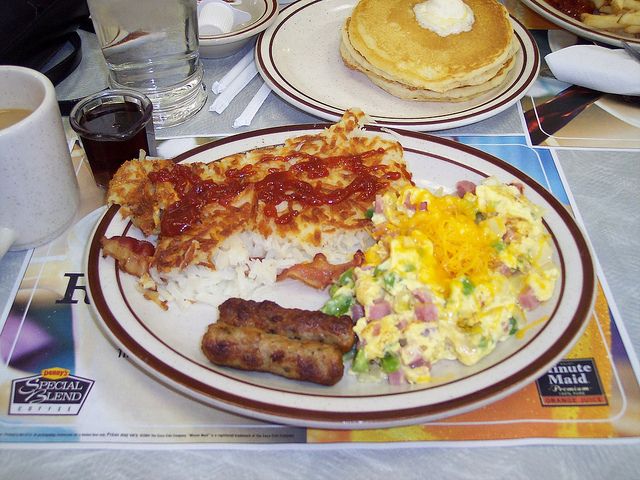 19 Things You Need to Know About the Denny’s Franchise


1.  At the beginning of May 2019, Denny’s launched its nationwide “See You at Denny’s” campaign to invite consumers back to its restaurants to experience improvements the brand has brought to life. As part of its brand revitalization over the past few years, Denny’s remodeled over 80% of its restaurants to be more modern and comfortable and overhauled a large majority of its menu to meet shifting consumer tastes.

2.  The new “See You at Denny’s” tagline is an invitation for customers to try out the new Denny’s, and with dedicated spots for multiple multicultural audiences, the campaign further solidifies Denny’s position as America’s Diner and its commitment to providing an inclusive and welcoming dining experience.

3.  John Dillon, Denny’s chief brand officer, said, “In a coordinated effort with our franchise partners over the last several years, we’ve invested in higher quality ingredients, more comfortable dining spaces and maintained a focus on impactful diversity, equality and inclusion initiatives. We have long been the place where people come together. More than an ad campaign, ‘See You at Denny’s’ is a sign of our continued commitment across the organization to create a place where the modern American family can come together and connect over a delicious meal.”

4.  To bring the “See You at Denny’s” campaign to life, Denny’s tapped agencies EP+Co, Conill, and Fluent360 to create several spots. The creative was inspired by the diverse demographics of Denny’s guests and captures the inclusive gatherings of families and friends Denny’s is known for across America.

5.  The spots include dedicated commercials speaking directly to African-American and Hispanic guests. The advertisements will run on national TV as well as various digital and social platforms including Hulu, YouTube, Vevo, Facebook, and Instagram.


6.  According to John Miller, Denny’s president and CEO, “The revitalization of Denny’s celebrates years of hard work from everyone in our organization to further strengthen our place as America’s Diner. With new training programs emphasizing our obsession with customer service, new technology like Denny’s on Demand allowing us to reach guests at their convenience and an unwavering commitment to feeding everyone delicious food, Denny’s continues to raise the bar to delight our customers. We can’t wait to see you.”

7.  In mid-March 2019, Denny’s announced a partnership with Earvin “Magic” Johnson. With Johnson’s support, Denny’s has created an online and multifaceted experiential program to accompany their Breakthrough Leadership Training and Development Program. Denny’s focus is on creating and developing careers. Johnson’s history as a business leader, entrepreneur, athlete, and philanthropist, complements Denny’s commitment to building individuals and strong teams.

8.  John Dillon, senior vice president and chief brand officer for Denny’s, said, “Partnering with Magic is such a natural fit for us. His business acumen and commitment to building diverse workforces aligns well with Denny’s efforts and our passion for supporting the communities we serve. Over the coming months, Denny’s looks forward to visiting several communities in which we will provide job opportunities and information about careers in the hospitality industry. Johnson’s assistance in our efforts will help us reach a broad audience to share skills and insights that will help them grow personally and professionally.”


10.  According to Johnson, “Denny’s is doing this right. Having spent time with the senior leadership team and having witnessed firsthand their commitment to recruiting local talent, training their employees, and making a positive impact in their local communities, it’s obvious they are approaching their goals the right way. Magic Johnson Enterprises has always been focused on developing programs that create jobs and careers in the areas in which we invest. Over the coming months, I look forward to participating in Denny’s recruiting and training efforts and I am proud to support their team.”

11.  Chris Bode, Denny’s chief operating officer, added, “Denny’s success and our ability to achieve breakthrough results is directly dependent upon the effectiveness of our leaders and team members. We believe there is a leader inside of everyone. We have had the pleasure of working with Magic Johnson and his Foundation for the past eight years, and we understand and support his commitment to youth and education. We are privileged to have this opportunity to continue working together to recruit and build a best-in-class workforce that will help us foster an environment and culture that will sustain our business for years to come.”

12.  In addition to launching Denny’s new recruiting and leadership training program, Denny’s teamed up with Magic Johnson earlier in 2019 to develop a regional specialized menu in Southern California. These specialty items come with tips demonstrating healthy alternatives for classic meals.

13.  Denny’s was founded as Danny’s Donuts in 1953 by Harold Butler and Richard Jezak in Lakewood, California. The Danny’s Donuts concept was a success, and within a few years there were a few locations around California. In 1955, Jezak left the company, leaving Butler as the chain’s sole operator. Around this time, Butler decided to change the concept of the growing business from a donut shop into a coffee shop that stayed open for 24 hours.

16.  In 1987, Denny’s was acquired by Trans World Corporation (TW Corporation), and the company’s headquarters was moved from Irvine, California to Spartanburg, South Carolina in the early 1990s. In 1992, private equity firm Kohlberg Kravis Roberts acquired a 47% interest in TW Corporation, later known as The Flagstar Companies, and encouraged the company to sell non-core businesses. Operation of Denny’s became the core business of The Flagstar Companies that it ended up changing its name to Denny’s Corporation.

17.  In 1994, as Denny’s continued to expand, the company began renovating its stores. Denny’s
growth continued into the next two decades and in 2010, Denny’s experienced a major expansion when the company partnered with Pilot Flying J to open restaurants inside Flying J-branded truck stop locations.

18.  Today, there are Denny’s restaurants in all 50 U.S. states, Puerto Rico, Guam, Chile, Canada, Mexico, Costa Rica, New Zealand, and many other countries.