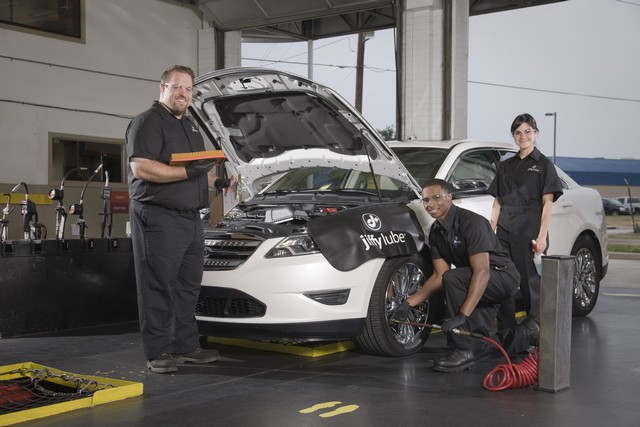 14 Things You Need to Know About the Jiffy Lube Franchise

1.  At the end of February 2019, Jiffy Lube announced that it was accelerating its growth in 2019, expanding into new markets and communities. Based on current development plans, Jiffy Lube will open more new stores this year than the brand has opened in any given year over the past decade.

2.  At the time of the announcement, ten new locations were slated to open in the first quarter of this year. In January, three franchise-owned Jiffy Lube service centers opened in the Southwest including Maricopa, Arizona; Las Vegas, Nevada; and Thornton, Colorado.

3.  Patrick Southwick, president of Jiffy Lube International, Inc., said, “Our strategic growth plan aligns with one of our key brand attributes, which is convenience. We want to ensure that Jiffy Lube meets consumers’ needs by offering the services they need to maintain their vehicle at a location convenient to their home or place of work.”

Teams Up With Muscular Dystrophy Association for Annual MUSCLE UP! Campaign

5.  At the beginning of August 2018, Jiffy Lube and the Muscular Dystrophy Association (MDA) teamed up for the seventh annual MUSCLE UP! campaign, which aims to help transform the lives of families affected by muscular dystrophy, ALS, and related muscle-debilitating diseases.

6.  Denny Reiner, director of marketing for Jiffy Lube International, Inc., said, “Jiffy Lube and its franchisees are passionate about giving back to the communities in which we live and operate, so we are enthusiastic to support MDA for the seventh consecutive year. The MUSCLE UP! program is a natural fit for Jiffy Lube because it draws parallels between the body’s muscular system and a vehicle’s engine structure.”

7.  Throughout the month of August, Jiffy Lube customers were invited to make a donation, at participating locations, of $3 or more to MDA, helping to fund programs for families in their community. In return, customers received a MUSCLE UP! savings book containing offers totaling more than $100 from Jiffy Lube and other national retailers, including Men’s Wearhouse, Fuddruckers, and Office Depot.

8.  One hundred percent of the funds raised benefit MDA and its life-enhancing programs such as state-of-the-art clinics and support groups, as well as the MDA Summer Camp, a week-long camp that provides opportunities for kids living with neuromuscular diseases to discover new interests, gain self-confidence, and experience the independence of being away from home in an environment where barriers do not exist.

9.  Since launching MUSCLE UP! in 2012, the campaign has raised more than $5.5 million in support of research and MDA services and has sent more than 2,750 children to MDA Summer Camp.

10.  Karen Lewis Alexander, executive vice president and chief philanthropy officer of MDA, said, “Support from partners like Jiffy Lube makes it possible to accelerate research to find urgently needed treatments and cures for muscle-debilitating diseases. In the past year, four new drugs have been approved by the FDA for the treatment of Duchenne muscular dystrophy, spinal muscular atrophy and amyotrophic lateral sclerosis (ALS). These are milestones that would not have been possible without the generosity of loyal Jiffy Lube franchisees, service center employees and customers. We are so grateful for our partnership.”

11.  Jiffy Lube was founded in 1971 by Edwin H. Washburn in Ogden, Utah. As full-service gas stations declined in the 1970s, Washburn saw an opportunity to open a specialty shop that focused on automotive oil changes. Throughout the 1970s, Washburn opened additional Jiffy Lube centers around Utah. In 1979, W. James Hindman, then-football coach at Western Maryland College, bought out Washburn’s seven franchises. Because of this, Jiffy Lube cites 1979 as its founding year.

12.  Hindman changed the company’s official name to Jiffy Lube International and relocated its headquarters to Baltimore, Maryland. National franchising of Jiffy Lube began immediately under Hindman’s leadership and by 1989, there were over 1,000 franchised locations across the United States.

13.  In 1991, Jiffy Lube became a subsidiary of Pennzoil. When Pennzoil and Quaker State merged in 1998, the 581 Q Lube stores were rebranded as Jiffy Lubes, which had 1,541 stores open at the time. Jiffy Lube continued to grow over the next few years and in 2002, Pennzoil-Quaker State was acquired by Royal Dutch Shell. Today, there are Jiffy Lube stores in the United States, Canada, and South America.