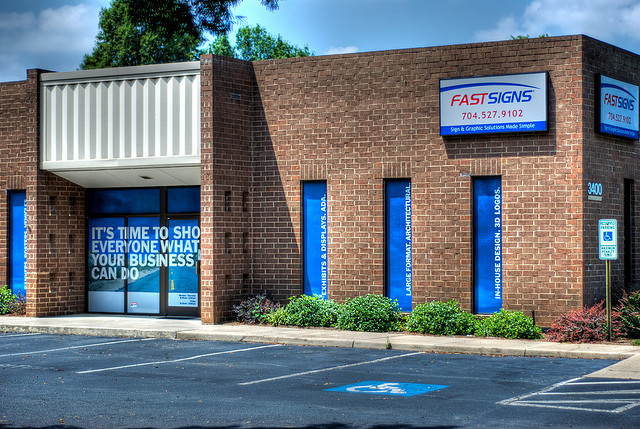 17 Things You Need to Know About the FASTSIGNS Franchise

1.  In early March 2019, LightBay Capital and Freeman Spogli & Co. announced that they had partnered together, along with management, to acquire FASTSIGNS International, Inc. David Burcham, managing director at LightBay, said, “The FASTSIGNS team has done a remarkable job building the company into the leading franchisor in the signage and visual graphics industry. FASTSIGNS provides substantial value to its franchisees through its experienced franchise support, training and marketing teams, helping its franchisees offer their customers customized products and value-add services. We look forward to partnering with Freeman Spogli and the management team to support the company in its next phase of growth.”

2.  Catherine Monson, chief executive officer of FASTSIGNS, added, “We are delighted to partner with LightBay and Freeman Spogli, whose franchising industry expertise, network of relationships and capital will be a valuable resource as we embark on a significant expansion of our footprint.”

3.  LightBay and Freeman Spogli were represented by Proskauer LLP as their legal counsel. FASTSIGNS was represented by Kirkland and Ellis LLP and Greenberg Traurig LLP as its legal advisors, and by North Point Advisors LLC and Harris Williams & Co. as its financial advisors. Ares Capital Corporation and other affiliated Ares Management funds provided senior debt financing to FASTSIGNS in connection with the acquisition.


4.  At the end of April 2018, FASTSIGNS announced its worldwide partnership with 1HUDDLE, a workforce training platform that converts unique training content into science-backed, quick-burst training games that are proven to accelerate workforce productivity. FASTSIGNS is the first in its industry to offer gamification as part of its support suite for franchisees.

5.  Mark Jameson, EVP of franchise support and development for FASTSIGNS, said, “We are thrilled to partner with 1HUDDLE to offer franchisees a mobile training platform that will propel our mission to position them for success and grow their businesses. FASTSIGNS’ training and support is unmatched in the industry and we know the 1HUDDLE platform will allow our franchisees to quickly onboard and train new employees in every aspect of their business – in a way that resonates with the growing workforce of millennials and Gen Z.”

6.  FASTSIGNS’ 1HUDDLE content will be focused on the franchisor’s proprietary training program and customer relations, both in-center, via telephone, and online. According to Sam Caucci, CEO and founder of 1HUDDLE, “Eighty-seven percent of what we learn in a live training or seminar, we forget within 30 days. And, currently, only 1 percent of training is done on mobile platforms. Training employees shouldn’t be difficult and 1HUDDLE is designed to make it fast, fun, and, most importantly, effective. In just three minutes a day, 1HUDDLE’s mobile-based training games are proven to accelerate your workforce’s productivity and we are confident FASTSIGNS franchisees will love the ability to train their employees using a single platform that tracks ROI and allows them to easily create new training games to keep their teams excited and engaged.”

7.  Near the end of October 2018, FASTSIGNS signed a master franchise agreement to expand to mainland Spain, the Balearic Islands, and Gibraltar. Chris Kirby, an existing FASTSIGNS franchisee, will develop a minimum of 10 locations, specifically targeting initial development in Barcelona, Madrid, Valencia, and Malaga.

8.  Mark Jameson, EVP of franchise support and development for FASTSIGNS International, Inc., said, “Earlier this year we visited Barcelona and Marbella and were immediately impressed with the welcoming business atmosphere and the potential for FASTSIGNS to flourish. Needless to say we are proud to announce Spain and Gibraltar as the latest addition to our aggressive international expansion. Chris has a very strong business acumen that has been proven over and over again, and we’re elated to have him pioneer the brand’s presence across this region.”

9.  Kirby joined FASTSIGNS in 2016 when he acquired an existing center in Boca Raton, Florida. Since then, Kirby’s business has been recognized as a top-performing center out of nearly 700 FASTSIGNS locations worldwide as a result of increasing sales by 370 percent in the first year. Originally from London, Kirby realized the growing need for signage and visual communications across Spain and Gibraltar and is excited to spearhead the brand’s international growth in these markets.

10.  Kirby said, “Having been a FASTSIGNS franchisee for two years and experienced record-breaking success, further expanding my investment in FASTSIGNS was a natural decision. As the brand continues to thrive in new international markets across the world, I am confident that the proven business model and unconditional support offered to franchisees will propel our success abroad as we embark on this new endeavor.”

11.  FASTSIGNS experienced strong international growth in 2018, including opening 24 locations in the U.S. and Canada, one in Chile, and two in Australia. FASTSIGNS is continuing to seek qualified candidates to grow its international footprint in markets throughout the world, including Europe, Brazil, Québec, North Africa, Southeast Asia, India, and Latin America.

12.  FASTSIGNS was founded in 1985 by Gary Salomon and Bob Schnanbaum in Dallas, Texas. Before starting FASTSIGNS, Salomon had visited a computer shop in Austin and saw how quickly the shop was able to produce vinyl signs. After promising not to open a competing business in Austin, Salomon and Schnanbaum convinced the store’s owner to train them on the new technology and signmaking techniques.

14.  FASTSIGNS grew quickly and within 5 years, the company had over 150 locations. In 1991, FASTSIGNS sold its first international franchise in the UK. Throughout the rest of the 1990s, FASTSIGNS continued to grow both domestically and internationally.

15.  In 2003, Roark Capital Group, an Atlanta-based private equity firm, acquired FASTSIGNS. A few years later, in 2008, Salomon announced that he was retiring from the company (Schnanbaum had already passed away) and Catherine Monson stepped in as CEO and president, a position she still holds today.

16.  In 2014, FASTSIGNS was sold again and purchased by Levine Leichtman Capital Partners, a Beverly Hills-based investment firm. In early March 2019, FASTSIGNS International, Inc. was acquired by LightBay Capital, Freeman Spogli & Co., and the company’s management. Today, FASTSIGNS has locations across the United States, Canada, the UK, the Cayman Islands, Mexico, the UAE, Saudi Arabia, Chile, and Australia (operated under the name Signwave).