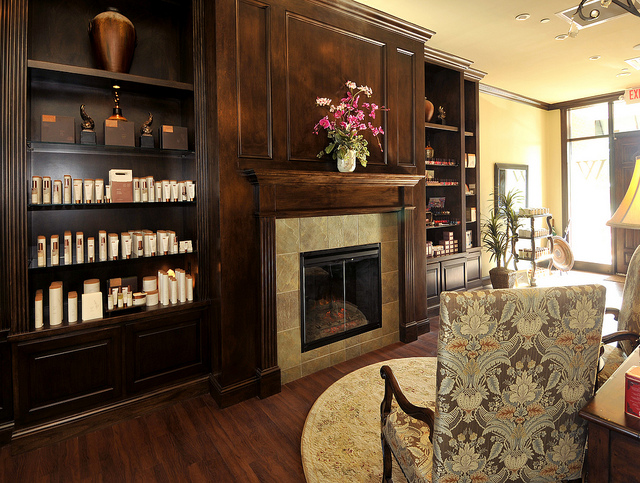 2.  Woodhouse Grand Rapids is owned and operated by husband-and-wife franchisees David and Michelle Pezzato. This location is the first Woodhouse Day Spa in the West Michigan region. David Pezzato said, “My wife and I are life-long residents of West Michigan, and we saw the need for a place where people can truly unplug. Woodhouse is unique, as guests will be able to experience a full-service, resort-style spa without having to leave Grand Rapids. In today’s hectic world, it is important that people remember to take time for themselves.”

3.  The Woodhouse Day Spa in Liberty Township is the third for the Southwest Ohio region and is owned by Chris Mann. Mann also owns Woodhouse Day Spa locations in the Hamilton County suburb of Montgomery and The Greene Towne Center in Beavercreek, and is also the regional developer for Ohio, Kentucky, Pennsylvania, and North Carolina locations.

4.  The Liberty Township Woodhouse Day Spa is the company’s first standalone location. According to Mann, the location he chose for the spa is perfect because it is directly between the spa’s Cincinnati and Dayton area locations. The Liberty Township location is almost double the size of each of those locations. Mann added, “The idea is to have a larger, standalone location that we can use for some of our larger groups and parties that we just can’t accommodate at our smaller lifestyle center locations.”

5.  In the same press release, Mann said he considers Woodhouse to be distinctive because of its luxury, unmatched customer service and because it is “a resort-destination spa, but in your own backyard.” He added, “We look at ourselves as slotting between a massage clinic that you might find in a strip mall and a Ritz Carlton. We’re much nicer than a clinic and as nice as a Ritz Carlton but without the pools and the Jacuzzi and all that stuff.”

6.  Mann also stated that Woodhouse Day Spas try to be involved with their local communities as much as possible. According to Mann, Woodhouse Day Spa already works with non-profit organizations like Susan G. Komen, the Make-A-Wish Foundation, and the Dragonfly Foundation. It is looking into partnering with the Wounded Warrior Project.

7.  Mann said, “When we opened our business, it wasn’t about making money, it was about providing people an escape and who needs an escape more than people that are going through tough times. We love to provide opportunities to those folks as much as possible and that’s always been one of our core values.”

8.  The Woodhouse Day Spa offers all of its customers the opportunity to join its rewards program. There are several ways for rewards members to earn points, which can be used to purchase services, retail items, or gift cards. One reward dollar is equal to one real dollar. Members can also receive bonus reward dollars for special events.

9.  Other ways to earn points include:

10.  The Woodhouse Day Spa was founded in 2001 by Jeni Garrett in Victoria, Texas. Garrett was only 21 when she started Woodhouse Day Spa, but she has always had a knack for business. As a teenager, she bought and sold cattle for her family’s ranch.

11.  When Garrett was in college, she learned the intricacies of duplicating processes within a service-based business while also maintaining consistencies within each center. Garrett loved spas and felt that she could use what she learned to build a successful business model in what she felt was a disorganized and fragmented spa industry.

12.  Garrett and her husband ended up buying a 1906 landmark home in Victoria, Texas, built by a railroad conductor whose last name was Woodhouse. They turned the house into the first Woodhouse Day Spa and named it after the home’s original builder/owner.

13.  In 2003, Garrett started franchising the Woodhouse Day Spa concept. The company continues to seek new franchisees across the United States.

Average Sales, Costs, and Expenses for the Reporting Company-Owned Spas for the Period from January 1, 2017 through December 31, 2017 (unaudited)