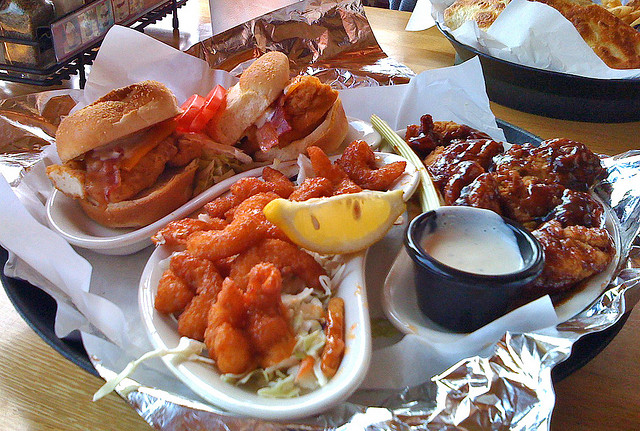 17 Things You Need to Know About the Applebee’s Franchise

1.  In mid-March 2018, Applebee’s Neighborhood Grill + Bar revealed that it had updated its To Go experience, making it easier for customers to bring their favorite menu items home. To celebrate the update, Applebee’s offered customers $10 off $30 on their next order on its website or mobile app for a limited time.

2.  Applebee’s was one of the first restaurants in its category to offer Carside To Go and now thanks to a redesigned mobile app and online ordering platform, options for Applebee’s To Go are faster and more accurate. Customers can quickly come inside and grab their meal for carry out or choose Carside To Go at participating restaurants to get their meal delivered straight to their car. No matter the method, Applebee’s new To Go packaging ensures the meal remains hot and tasty outside of the restaurant.

3.  Scott Gladstone, vice president, strategy and off-premise at Applebee’s, said, “Applebee’s To Go has undergone a makeover aimed at better serving guests, with updates to the mobile app and website, the introduction of new To Go packaging and an elevated focus on operational execution, all done to improve the guest experience. These enhancements are paving the way for new innovations in the To Go space that will enable Applebee’s to continue evolving its excellent service and be more competitive in off-premise eating occasions.”

4.  At the end of January 2018, Applebee’s Neighborhood Grill + Bar announced the addition of Joel Yashinsky to its leadership team as senior vice president and chief marketing officer. With more than 20 years of experience in the restaurant industry, Yashinsky brings a wealth of knowledge and insight from his previous marketing roles and will report directly to John Cywinski, president of Applebee’s.

5.  Cywinski said, “What I value most about Joel, other than his restaurant marketing experience, is his strategic capability and belief in franchisee collaboration. Joel is a smart, creative, mature and highly-regarded executive with a deep operational orientation. He has also successfully navigated two turnarounds within his McDonald’s tenure, which will serve him well. Bottom line, culture and team are important to Joel, and he fully understands the intensely competitive nature of this industry and our particular opportunities here at Applebee’s.”


6.  In his new role, Yashinsky will have oversight of all aspects of Applebee’s marketing, including strategic positioning, marketing plan development, media, advertising, merchandising, beverage innovation, and public relations. In addition, he will lead the Franchise Marketing Committee in partnership with franchisees.

7.  Prior to joining Applebee’s, Yashinsky held a variety of positions with McDonald’s. Most recently, he served as the marketing vice president for McDonald’s USA, overseeing the brand’s U.S. marketing calendar, promotions, advertising, sports marketing, and agency relationships. Before joining McDonald’s USA, Yashinsky led the brand’s Canadian division as chief marketing officer. He holds a bachelor of arts degree from Bowling Green State University.

8.  In early November 2018, Applebee’s Neighborhood Grill + Bar announced the return of a customer favorite limited-time offer — Bigger, Bolder Grill Combos. With Bigger, Bolder Grill Combos, customers get the choice of five delicious grill combinations each served with a number of sides starting at only $12.99. All entrees are served with steamed broccoli, garlic mashed potatoes, signature coleslaw, and crispy onions.

10.  In the same press release, Applebee’s announced that it was also introducing Applebee’s Catering in time for the holidays. Catering portions are served in party-ready packaging and serve parties of six or more at prices starting at less than $10 per person.

11.  According to Joel Yashinsky, chief marketing officer of Applebee’s, “With the pressures of holiday spending and entertaining just around the corner, we know our guests are looking for delicious dishes both in-restaurant and at home at a great price. We brought back Bigger, Bolder Grill Combos, because it’s perfect for date night while the in-laws watch the kids, but if you’re feeling festive and need to feed the masses at home, we have you covered in a big way with our new Applebee’s Catering. I’d love to tell you more, but I’m heading to pick up my catering order for the game tonight.”

12.  Applebee’s Neighborhood Grill + Bar was founded in 1980 by Bill and T.J. Palmer in Atlanta, Georgia. The restaurant was initially called Applebee’s Rx for Edibles & Elixirs. After opening a second location, the Palmers sold the Applebee’s concept to W.R. Grace and Company.

13.  Bill Palmer remained involved with the company and was appointed president of the Applebee’s Division, an indirect subsidiary of W. R. Grace and Company. Palmer helped start the franchise system for Applebee’s and in 1985, Palmer became an Applebee’s franchisee himself and went on to own more than three dozen restaurants.

15.  At the beginning of the 2000s, Applebee’s updated its menu and opened its 1,250th location. Over the next few years, Applebee’s continued to open new restaurants around the world and in 2007, it was acquired by the IHOP Corporation.

16.  Beginning in 2010, Applebee’s started a brand revitalization, which included changes to the restaurants such as remodeled interiors and exteriors with warmer color tones and a contemporary design; features specific to the neighborhood the restaurant serves; service improvements; and new food and drink selections. Applebee’s set out to complete this revitalization across its entire system in 2014.