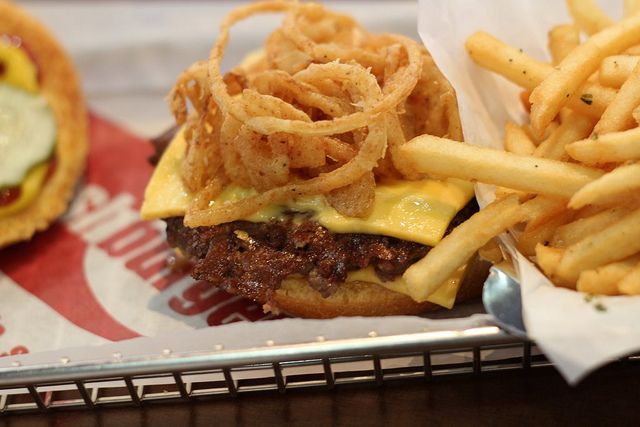 14 Things You Need to Know About the Smashburger Franchise

1.  In early February 2018, Smashburger announced that Jollibee Foods Corporation (JFC), Asia’s largest food service company based out of the Philippines, had agreed to acquire an additional 45 percent of the Smashburger brand for $100 million, bringing JFC’s ownership stake to 85 percent.

2.  Tom Ryan, co-founder and CEO of Smashburger, said, “Jollibee has been an invaluable strategic partner to date. Our momentum in 2017 around improved guest experience, iconic and record-setting product launches, and innovative marketing provide JFC a tremendously strong brand to enter the North American market. Our entire team couldn’t be more excited to grow the Smashburger brand and share the great tastes of Smashburger with the world.”

3.  With the expanded Jollibee partnership, Smashburger CFO Bradford Reynolds said growth in Southeast Asia is a focus. Reynolds added, “This reinforced strategic partnership with JFC will allow Smashburger to continue to focus on growth in both existing and new markets including the opportunity to bring our great tasting burgers, fries and hand-spun shakes to Southeast Asia. We look forward to building upon our successful relationship to further bolster the brand as an international leader in the better burger segment.”

5.  David Martinelli, vice president of marketing at Smashburger, said, “Our fans raved about the original Smash Pass and have been begging for it to make a comeback. We wanted to elevate the experience for our most loyal fans and really give them a lot of burger for their buck. Getting more than $600 worth of burgers for just $100 really takes the sting out of the expensive holiday season.”

6.  The Smash Pass was only available for purchase for a limited time. In order to purchase a Smash Pass, customers had to sign up for Smashburger’s SmashClub rewards program. As a bonus, any customer who purchases a Coca-Cola fountain beverage when using their Smash Pass will automatically be entered to win an all-expense paid trip to Las Vegas for two.

7.  Smashburger was founded in 2007 by Tom Ryan and Rick Schaden in Denver, Colorado. Both Ryan and Schaden were fast-food industry veterans. Ryan helped to develop the stuffed crust pizza concept at Pizza Hut and later became chief concept officer for McDonald’s. Schaden was a former owner of Quiznos.

8.  After leaving their previous careers, Ryan and Schaden founded Consumer Capital Partners and envisioned a quick-service restaurant that served a higher-quality burger. Ryan and Schaden bought a Denver restaurant called Icon Burger so they could use the kitchen to experiment with cooking and management techniques. They decided to name their new concept Smashburger after the way they cooked the burger, which was smashed on a flat top grill at a high heat.

9.  From the beginning, Smashburger was created with quick scalability in mind and Ryan and Schaden started franchising Smashburger a year after the first location opened in Denver. Smashburger then spread to Houston, followed by Minneapolis, which were places that Ryan and the company’s other founding management were familiar with.

10.  The company grew quickly and by 2011, there were 143 Smashburger locations, half of them franchises, and $54 million in revenue. That same year, Smashburger opened its first international franchises in Kuwait, Saudi Arabia, and Bahrain.

11.  Over the next few years, Smashburger continued its strong growth and in 2013, the company secured a $35 million debt facility from Golub Capital. Smashburger used this new capital, as well as the revenue generated by business operations, to support further expansion.

12.  In 2015, the Philippine-based quick-service operator Jollibee Foods Corporation announced that it had acquired a 40 percent stake in Smashburger for $100 million. Smashburger hit a bit of a slump in the following years as consumer trends started to shift. The company decided to scale back its expansion strategy and bought back some franchises in several major markets.

13.  In early 2018, Jollibee, which already had a 40 percent stake in Smashburger, increased its ownership stake to 85 percent in another $100 million deal. With this acquisition, Smashburger plans to further expand its presence in Southeast Asia. Smashburger now has locations in 37 states and 9 countries.