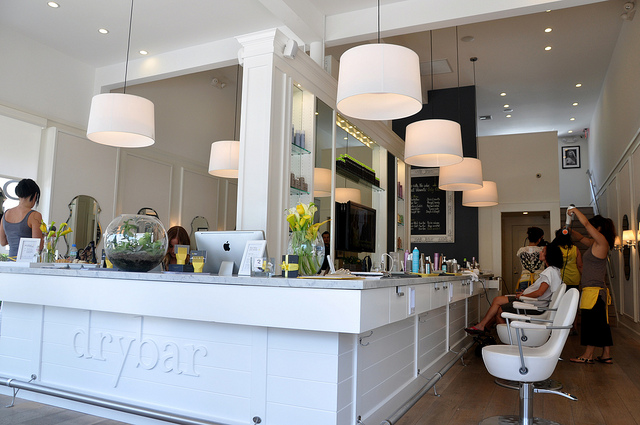 14 Things You Need to Know About the Drybar Franchise

1.  In early October 2017, Drybar unveiled a new styling and product concept shop in Bethesda, Maryland. It is the first Drybar salon to include a six-chair styling area where customers can choose from a menu of styling services. Another unique feature of the new concept shop is the upfront product area, where customers can try on more than 40 items and experience a complimentary consultation with a Drybar expert.

2.  Although the concept store has new features, it will still have facets of the original Drybar concept, including the 12-chair blowout and shampoo stations. Services will be available on a walk-in basis, with customers checking in via Drybar bartenders who walk around with iPads.

3.  Drybar founder Alli Webb attended the launch party for the Bethesda location and said that the Drybar product line now accounts for 30% of the business, so the new space is a great way to highlight these items.

4.  Webb added, “When we first launched our products and tools, we thought they would be used exclusively by our stylists in the shop. It’s been a wonderful surprise to see how our product business has evolved into a huge portion of our business. I am so humbled by the number of women who use our products and it never gets old to hear their favorites and the scents they can’t get enough of. Our new Concept Shop lets our clients explore more in-depth and play with the entire product line, as we’ve learned the value of being able to try before you buy in the beauty space.”

5.  Drybar will also be using the Bethesda concept store to test new products and services such as a Drybar-scented candle, which rolled out for the holiday season. When asked if other cities will be seeing similar stores, Webb said, “We’ve launched this store literally as a concept—we’re testing it out to see how it works! So we’ll see how it goes! I can say that the response thus far has been incredibly positive, and we’re excited to get feedback from our D.C. clients over the coming weeks and months.”

7.  According to Zola, Labor Day is the biggest wedding weekend of the year, so to celebrate, Zola and Drybar offered $10 off a blowout that was valid every Friday to Sunday from August 11 to September 3 (2017). Additionally, brides-to-be can now register for packages of one, two, and four blowouts, as well as an Uptini package.

8.  Shan-Lyn Ma, founder and CEO of Zola, said, “Zola brides and their guests are already visiting Drybar for their various wedding events, so this a perfect partnership. Guests will love giving this gift knowing that it will help brides feel extra special leading up to the big day.”

Collaborates With Too Faced to Launch Glitter Hair Spray

9.  In late July 2018, Too Faced Cosmetics announced that it had partnered with Drybar to release a new product as part of Too Faced’s 20th anniversary celebration. The cosmetics brand has created a glittery version of Drybar’s scented hairspray, and it is called the Drybar x Too Faced Glitter Spritzer. The hairspray, which debuted on August 1, is infused with gold and silver glitter to make hair sparkle and shine while holding it in place.

10.  Co-founder and chief creative officer of Too Faced Cosmetics Jerrod Blandino – who is friends with Drybar founder Alli Webb – said, “I love glitter in any shape or form. We were excited to make a product that was equivalent in the hair space to what [Too Faced] does in the makeup space. It’s a great marriage of the two brands.”

11.  Drybar was founded in 2010 by Alli Webb, her husband Cameron, and her brother Michael Landau in Brentwood, California. Before starting Drybar, Webb had been running a side business (since 2008) called Straight-at-Home, which offered in-home blowouts based on referrals in Los Angeles. As blowouts grew in popularity, Webb’s one woman business got too big and she recognized the need for affordable blowouts (the service usually costs extra at traditional salons). Webb approached her brother and husband with the idea to start a salon that focused solely on blowouts.

12.  A year after starting Drybar, the Webbs and Landau, with help from friends and family, raised $2.5 million to expand the business. Around this time, Drybar added several business luminaries to its list of investors and board of trustees, including Paul Pressler, former CEO of GAP and president of Disney, and Janet Gurwitch, the founder and former CEO of Laura Mercier Cosmetics.

13.  Since then, Drybar has continued to grow across the U.S. and Canada and even created its own line of Drybar products which are also sold at Sephora and QVC.