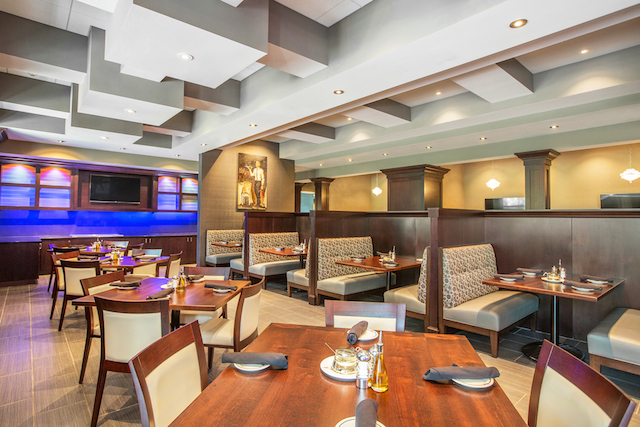 In this exclusive Q&A, we get to learn about Johnny’s Italian Steakhouse from its founder and CEO, Mike Whalen.

Franchise Chatter (FC): Can you tell us how Johnny’s Italian Steakhouse got its start?

Mike Whalen (MH): Johnny’s Italian Steakhouse was inspired by classic 1940 and 1950 supper clubs, and was founded on the belief that a great time never goes out of style. One of the most popular questions from our guests is “Who is Johnny?” Johnny is actually, not one, but two men who both helped shape and define our beloved restaurant.

Growing up during the dismal days of prohibition and the Great Depression in Valley Junction – what would become West Des Moines, Iowa – John Stamatelos often received 25 cents from government tax collectors to reveal the locations of his father’s corn moonshine stills. Happily accepting the cash, the youngster would then lead the G-men astray to spots where stills were long since abandoned.

After serving in the army during World War II, Stamatelos turned all those quarters into seed money as he converted his own house into Johnny’s Vets Club in December 1946. Since liquor by the glass was still illegal, he operated the club as a speakeasy.

Meanwhile, and also in 1946, Johnny and Kay Compiano opened Johnny and Kay’s Restaurant on the other side of town – a humble one-room dining area and bar with a maximum capacity of 32 people. Compiano’s love for cooking started in New Orleans while serving in the Coast Guard, and his iconic steak de burgo soon became a nightly attraction.

Staying true to his namesake which stems from the Italian verb for “to fulfill,” Johnny and Kay’s Restaurant would grow to become a state landmark with seating for up to 450 people.

In 2001, I was looking to start a new restaurant concept in the southside of Des Moines, Iowa and after much contemplation and the blessing from both Johnny’s families, Johnny’s Italian Steakhouse was born.


FC: How does Johnny’s Italian Steakhouse find continued success as a full-service restaurant in an industry that is quickly being saturated with QSRs?

MH: We have a different outlook on the full-service restaurant space, and pride ourselves on being unique and distinct. The brand is positioned between casual and fine dining concepts, creatively blending sophistication of the past with a modern edge. Taking center stage is an approachable menu designed for the casual diner to experience high quality steak, seafood and Italian cuisine options without the high price.

Our concept is a leading dining destination for an everyday indulgence which converges classic steak and Italian cuisine with a modern supper club atmosphere. Each Johnny’s location features a traditional speakeasy ambiance that is brought to life by entertaining service, stylish décor, and its trademarked Blue Bar where hand-crafted cocktails are skillfully prepared.

FC: What are some challenges/opportunities the brand has faced in the franchising sphere?

MH: What is unique about Johnny’s Italian Steakhouse is the untapped markets that the concept thrives in. Locations are often opened in more rural areas or smaller DMAs, which serves our concept well because we thrive on memorable experiences and word of mouth. We find our guests are typically locals in the area and become weekly regulars. Johnny’s Italian Steakhouse treats its guests and staff like family which results in strong relationships and sets us up for continued success year after year.

With several hundred new concepts being released into franchising each year, we place a great deal of emphasis on our qualities as an enduring concept. Being an enduring brand leads to being endeared by our guests.

I’ve always believed that life is much better when you pick who you want to “play with.” This industry is challenging at times and we strive diligently to support our franchise partners. Enjoying who we partner with makes it much easier to go the extra mile. I suppose that makes us quite selective, but in the end it’s worth it.

FC: What qualities does Johnny’s Italian Steakhouse look for in a potential franchisee?

MH: The ideal franchisee for Johnny’s Italian Steakhouse would be professionals with restaurant ownership experience, highly-accomplished operators, and those with full service hotel portfolios. Individuals who carry a driven mindset and can also embrace the ageless themes of Johnny’s, leading to success for themselves and the brand as a whole.

MH: We have our eyes set on franchise expansion and are looking to form long-lasting partnerships with experienced business owners and operators who are looking to invest in an enduring restaurant concept. Johnny’s Italian Steakhouse plans to have 24 units in the pipeline by the end of 2020.

Mike Whalen is the CEO of Heart of America Group, parent company of Johnny’s Italian Steakhouse.

Next post: The 6 Best Lawn Care/Landscaping Franchises of 2022 (Updated Rankings)