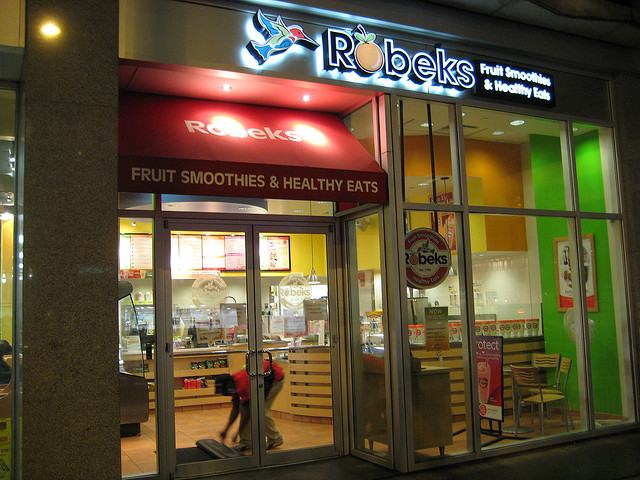 1.  One of the biggest factors driving the recent growth and success of Robeks Fresh Juices and Smoothies is its updated menu, which launched in the summer of 2017. The updated menu incorporates a new line of products with Robeks’ long-standing customer favorites. Robeks’ new menu is the product of in-depth data analysis, market trend analysis, customer feedback, and thorough vetting process with current Robeks franchisees.

2.  Matt Furman, director of marketing for Robeks, said, “We felt that with a change in the industry, especially as consumers are becoming more educated on various health attributes, we wanted to make sure that our product mix fit exactly what consumers were coming in our stores looking for.”

3.  This latest menu iteration at Robeks features a few new categories of products, one being a superfood-powered smoothie category with ingredients such as spirulina, flax seed, and turmeric that come together in tasty, unique recipes. They are also 100% dairy-free and 100% vegan.

4.  Furman added, “Customer feedback is very important to us, and we listened very closely when our fans started to request menu options that are dairy-free and vegan friendly. We found that over 70% of customers felt smoothies with superfoods were appealing and over 70% indicated a likelihood to purchase one. We responded to that input with innovative and delicious recipes to help satisfy the demand.”

5.  Other alterations to the menu include brand new bowl offerings, which are larger and “easier to eat.” David Rawnsley, president of Robeks, said, “We’ve seen tremendous growth in the bowl segment and worked to make sure our bowls met our customer’s demands. We paid close attention to every aspect of the bowl – from the recipe of the base to the design of the toppings. That attention to detail has resulted in a mouth-watering product when you look at it.”


6.  Rawnsley also believes the new menu, concentrated on innovation and a diverse mix of offerings, will help increase sales. A 10-store test conducted across 6 different markets yielded positive sales results for the test locations when compared to the rest of the stores in their trade area.

7.  At the beginning of February 2018, Robeks Fresh Juices and Smoothies launched a new online ordering program allowing customers to place an order from their desktop or mobile devices. The cornerstone of the program is a new mobile app that is now available to the public. After completing a smaller pilot program that was launched towards the end of 2017 at select locations, the restaurant chain was ready to launch its latest digital initiative nationwide.

8.  David Rawnsley, president of Robeks, said, “This is a big step for us and a great convenience for our customers. Our mobile ordering initiative follows two other recent initiatives aimed at improving our customer experience. We launched a new menu this past summer with the introduction of our Superfood smoothies and a completely revamped and expanded Acai Bowl offering. In addition, our remodel program is gaining momentum and we expect roughly half our stores will operate in our latest generation design by the end of 2018.”

9.  In addition to online ordering, the Robeks Rewards loyalty program was fully integrated into the online initiative. The loyalty program is points-based with 12 points equaling one “rewards dollar” that can be put toward any in-store purchase and now online purchases as well. Loyalty members also receive a free small classic smoothie on their birthday.

10.  John Schattinger, director of technology for Robeks, said, “Beyond just making online ordering available, we wanted to ensure our current and new loyalty customers were still being rewarded for shopping with us. We’re excited about all the new features we’re going to be bringing to them with our online ordering program.”

11.  During the first quarter of 2018, Robeks Fresh Juices and Smoothies announced that it expects to open 12 new locations across the country this year and anticipates having 100 locations by 2019. To help spur the company’s growth, Robeks introduced a new menu in 2017, which brought with it an average sales increase of 10% to stores that embraced the change. Robeks also recently launched a new online ordering program and made changes to its executive team.

13.  David Rawnsley, president of Robeks, said, “Robeks is built on a solid foundation of franchisees dedicated to providing fresh juices and smoothies to customers, so we feel the time is right to expand on that foundation and grow the brand. We used 2017 as an opportunity to assess the brand, identify areas for evolution and begin expansion, and now that 2018 is here we’re full steam ahead.”

14.  Robeks Fresh Juices and Smoothies was founded in 1996 by David Robertson, a former investment banker, in Los Angeles, California. Robertson was looking for healthier fast food options and wanted to find a smoothie that was healthful, nutritious, and tasted good. He started making smoothies at home using fresh, high-quality ingredients and felt that other people were seeking the same kind of smoothies. Robertson established Robeks to provide customers with access to his healthy and delicious smoothies.

15.  Within a few years, Robertson opened a few more Robeks locations, and franchising started in 2001. The first franchised location, owned by Peter Bickford and his wife Katrina, opened in New England. At the company’s peak in the mid-2000s, there were nearly 200 Robeks locations in the U.S. In the years that followed, Robeks closed numerous stores but is on track to have over 100 locations by 2019.

16.  Robeks Fresh Juices and Smoothies did not rank on Entrepreneur’s 2018 Franchise 500 list.

Data for Franchisee-Owned Stores for the 53 Weeks Ending December 31, 2017

Next post: Q&A: Marijuana Mogul Christian Hageseth on Moving Into the Franchise Space