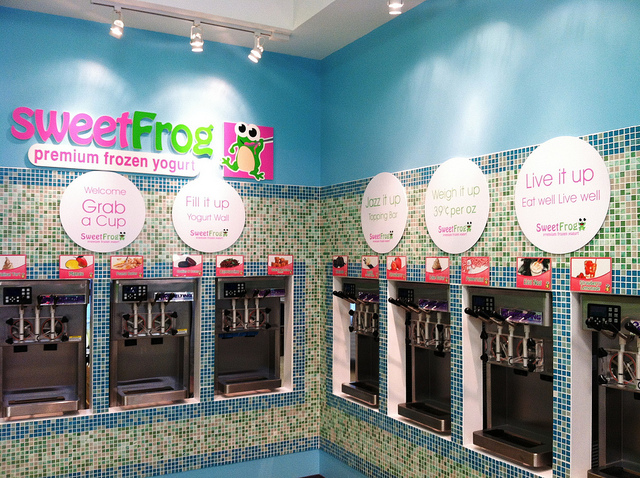 2.  Patrick Galleher, CEO of sweetFrog, said, “We’ve developed multiple different franchise opportunities that allow our franchise partners to make sweetFrog accessible to customers in any market. We’ve recently launched a series of mobile truck and trailer franchise operations and our very first location on a military base will open shortly. The fantastic franchise partners operating these mobile and non-traditional locations will create success stories we can replicate in national and international markets. We’re proud to offer the most creative franchise opportunities in the industry and are excited to help countless future franchise owners launch the appropriate sweetFrog franchise model for their local customer base.”

3.  The brand said that it is not going to slow down in 2018 and announced plans to open several new locations in Q1, including shops in Lynchburg and Forest, Virginia; Sevierville, Tennessee; Timonium, Maryland; and Ft. Belvoir, Virginia. sweetFrog’s other franchise development goals for 2018 include opening 25 to 35 new locations, opening 5 mobile locations, signing 5 non-traditional agreements, and opening 2 new international locations.

4.  Shemar Pucel, director of franchise marketing and development for sweetFrog, said the brand’s 2018 goals were “lofty, but attainable.” Pucel added, “We are looking to continue to enter new markets and build up locations through Texas, Florida and California. At the end of 2018, we expect to have 400 open locations, including two or three new states, like New Jersey. An emphasis on rebrands and acquisitions, and a continued push for more mobile and non-traditional locations, will allow us to put our franchise owners in the best position for success.”


5.  Part of sweetFrog Premium Frozen Yogurt’s growth strategy is to make nationwide acquisitions of smaller frozen yogurt franchises and re-brand these locations as sweetFrog shops. At the end of April 2018, sweetFrog acquired five New York-based Hoopla Frozen Yogurt locations in Camillus, Middletown, New Hartford, Newburgh, and Poughkeepsie. The takeover represents the first of many acquisitions sweetFrog hopes to complete in 2018 as the brand remains committed to an aggressive acquisition and rebranding strategy.

6.  Patrick Galleher, CEO of sweetFrog, said, “It’s a win-win for all parties involved. Acquiring these existing locations in New York is a cost-efficient way for us to expand in an area where customers already love our brand and products. Plus, we have the benefit of maintaining the staff at each location where employees have built-in rapport and established relationships with local customers.”

7.  After the acquisition, sweetFrog immediately started to work on updating the Hoopla locations. The brand said that there would be no down-time or store closures for re-modeling because Hoopla and sweetFrog stores possess similar layout designs and real estate expectations. All five stores were completely re-branded with new signage by the end of May. Galleher added that he was confident that the Hoopla acquisition would fuel further regional growth for sweetFrog.

8.  The brand is focused on completing additional acquisitions in Dallas-Fort Worth, Southeast Florida, and along the South Carolina coast, among other areas.

9.  During the entire month of May 2018, sweetFrog Premium Frozen Yogurt offered discounts to honor local families, teachers, and military service members. In addition to the month-long celebration, on May 5, sweetFrog had a Cinco de Froyo deal which offered a 16-ounce cup of yogurt for $5.55. Customers were also invited to connect with sweetFrog (@sweetFrog) on social media with the hashtags #cincodefroyo and #cincodemayo.

10.  To show its appreciation of the U.S. Armed Forces, every Monday in May (starting with the 7th), participating sweetFrog locations offered a 20 percent discount to active and retired service members to commemorate Military Appreciation Month. Additionally, during Teacher Appreciation Week (Monday, May 7 through Friday, May 11), sweetFrog rewarded local educators with a 10 percent discount.

11.  Patrick Galleher, CEO of sweetFrog, said, “sweetFrog is the nation’s leading family-friendly dessert destination, so we look forward to having countless families stop by on May 5th for their $5.55 Cinco de Froyo masterpiece. Beyond that, we love giving back to all of the hardworking teachers and veterans who deserve our support each May and throughout the year. Teacher Appreciation Week and Military Appreciation Month are two of our favorite holidays – teachers and servicemen and women have a tough job, and they’ve sacrificed a great deal; we want them to know they’re an important part of our communities.”

12.  The first sweetFrog Premium Frozen Yogurt location was opened by entrepreneur Derek Cha in 2009 in Richmond, Virginia. Although the United States had just entered into the recession at the time, Cha felt that it was the right time for him to enter the frozen yogurt market. Frozen yogurt shops were primarily located on the West Coast at that time, and Cha wanted to introduce the self-serve frozen yogurt concept to another part of the country.

13.  Cha, who is religious, said that sweetFrog was founded on Christian principles and that the “FROG” part of the company’s name stands for “Fully Rely on God.” According to Cha, he relied on faith, prayer, and support from friends and family to open the first sweetFrog location. Fortunately, Cha’s risk paid off and the first sweetFrog shop was a success.

14.  sweetFrog Premium Frozen Yogurt has a similar concept to other frozen yogurt shops, with customers picking their own flavors and toppings. The brand hopes to stand out in the frozen
yogurt space by using mascots, namely two cartoon frogs named Scoop and Cookie. Every sweetFrog location sells the brand’s merchandise which features its mascots.

15.  In early 2012, Boxwood Capital Partners, LLC announced that it had made a growth capital investment in sweetFrog Enterprises, LLC. This minority investment was used to start franchising and to fuel sweetFrog’s domestic and international growth. Subsequent to the investment, James Patrick Galleher, the managing director of Boxwood Capital Partners, became the chief executive officer of sweetFrog Enterprises, LLC.

Part 1 – Historic Average and Median Net Sales of Select Franchised Shops Along With High and Low Net Sales by Date Range for Date Ranges From January 1, 2017 to December 31, 2017

Next post: How Much Is a Salons by JC Franchise? (Detailed Franchise Costs)