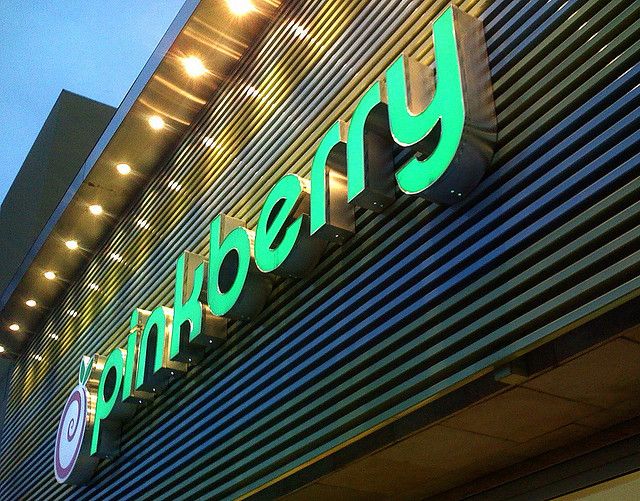 13 Things You Need to Know About the Pinkberry Franchise

1.  At the beginning of July 2018, Pinkberry launched a new menu item as part of its licensing agreement in support of Universal Pictures’ Mamma Mia! Here We Go Again film. To promote the new movie, Pinkberry has created Mamma Mia! Mango, a special limited-time combination featuring the new Passion Mango tart frozen yogurt flavor, along with fresh cut mango and honey almond granola. Pinkberry also gave fans of Mamma Mia! a chance to win a trip for two to the London premiere of the movie by entering a sweepstakes on Pinkberry’s website.

2.  This isn’t the first time that Pinkberry has partnered with Universal Pictures to promote one of its movies. Last fall, Pinkberry held a contest for fans to win a trip for two to attend the premiere of Pitch Perfect 3. To enter the contest, fans were asked to take a picture of their favorite Pinkberry swirl, give their creation a name related to the movie, and share it on social media using the hashtag #PitchPerfectPinkberry.

3.  Pinkberry often engages with its customers and listens to feedback through several channels, including the brand’s Bring Back My Swirl Survey. In early March 2018, Pinkberry announced that customers voted for the return of their favorite frozen yogurt from 2017, Meyer Lemon. The popular flavor first debuted in spring 2017 and became an instant hit. The flavor became even more popular after being mentioned by Oprah Winfrey on social media.

4.  Meyer Lemon returned nationwide for a limited time until April 26, 2018, but local stores have the option to continue carrying the flavor after the promotion ends. To celebrate the flavor’s comeback, Pinkberry created a new combination, Lemon Berry Tart, which features vanilla wafer cookies, blueberries, and whipped cream.


5.  Melissa Hubbell, director of marketing for Pinkberry, said, “Our fans let their cravings be heard and Pinkberry is making sure they’re satisfied. Meyer Lemon is truly a stand out flavor; it’s no wonder fans wanted it back. In fact, lemon is trending this year and is a go-to flavor for desserts, so we couldn’t be happier to have Meyer Lemon return to our menu as a refreshing springtime treat.”

6.  To celebrate National Frozen Yogurt Day on February 6, 2018, Pinkberry offered a special buy-one-get-one-free deal and bonus prize for all Pinkcard rewards members, including a chance to win three free Pinkberry swirls. The BOGO deal was good for an original frozen yogurt with toppings, of equal or lesser value.

7.  Additionally, Pinkcard rewards members who made any purchase on National Frozen Yogurt Day randomly received one of six unique bonus prizes, which were loaded to their loyalty card or account. Prizes included free toppings, additional BOGOs, double points, and one, two, or three free swirls with toppings. In order to receive the BOGO deal and bonus rewards, customers needed to have a registered Pinkcard account.

8.  Melissa Hubbell, director of marketing for Pinkberry, said, “This great deal is our way of rewarding our loyalty members and thanking them for being our devoted fans. Being a Pinkcard member truly has a lot of perks and it’s so easy and free to join. We encourage all frozen yogurt fans to sign up and celebrate National Frozen Yogurt Day with us and continue earning rewards all year long.”

9.  The first Pinkberry store was opened in 2005 by Shelly Hwang and Young Lee in West Hollywood, California. Hwang and Lee initially tried to open a formal English tea house at the site they selected for their new business venture but were unable to secure an alcohol permit from the city. They went with their backup plan, which was to open a frozen yogurt shop reviving the frozen yogurt craze from the 1980s. Pinkberry was immediately successful and so popular that customers were waiting up to 30 minutes in line.

10.  In 2006, Hwang and Lee started franchising the Pinkberry concept and the second store opened later that year. After receiving a $27.5 million investment from Maveron, the venture fund founded by Starbucks founder Howard Schultz, Pinkberry started expanding across the United States. Around late 2009, Pinkberry opened its first international location in the State of Kuwait.

11.  Inspired by Pinkberry’s initial success, numerous frozen yogurt franchises started popping up around the country and saturated the market. This has led to a decline in Pinkberry’s popularity and number of locations.

12.  In 2015, Pinkberry was acquired by Kahala Brands and its headquarters was moved to Scottsdale, Arizona. Hwang still serves as Pinkberry’s chief product officer and board director, while Lee stepped down from the company following personal troubles.

All Stores – Franchised and Corporate

Next post: The Best Travel Agency Franchises of 2022 (Updated Rankings)